The core of Legion is a baby, currently inside the womb of Charlie (Adrianne Palicki). That child is the savior of humanity, or at least that is what angel Michael (Paul Bettany) tells the audience. Being one of God’s big time angels, you sort of take what he says as truth, but you think he would have the common courtesy to explain this.

Charlie is pretty average, living in a trailer and working at a small diner. The baby’s father has left to parts unknown, and the apocalypse is right around the corner. If this child is not born, humanity dies. Apparently, that unnamed, unseen father has some ultra/mega sperm that creates the planet’s new savior… a better explanation than anything in this script.

Legion makes absolutely no sense. None. Zip. Nada. You cannot take what is presented in this story, mash it up, flip it around, and make it so. You can’t even stretch logic to help it out. God, as portrayed here, is an idiot. This is a higher power that can create all of life, the planet, and galaxy, yet takes the longest route possible to kill one baby. Instead of sending a flood or Earth-swallowing fire, he sends a bunch of angels to posses people who (wait for it) can’t go near the child once it is born. Huh? None of God’s angels are efficiency experts apparently, although couldn’t he just create an efficiency expert?

Anyway, so Michael decides God’s plan to wipe out humanity is harsh…. Oh wait. Why is God sick of humanity? That is never clear either. Legion bookends with narration from Charlie, something about God being sick of our “bullshit,” and Michael states wars and racial intolerance being an issue. One would think those problems, which have existed since, well, forever, might have angered him a little earlier after Noah’s Ark.

The pure idiocy of this script comes into play early. Michael arrives at this small diner during the day, which serves as the location for this tripe. He hands everyone a weapon, tells them to get ready for “him,” and moves inside. Like clockwork, everyone begins pushing furniture up against doors, flat out dumb since the diner has full picture windows. Anyway, they apparently move this furniture all night long, and then, with the sun down completely, Bob (Dennis Quaid) finally asks who they are waiting for.

To clarify any confusion, yes, it takes hours before anyone finally asks who “he” is, yet they react panicked and stricken with fear long before they have an answer. The script, co-written by Peter Schink and Scott Stewart, provides countless catchphrases and one-liners, yet not a lick of explanation or common sense. All of the exposition is pointless when the audience lacks a connection to these characters because they’re still trying to grasp how anyone could portray the almighty behaving so stupidly. 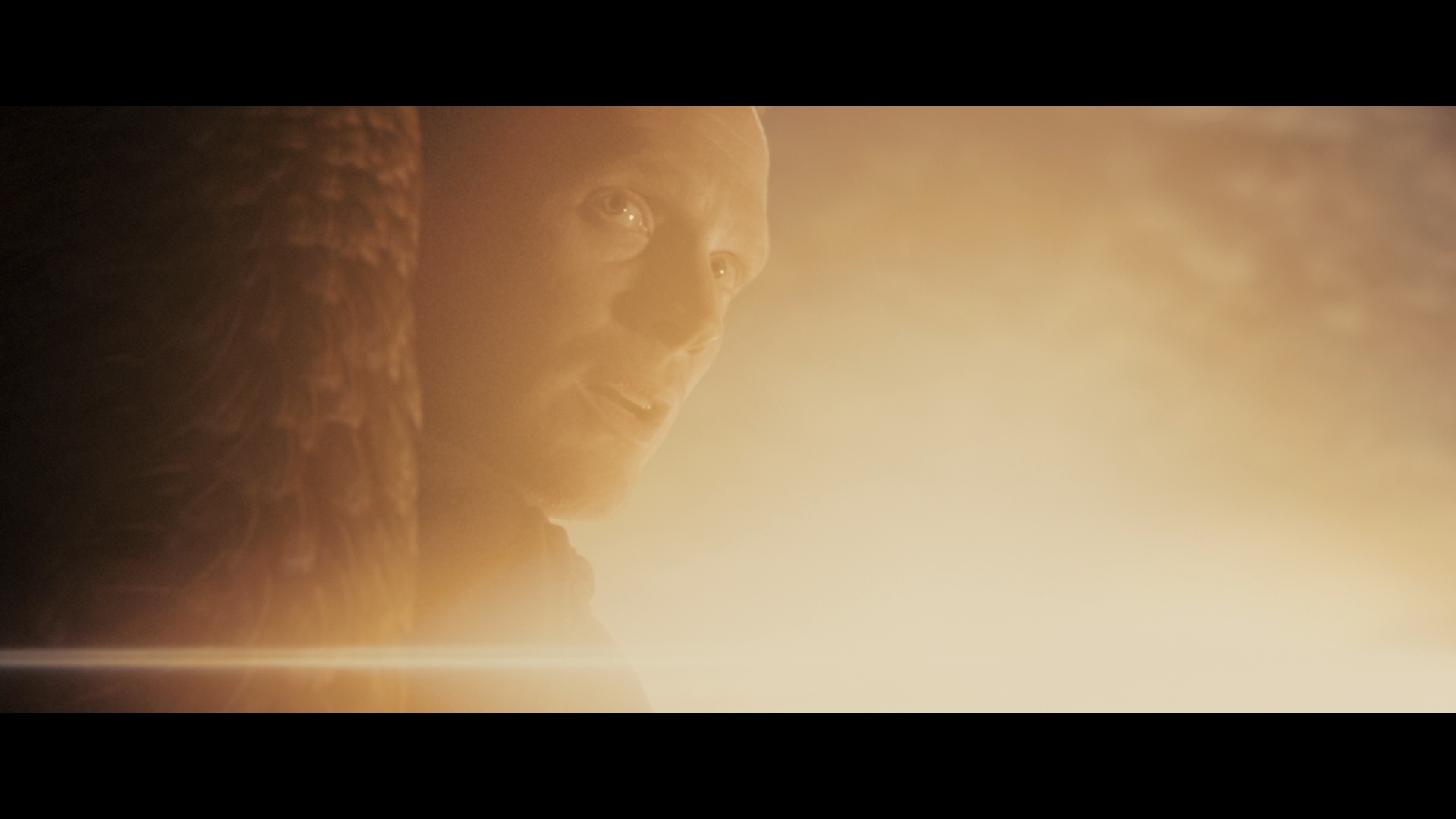 Legion comes to Blu-ray from Sony in an indistinct, mundane AVC encode. It is not terrible, just oddly uninspired. Part of that may be the flat, lackluster black levels. For a dark film, limited depth is established, robbing the movie of dimensionality. Few scenes ever appear striking.

It seems as if a hint of artificial sharpening has been applied. Ringing around high contrast edges is inconsistently notable, although certainly there. Grain seems heightened in many scenes, including the very first shot of the film. Clouds in this sunset are noisy, the pronounced grain becoming an issue. Generally, it remains in control, with a few exceptions. Again the sky is a bother at 53:53, producing noise. Banding is severe at 1:19:17 against the smoke throughout the scene, and the battle between Gabriel and Michael likewise suffers from noise, although the editing is so fast, it can be difficult to see.

Certain sequences carry a slightly processed look, possibly a result of the visual effects as well. When the police officer first encounters Michael and is possessed, his face shows high fidelity detail, but lacks full definition. Most will not even notice. This is the only notable scene where this occurs. Even under low-light situations, the transfer provides exceptional skin and clothing texture. In daylight, the transfer is even stronger, producing resolved pebbles on the desert ground in every shot outdoors.

Colors are generally muted, fitting into two palettes. Early scenes of the diner are distinctly warm, while many scenes post apocalypse are rich in blues and whites. The neon sign standing on the roof of the diner lights up a vibrant green at one point, leading to small compression artifacts, yet a fantastically rich color. Explosions are bright and satisfying.

Like the video, the DTS-HD mix supplied for the film is wildly inconsistent. As cars begin to pour into the area of the diner, two of them collide and explode, the bass being nearly non-existent. Later, as Michael and Gabriel battle it out, their punches land with a furious thud, at least a larger one than the explosion did. Go figure.

That’s not to say all of the explosions are disappointing. A particularly large one at the end of the film, which cannot be detailed because of spoilers, delivers a fine low-end assault, easily one of the best audio moments of the film. Surround use is aggressive, even before the attack begins. High desert winds rattle objects and generate a small presence at all times.

Gunfire is punchy and forceful when it wants to be, while also generating a clear, distinct high-end as bullets fly. There is little question the action is impressively calibrated despite the inconsistencies. As a possessed human gets inside the diner, everything goes silent except for its speedy movements throughout the soundfield. Positioning is superb, and even a bit creepy. The limited score is a bit low in the mix, although still clear and free of problems. Dialogue remains firm.

Bringing Angels to Earth is a picture-in-picture feature, loaded with commentary, storyboards, and behind-the-scenes stuff, a fine way to kick off the bonuses. Creating the Apocalypse and From Pixels to Picture details the visual effects, totaling around 35-minutes together. Humanity’s Last Line of Defense is an 11-minute look at the actors and their characters. Movie IQ, typical Sony BD-Live support, and trailers are left.