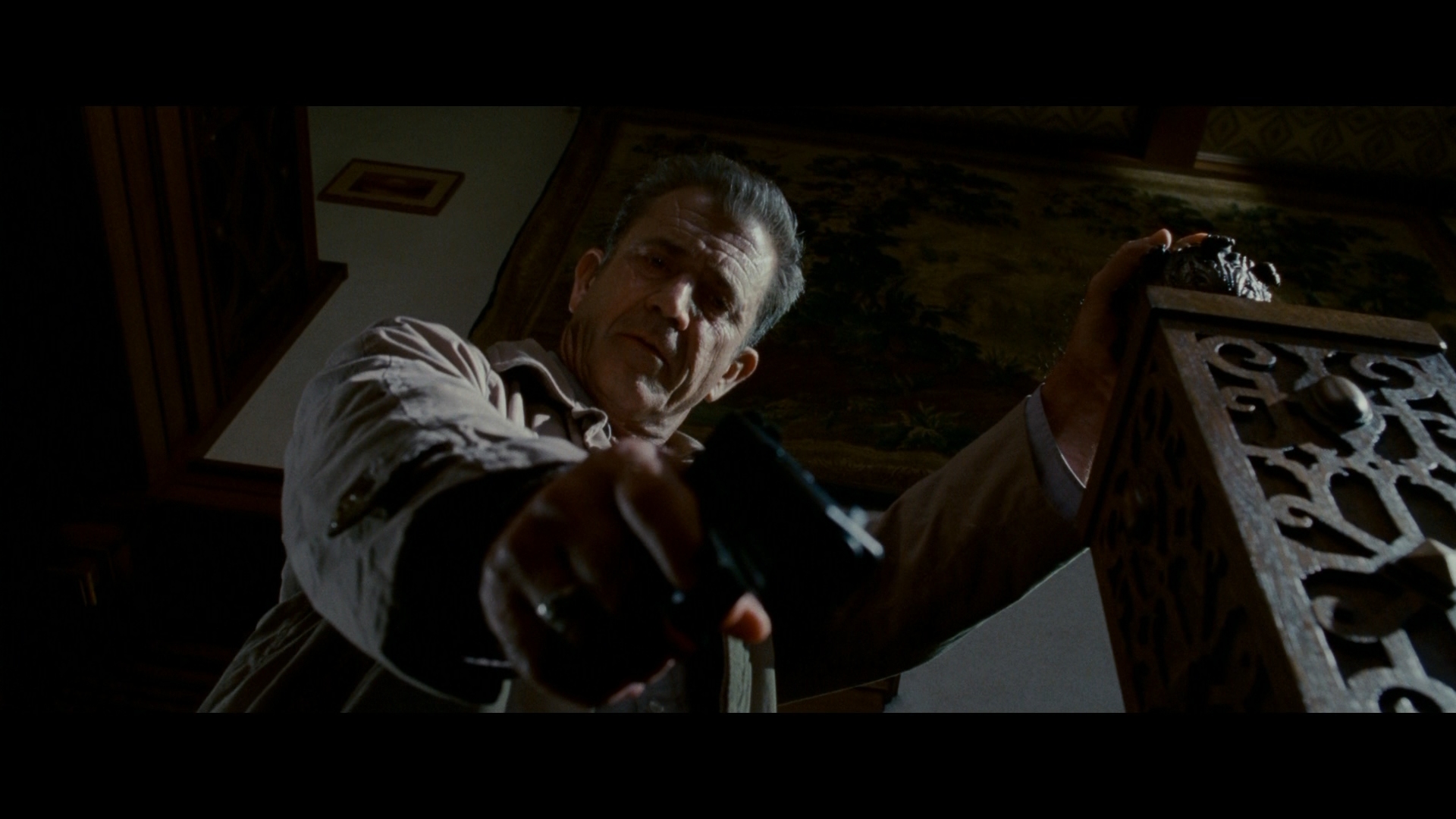 Mel Gibson. What can be said for the man as an actor? How about, he should never, ever try to pull off a deep Boston accent again? That works.

For a politically charged thriller that is trying to establish itself as legitimate, Gibson’s accent as Massachusetts detective Thomas Craven is laughable at times. In spots, it barely registers. Other times, it is so blatant you wonder if he is voicing a cartoon character, raising the pitch to absurd levels. It is a complete buzz kill to the brewing tension and drama while Craven attempts to discover who is behind the death of his daughter.

He has some fantastic scenes. Early on, as he mourns the death of his daughter, Gibson proves he still has it. He sits alone on his couch, staring at a blank wall, when one of his fellow officers tries to comfort him. Gibson’s expressionless face says it all, his few mumbled words perfectly believable and saddened… even with the accent.

Some will find the political side of Edge of Darkness offensive, certain connections to corporate head Jack Bennett (Danny Huston) made particularly clear. Hopefully, those people can look past any connotations and enjoy this well-crafted and complex film.

What starts off as a brutal murder takes its time to build. The first hour seems peppered with conversations that seem unimportant initially, but take on greater weight later. Action is sparse yet tense, especially as thugs begin chasing Craven down in a bathroom. Extensive gore leaves little to the imagination, without a doubt selling the numerous kills.

Edge of Darkness can feel clichéd, particularly a final scene where political advisors seem smitten with themselves. What better way to show them as evil? Danny Huston also has cliché written all over him, that corporate, cold-hearted hotshot who believes he is invincible behind his money. At the very least, he doesn’t have an accent. 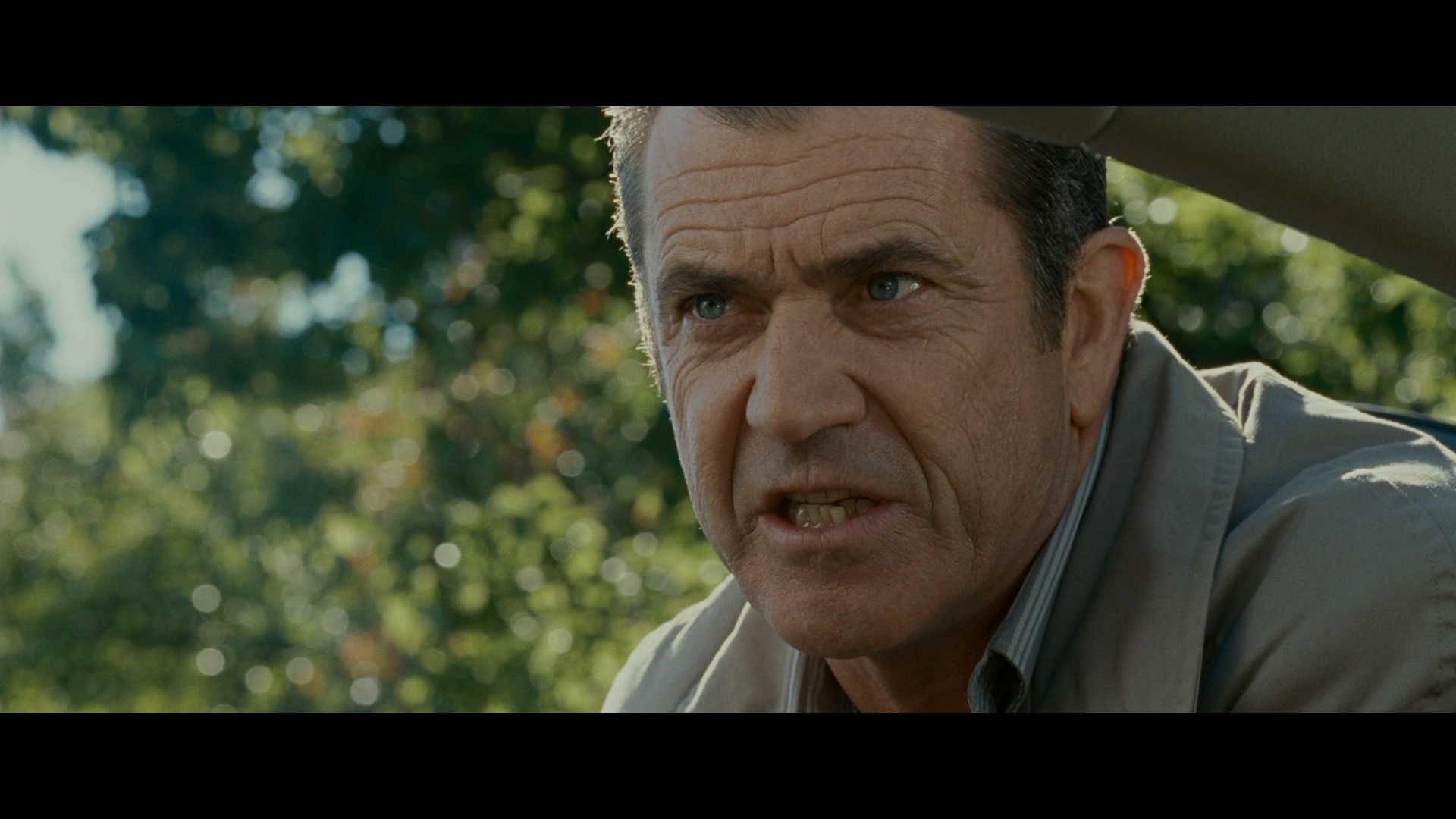 Warner releases Edge of Darkness to Blu-ray on a BD-25 with a VC-1 encode, and it looks like it was crammed on here. Without a doubt, the softness, lack of high fidelity detail, and some artifacting are a result of the low bitrate. The number of scenes that appear digital and processed are many, and they begin early.

Grain is limited throughout much of the film, hidden behind a layer of digital softness. Many faces take on a waxy, unnatural appearance. Picking up artifacting is not difficult, first noted on the wood floor at 5:35. Some drastic ringing is apparent around the shadow of the police car 8:34. Fine detail is merely sporadic and in no way consistent. Smearing can be seen when people turn their heads, more noticeable early on before Gibson begins his quest. Those rare scenes where facial detail is exceptional (watch Ray Winstone at 1:04:12) are impressive, just uncommon.

Establishing shots are generally muddy, such as the park at 19:34. Blown out highlights cause a lack of definition on the leaves and other plants. Oddly, others, such as Gibson standing on some rocks at the beach at 21:34, are surprisingly well rendered. Later, at 1:20:56, plant life is horribly processed and mushy. The lack of definition is a disappointment.

Black levels are superb, one of the few consistencies about this encode. The opening shot of a river at night delivers outstanding depth. The minimal crush is easily forgiven. Colors vary in saturation and intensity. There are times where rich blues and deep reds dominate the frame, and others where a pale, cold palette takes over, obviously intentional to sell the flat corporate world. Some scenes made to look like home video look the part, and you can easily spot the noise against the wall at 1:13:22.

This DTS-HD effort has a few caveats, but is generally satisfying. Getting the negatives out of the way, Gibson’s conversation with his daughter in the car at 4:20 is hollow, possibly recorded via ADR. A brief exchange Gibson has with Gbenga Akinnagbe around 15:30 is notably muffled, even hard to hear. Finally, the bass during a brawl inside an apartment is loaded with some muddy bass, making it almost sound compressed.

Thankfully, the rest of this mix is fine. Gunfire is quite heavy in the low-end without being overpowering. The subwoofer delivers a fantastic jolt during a surprise death of a bit-player, enough to cause the viewer to jump. Fantastic surround tracking is evident while Gibson waits to follow someone. Cars exit a parking lot, moving front to back, while splitting the stereo channels wide.

Dialogue sits a bit low in the mix, although not something a small volume adjustment won’t fix. Nice ambient rain sets the mood consistently in the beginning. A few car crashes are satisfactory in terms of their aggressiveness and clarity.

Extras are brief, including deleted/extended scenes that run a bit over five minutes. Nine Focus Points, a fancy marketing term for featurettes apparently, last a bit over a half-hour. Surprisingly, there is a nice piece on the original miniseries in that stack of basic promos, although footage is oddly edited to cut any of the actors from the frame. Generic BD-Live support remains.

Full disclosure: This Blu-ray was provided to us by Warner Brothers. This has not affected the editorial process. For more information on how we handle review material, please visit our about us page to learn more.