Stanley Tucci is unnerving, or at least he can be. As a child murderer in The Lovely Bones he creates one of the most uncomfortable movie watching experiences in recent memory.

Here he sits in an underground room built in a cornfield with Susie Salmon (Saoirse Ronan), a young girl he has lured inside. Like any curious child, she falls for his calm demeanor, and the audience already knows where the scene is going. George Harvey (Tucci) takes a seat across from Susie and everything stops. There is no sound, just these two people in a claustrophobic room, and the audience can do nothing but wait for the inevitable.

Lovely Bones has the audience at this moment, and the family drama between Susie’s parents Abigail (Rachel Weisz) and Jack (Mark Wahlberg) is effective. Their individual means of dealing with their missing daughter are emotional and involving. The investigation into the murder, including an incredibly drawn out, tense scene in which Susie’s sister tries to find evidence in George’s home, are flawlessly handled.

Director Peter Jackson wants The Lovely Bones to be more than a missing child/murder mystery. He wants to explore death, and show part of the after life on screen with what we already know are high-end visual effects.

That all fails… miserably.

Yes, it is unique, and certainly visually striking. The imagery is also innovative, and in a rather haphazard way, all connected. Saoirse Ronan is superb, particularly as she tries to comprehend what has happened to her. She does not understand, or does not want to. Maybe her young mind needs time to accept it all.

Whatever the case, Susie is able to interact with the real world, and the results are entirely unsatisfying. It creates a disconnect between the afterlife and real world. You begin to wonder why all of the children Susie is introduced to post-death have not done the same. With these powers, even in death, George never could have committed a crime spree.

All of this seems to exist to show off, and it certainly does that. Most of the computer generated effects are striking, certainly creating a believable plane of existence where anything is possible. If they never connect with the audience, or worse, fail to make a connection with the tragic story of a murdered child, then what is the point? 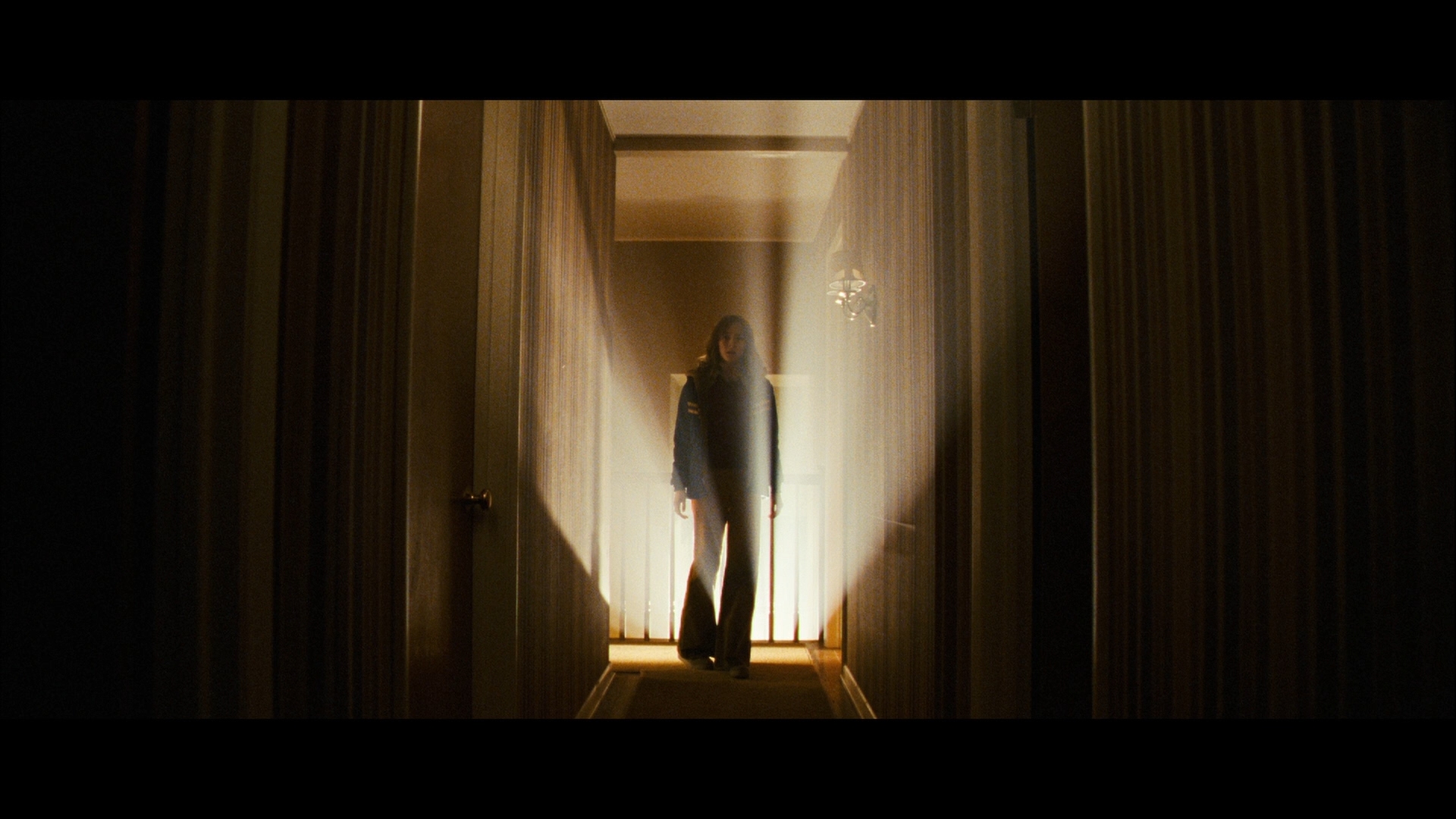 Peter Jackson used a variety of methods to film Lovely Bones. Notably, the Red One for digital shots, and the Arricam LT for film. What was used and where can be difficult to discern. The only notable inconsistencies are video noise, which could be a fault of the encode, digital intermediate, and the certainly digital motion of close-ups to show Tucci’s nervous hands.

As for the noise, there are a number of scenes where it becomes a problem. At 45:20, Susie’s face is riddled with dancing blocks, which could be a result of the digital effects surrounding her, or maybe a thicker grain structure caused by a zoom. At 1:33:40, the walls of the house show significant noise/artifacting. The same effect can be seen in Susie’s bedroom at 2:00:43 against the purple wall (which at this moment become off-color). Another time stamp to take note of is 1:37:57, where again, a sharper, coarse grain structure envelopes Susie’s face. In the next edit, the problem is fixed. Some banding and noise can be seen in the fog at 31:41, which could be caused by a number of factors. The encode itself maintains a steady bitrate, so this is likely a source issue.

With all of the complaints, that might not be doing this transfer justice. For much of the running time, Lovely Bones delivers a truly striking image. The opening scenes, dominated by a bright, heavily saturated group of primaries, are fantastic. A hot contrast can occasionally strip detail from the frame and cause blooming, all intentional to keep Susie’s innocence. Black levels are exceptional, giving the image a consistent depth and dimensionality. Even underground before her murder, the dim lighting does not cause any noticeable issues, plus excellent definition is maintained.

Superb detail in long shots, especially those with plants and trees, are stand outs. Right from the start, an establishing shot of a farm at 4:05 shows fully resolved leaves, grass on the ground, and the wear on the barn towards the top of the frame. High fidelity facial detail, while not present in every frame or even consistent, is typically of reference quality when noted. Few close-ups disappoint. The stylized afterlife scenes benefit greatly as well, especially as Susie sits near a moss-covered tree, with countless leaves covering the ground. That is a prime example of how well the format can preserve complex scenery.

A DTS-HD effort from Dreamworks can be especially aggressive. Deep, pounding drums during tense scenes provide a heavy low-end jolt that is quite satisfying. A spectacular effects scene with giant model ships crashing into each other is a bit flat, but still provides enough bass to deliver a rumble or two.

Directionality is excellent, capturing a number of small audio cues in the proper channels. Susie is forced to drive a car early in the film, losing a hubcap which then is heard rolling from the right front to the right rear in a clear transition.

Most of Susie’s afterlife scenes contain some surround elements which are clear and distinct. Whipping winds, rustling leaves, and thunder are wonderfully crisp. A scene as Mark Whalberg runs through a cornfield is notable, intermixed with Susie’s vision. As corn is pushed aside, it moves front to back. From Susie’s view, the thunderstorm rages with wonderful fidelity. Mixed with the score and dialogue, the scene is one of the most effective in terms of audio on the disc.

Extras look short in print, but are anything but. Peter Jackson provides a brief introduction before you move into Filming the Lovely Bones. Like Jackson’s other productions, he filmed everything. All of this footage is crammed into the nearly three-hour documentary, split into three parts, and then into week-by-week breakdowns. Exhaustive does not even begin to cover it.

This is the only extra, although it hard to know what else someone would want. Do you even need a commentary track at this point? Filming is wonderfully and honestly produced, and literally covers all aspects of the production. It even has its own disc, and is presented in HD (1080i). If you have the time, just sit back and enjoy.