Unlike its predecessor, generally a fun, light-hearted film, Toy Story 2 pushes for a bit of emotion. Woody (Tom Hanks) has a nightmare about Andy (John Morris) dumping him into a trashcan of broken toys. The sequence, with harsh lighting, dramatic music, and slow motion, is surprisingly terrifying, even a little off-putting.

Of course, the film recovers, containing a scene where newcomer Jesse (Joan Cusak) reminisces about being played with before being found by a toy collector. How any film about talking toys could possibly elicit a strong sense of happiness and sadness is baffling. Leave it to Pixar. The sequence is beautiful, letting adult audiences reminisce about their favorite toys, and easily resonating with a younger set who still cling to their favorite piece.

Beyond those diversions, Toy Story 2 is everything a sequel should be, even a baseline for how a follow-up should be done. Characters return with their same personalities, the new ones fit logically into the story (and not just for marketing purposes), it is loaded with properly timed/placed jokes from the first, it looks better, and the adventure is larger in scale.

More importantly, this sequel is just as entertaining. The little gags add up, particularly the Star Wars references as a new Buzz Lightyear battles nemesis Emperor Zurg on an elevator. Wonderfully crafted sequences are numerous, especially the street cone crossing that causes a massive traffic accident.

Toy Story 2 is no less creative than its predecessor either. Many of the dropped concepts for the original are apparently crammed into this sequel with no ill effects. You can still see that same level of ingenuity come alive on screen. The entire product line for Woody’s Round-up, based off the fictional TV show Woody was featured on, is just spectacular. The “snake in a boot” is especially classic. These look like logical, real products from the era, perfectly designed to fit within the world of Toy Story.

Toy Story 2 was originally meant to go direct-to-video. Both Disney and Pixar realized the error of their ways, giving the film additional time and going for an all-out theatrical release. While the film does contain some elements of the sadly familiar Disney video sequel (the opening re-introduction of the characters is done with little subtlety), that is reaching for something to complain about. This is that rare sequel with as much energy, vibrancy, and entertainment value as the original. 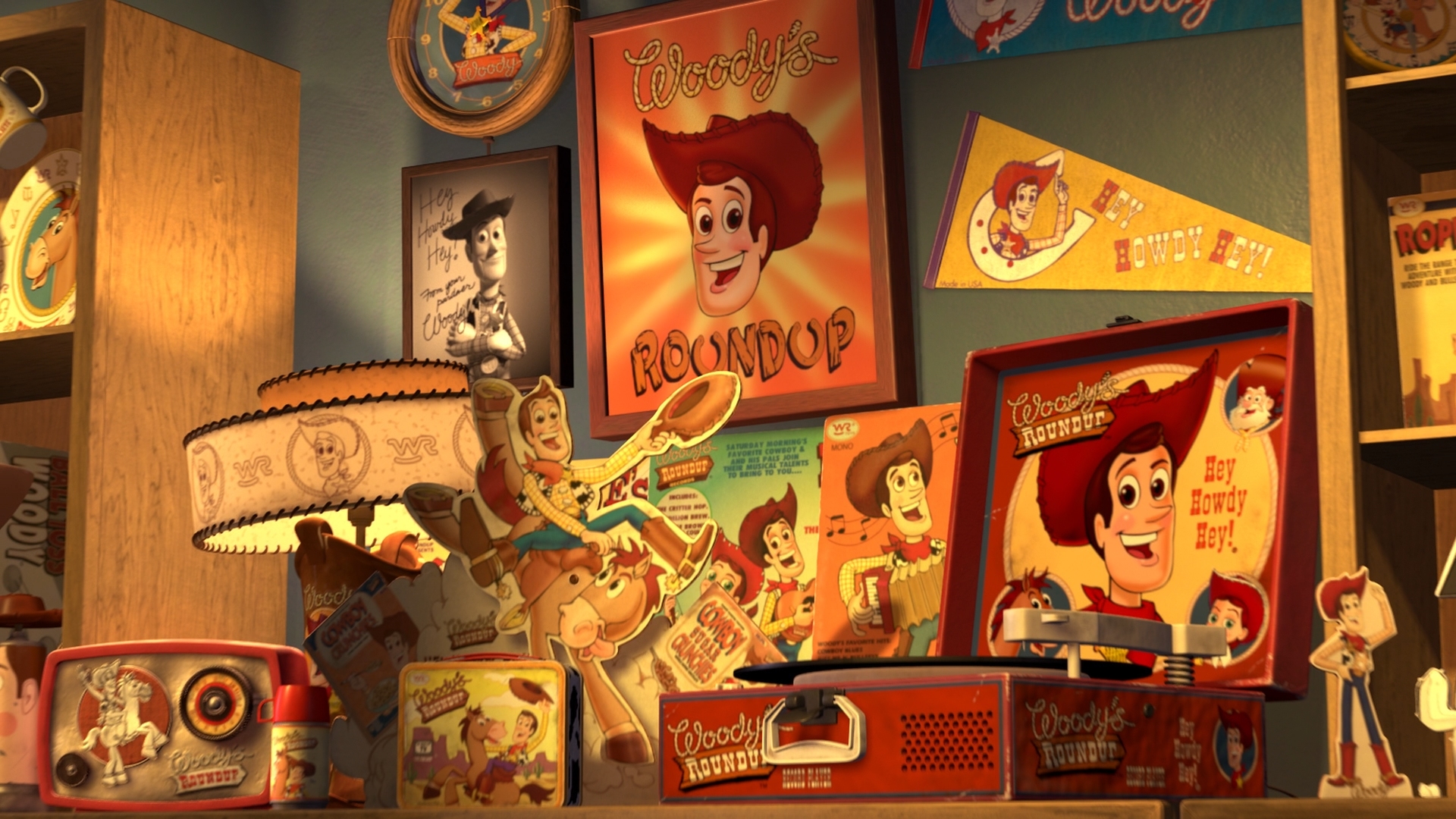 There was a four-year gap between films, and if this reference quality AVC encode proves anything, it is how far animation had advanced in that short span of time. Immediately apparent is the stronger, focused lighting. While the original produced tremendous depth, it almost pales compared to level of dimension showcased here. As the second Buzz is hanging in the elevator shaft and the camera shifts to the toys hanging from his utility belt, you begin to wonder why 3-D TVs are even needed. The image, pardon the cliché, leaps off the screen.

Colors are brilliantly realized, from the vibrant greens of the digital plant life to the reds and pinks of Barbie’s introduction. The opening scene taking place on an alien planet is drenched in incredibly rich blues, and the same goes for the nighttime search for Woody led by Buzz. The flashback of Jesse contains intentional blooming that only makes the beauty of the fall-ish color palette more beautiful to admire.

Detail is increased, particularly apparent in longer shots. Back to the opening, Buzz becomes surrounded by hundreds of alien robots, all of them clearly visible, defined, and detailed deep into the frame. Grass is always defined, producing individual leaves. Furniture, cloth, and wood showcase tremendous texture. Look at the cotton swab used to clean Woody’s eyes during the restoration. Every strand seems clearly visible, and sharply so.

If any flaws are noted, it is likely of the source. As with the first film, aliasing around the round space suit of Buzz returns. At 1:12:28, the car grill flickers wildly. The same problem exists during most of the baggage chase near the finale on the plane. These are marginal problems in what is a true stunner for Blu-ray.

While huge action movies filled with blood and gore are fun for demonstrations, what if someone brings their kid along? You pop in the opening scene to Toy Story 2. Buzz Lightyear’s “video game” is a technical audio marvel. His descent through the atmosphere is aided by a fantastic level of bass that extends as deep as possible. Even the logo panning into the frame produces a satisfying rumble.

Objects whiz by the viewer, especially during his flight through a canyon. When the aliens fire their lasers, shots come from all sides. Directionality is nothing short of perfection. Pans across the front soundstage are flawless, and any front to back movement is perfectly captured.

And that’s just the first five minutes or so. Clarity is spectacular, and all elements are kept prioritized throughout. During the final frames, Wheezy begins singing his version of “You’ve Got a Friend in Me,” which is full of energy. The surround bleed is exquisite. The echo inside the vents as the toys maneuver through Al’s office is not only free of any distortion it is immersive as well. The trek across the street via traffic cones has a massive concrete pipe barreling towards Mr. Potato Head, beginning with a light bass level before becoming completely engaged with a thunderous rumble.

Special features seem familiar to the first film, because they mostly exist as extensions or continuations, such as the Toy Story 3 preview which now focuses on the characters. The commentary track is slimmed down to just co-directors John Lasseter and Ash Brannon, editor Lee Unkrich, and writer Andrew Stanton.

Buzz Lightyear is back to provide a look at the International Space Station for the younger set. Paths to Pixar focuses on additional staff members telling their stories of how they wound up at the studio. Three more stories come from deep inside Pixar in Studio Stories. Pixar’s Zoetrope is a far too short two-minute look at Pixar’s own animation Zoetrope they made for Toy Story 2.

Celebrating our Friend Joe Ranft is a retrospective on the story designer (and voice of Wheezy) who sadly passed away after Cars was finished. The rest of the extras are pulled from the Ultimate Toy Box DVD edition. These include three making-of featurettes, a selection of outtakes, deleted scenes, a section on design, another on production, followed by music/sound and publicity. Loads of trailers and BD-Live access remain.