The canal chase in Terminator 2 is arguably the best action sequence ever conceived, and not just because of Arnold Schwarzenegger blasting away at a semi truck with a shotgun. That is of course awesome in all regards, but it is the first action scene in the film with a purpose.

The audience, still unsure whether or not Arnold’s T-800 cyborg is friendly, grabs John Connor as the spectacularly evil T-1000 cyborg model (Robert Patrick) tries to run them over. It is the transition point for the film, as the T-800 was previously seen taking out people in a bar, stealing their clothes, boots and a motorcycle. This is not a trustworthy machine, at least until he saves Connor (Edward Furlong).

As for the T-1000, here is where its abilities are established. This new completely ridiculous yet visually spectacular liquid metal machine can take multiple shotgun blasts, get slammed against walls with no ill effects, and survive a massive explosion when a truck fails to make a clearance.

It is not a scene that exists just to show off (then) spectacular morphing CG effects; it exists to build the story, suspend disbelief, and completely entertain. The following action scene in which John’s mother Sarah (Linda Hamilton) escapes from a mental hospital is just as crucial. Here Sarah is capable of hanging out of a window, shooting at the T-1000 as it tries to chase her down. It shows her protectiveness of John, her toughness, and her ability to put up a fight regardless of the circumstances.

For all of its amazingly scaled action, including the final 30+ minutes of the movie, Terminator 2 succeeds at subtlety. You don’t expect that from an Arnold Schwarzenegger film, yet it provides. The few oddly happy scenes with John and the T-800 are wonderful. John is seeking a father figure, turning the machine into something he can trust and bond with. In a turn that in the wrong hands could have taken a disastrous detour, the ending of T2 is emotional, the death-dealing machine forced to sacrifice itself to stop a rogue computer network from taking over the world.

Many will call T2 a thinking action film, and in a sense, that almost works. However, thinking about it only reveals a stack of plot holes, including why Skynet would not just send a few hundred Terminators back in time to ensure the job is done, or just go back to the 1800’s to wipe out a great, great grandparent of John. Either scenario will wipe the human resistance off the face of the planet. Like many other greats before it, T2 is so immensely engrossing, you never question it while you watch, only after you have soaked it all up. 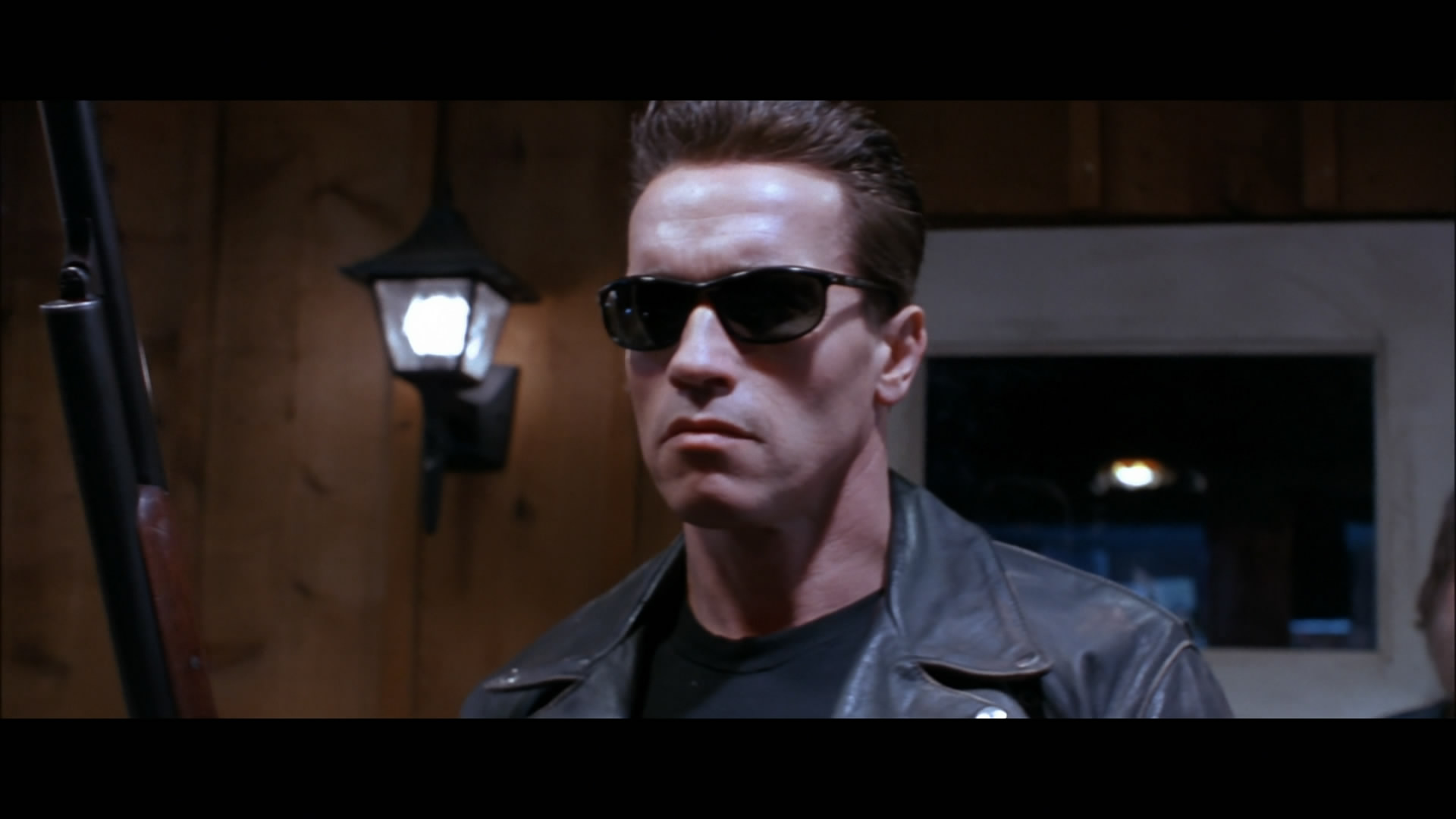 The Skynet edition of Terminator 2 makes for a second round of the film on Blu-ray, and oddly, it looks worse. This transfer led to a bit of controversy, debates focusing on whether or not the disc carried a heavily DNR’ed transfer, or if the low bitrate encode was at fault. DoBlu’s verdict? DNR.

Looking at some of the other discs on the market with low bitrate VC-1 encodes, namely Warner’s recent crop of new releases, they appear digital and noisy, and carry problems with artificial sharpening. The grain structure is still there. On this Skynet disc, over 90% of the disc carries no grain structure at all. It appears smooth and digital. High fidelity detail is lackluster aside from certain close-ups (the conversation inside the Dyson home at the table looks mostly fine), and the digital sheen is apparent from the opening frames. Flesh tones appear pinkish or pale.

Edge enhancement is tough battle as well. The first noted appearance is over Robert Partrick’s right shoulder at 16:32. Backdrops show what appears to be grain, but in actuality is a mess of compression artifacts. The smoke during the first shot in the future (towards the right side of the screen) is also loaded with blocking. Noise is noticeable inside the CyberDyne facility at 21:40 towards the ceiling.

Black levels generally hold stable, one of the few positives. These do drop during the special effects scenes, taking on a glowing hue that is unavoidable considering the dated source. Some print damage remains, because apparently wiping all high fidelity detail from the frame is okay, but using that same technology to patch up a few specks is not. The encode handles the heavy blue tint of the film well, and the hotter tones of the factory finale equally despite a pervasive softness throughout.

Audio in this DTS-HD 6.1 uncompressed mix only suffers from a few faults. This track loves the front stereo channels, splitting them wide and capturing every possible audio cue in them. Cars passing by, engines, gunfire, and explosions are all forcefully inserted into the fronts. Oddly, that aggressiveness does not carry over to the surrounds. That extra rear channel is barely utilized, or lost due to a lack of directionality.

Some of the shootouts are not as expected, and the musical score sort of falls underneath the action. There are certainly moments where the rears are superbly utilized. The explosion of CyberDyne has glass shattering, with a fantastic level of crispness and fidelity, into the surrounds. The mental hospital escape is aided by an immersive echo. Unfortunately, the metal factory lacks ambiance, or at least anything aggressive enough to be notable.

Still, it just seems to be missing something. Fidelity is a minor problem, such as the truck smashing through cars before entering the canal. Crunching metal lacks a clean high end, yet the mini-gun assault outside CyberDyne is spectacular. Arnold’s shotgun, especially in the mall, carries a weighty low-end punch that seems to overpower everything else. Explosions are especially powerful, the crash of the Skynet flying vehicle near the start becoming a showcase piece for a subwoofer.

High on technology but low on user friendliness, the Skynet Edition opens (on BD-Live enabled players) with Skynet itself finding your current location, internet provider, and zip code, noting you are a prime target. You can select either the extended edition or the theatrical cut before playing the film.

Once into the menus, you will find two commentaries. One is from 1993 with 26 members of cast and crew, a crowded effort if there ever was one. Another comes from 2003, featuring James Cameron and writer William Wisher.

The majority of the other features are pop-up related, meaning you need to watch the film roughly eight times to see it all, 10 if you count the commentaries. You can view the film with storyboards, the script, a trivia game, basic trivia, making of featurettes, shot breakdowns, slideshows, and mini-games. Only two deleted scenes are available outside of the film itself, and they offer an additional commentary as well. This disc is D-Box enabled.

BD-Live offers access to a half hour making-of which must be downloaded, plus a bunch of Japanese trailers and chess game. Why is this stuff not on the disc, or even on an extra disc, for the sake of end user convenience?