Despite not even trying, Spaceballs offers some impressive sights. The opening shot, a massive brute of a ship passing by that lasts well over a minute might be a gag, but in reality is a fine piece of workmanship. Loads of random gadgets, blinking lights, connecting pieces, and a bumper sticker cannot be easily constructed.

Oddly, that same vessel, named the Spaceball 1, seems awfully small in future appearances. Then again, that inconsistency sort of fits with the screwball gags and zany humor.

Spaceballs does not live up Brooks’ other spoofs, including the vastly superior Blazing Saddles, but Spaceballs does have an energy. Bill Pullman’s hilarious deadpan delivery of dialogue his own character Lone Starr realizes is baffling makes comedy gold.

The film chooses not to skewer the Star Wars films alone, but their industry impact. Brooks, playing the Yoda-inspired Yogurt, begins showcasing the various pointless items for sale, including a Transformers coloring book with the Spaceballs logo clearly slapped over the title.

For all of its goofy humor, some of it hit or miss, nothing beats Rick Moranis as intergalactic villain Dark Helmet discussing Spaceballs: The Videocassette with Colonel Sandurz (George Wyner). They use the video to scan ahead to find where Lone Starr has taken Princess Vespa (Daphne Zuniga), while Helmet and Sandurz discuss how they already have a tape of the full movie, despite being finished yet.

That is truly amusing, but more impressive, their conversation actually makes sense. While they debate about the movie in the background, the back-and-forth conversation about their current time comes out logically, not as random babbling. Only Mel Brooks could pull that off. 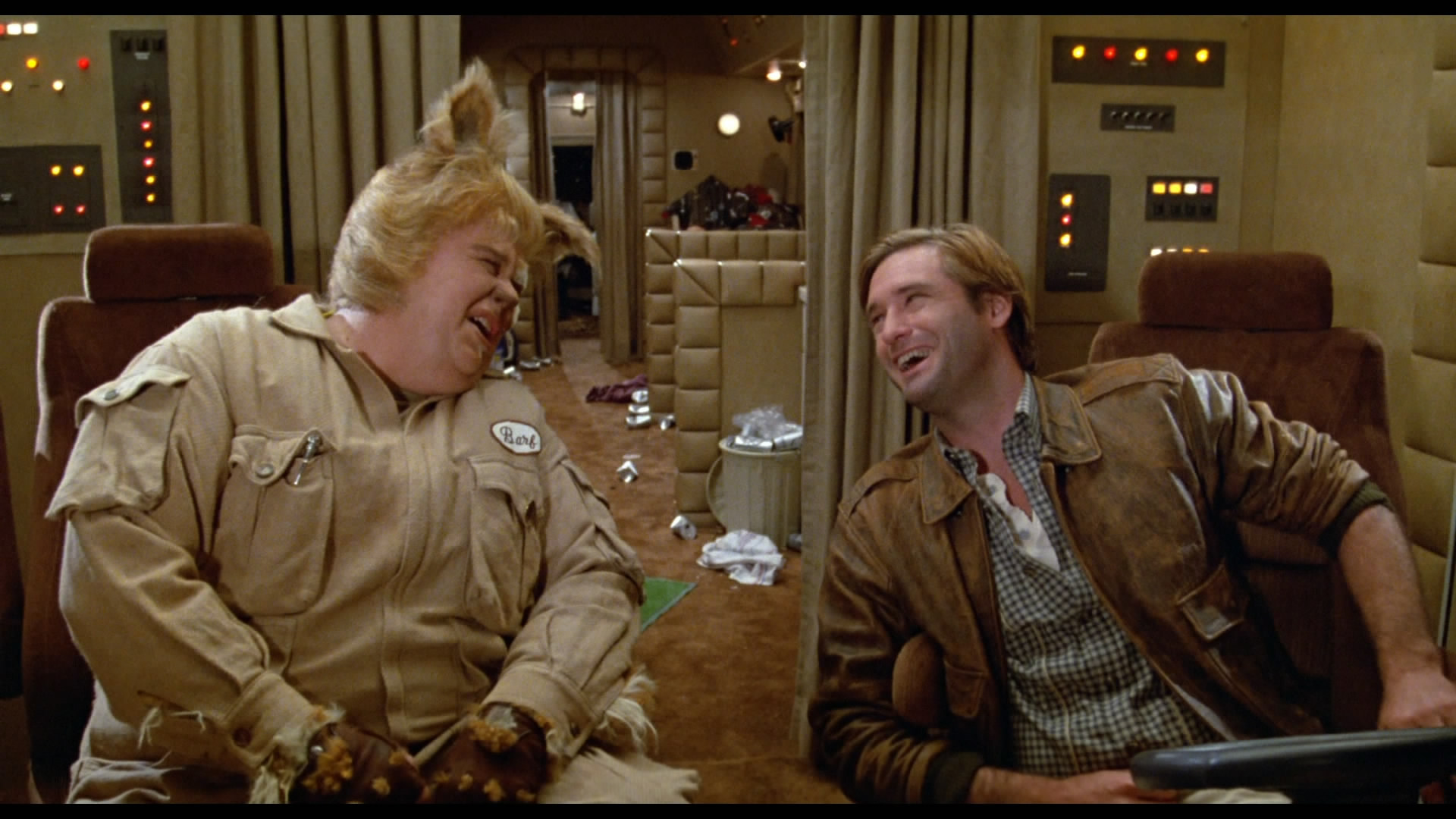 Details are limited, although no offensive digital manipulation seems to have been performed. Definition, while generally poor, does deliver some cleanly delineated hair. The sparkles of Dot Matrix’s shiny gold hair have hardly been this clean. Likewise, Barf’s eyepiece can clearly be made out. In the past, it appeared like a simple make-up application, but is in fact an actual appliance.

Pizza the Hut is truly disgusting, slime and pepperoni clearly oozing out from his head. This transfer makes it easy to appreciate the work that went into the suit. Facial textures for human characters remain non-existent. Colors are natural, and flesh tones are accurate. Print damage is sporadic, but notable.

Right from the opening credits, Spaceballs musical score sounds drowned out, stuck in the mid-range. It lacks fullness, coming through subdued and constrained. Dialogue is fine, consistently audible and clean. Likewise, audio effects are fine.

This DTS-HD effort makes the most of the stereo channels, splitting them cleanly for music and tracking shots of ships passing through. Laser blasts move side-to-side without any noticeable distortion. The surrounds, while not terribly active, do provide a few moments of note. The ‘80s theme as Barf is first introduced is precisely worked into the mix as he moves about the Winnebago.

Some limited bass, particularly during that extended opening shot, is quite smooth and deep. The engines nail the low end with a satisfying, powerful rumble. Explosions that come later, well, not so much.

Features are pulled from the Special Edition DVD, beginning with a solo commentary from Mel Brooks. This is followed by a fine making-of appropriately titled Spaceballs: The Documentary that runs for a half-hour. In Conversation with Mel Brooks and Thomas Meehan is an enjoyable meeting between these two men as they discuss the influences and origins of the film (Meehan given a writing credit).

John Candy: Comic Spirit is a wonderful look at Candy’s career and life. It’s a shame it doesn’t last longer than 10-minutes. An option to watch the movie in “Ludicrous Speed” means you’ll get through the whole thing in 29 seconds, while a series of six outtakes are annoyingly separated with no play all option. Trailers, stills, and storyboard comparisons remain.