Near the end of The Phantom, Kabai Sengh (Cary-Hiroyuki Tagawa) tells the Phantom (Billy Zane), “I know your secrets!” That’s great Kabai. Think you could share them with the audience? We’ve been waiting the entire movie to figure them out.

That is arguably the worst thing The Phantom could have done, introducing an unknown character to the majority of modern audiences and giving them no basis for his actions. Billed as a super hero, and of course wearing a ridiculous purple outfit and mask to sell the effect, nothing about this character is known until the end of the film. For most of the runtime, the audience believes he is immortal, completely wiping away any tension in the goofy, lively action scenes.

Undoubtedly, The Phantom came out at the wrong time, just shy of the current super hero boom, and during a downfall of the genre. While Tim Burton’s Batman may have briefly revitalized the concept, it just as quickly died with the sequels, and The Phantom’s release was not even a decade removed from Superman IV.

That made this quirky appreciation for the serials of the ‘30s and ‘40s hard to grasp for a mid-90s movie audience, but beyond the embarrassingly bad visual effects (who okayed the exploding island?), Phantom is Fun (and yes, that is a capital “F”).

Billy Zane plays Phantom with wonderful timing and wit, a role originally planned for Bruce Campbell who also could have stepped into the purple outfit with no ill-effect. On the other side, you are watching Treat Williams having a blast as the villain, Xander Dax. He is the perfect blending of the deranged, power-hungry madman and likeable jerk, spearing one of his business partners, but becoming more concerned with the damage to his expensive door.

While downtime is a bore, Phantom’s wildly fun brawls, rope swinging, plane jumping, and car diving are worth the wait, despite some of the most obvious stunt doubles in movie history (the plane jump and proceeding horse chase particularly). David Newman’s breezy score completely sells the tone, matching the intended effect those aged serials provided.

It is hard to blame anyone for not liking a film filled with cheap sets, ridiculous costumes, and nonsensical fantasy plotline. Watching The Phantom and Dax fight with their lasers at the end of the film is hilarious, but for the right reasons. If this is a bad movie, it is the bad movie done right, and the limited audience this is geared for will understand that. 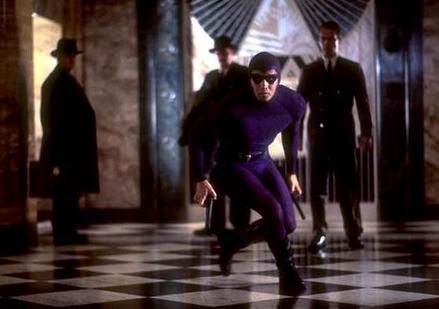 Lionsgate handles the Blu-ray effort, apparently taking over from Paramount who previously owned the rights. The source here is a concern, with a barrage of white specks constantly hitting the frame. These would not be such a problem if the digital manipulation performed had taken care of them.

Obvious DNR has applied, adversely affecting mid-range and long shots the worst. In close, marginal levels of detail are evident, oddly superb during the final frames as Phantom says his goodbyes to Diana on the beach. The rest of the film is muddy in appearance, ruining what should be beautiful jungle photography. An early scene is on a bridge, the camera sits away from the action to preserve the scope of it all, and the mountains and trees lack any real distinction. Flickering on car grills is an annoyance.

Flesh tones are usually pink, although not offensively so. What grain remains is usually digital in nature, hardly accurate to film. This is likely not the fault of the AVC encode itself. Some thick edge enhancement is dominant early around high contrast edges, although it subdues later, mostly because the film starts getting darker. One anomaly occurs at 27:53, where a barely visible blue line appears vertically on the screen just left of center.

Black crush is severe at times. Black suits become solid pieces, heads merge with backgrounds, and cave scenes are especially difficult to make out. While they may deliver in terms of depth and they are consistent, the effect is hardly worth it. Colors, while bright, can be over saturated, especially the greens of the jungle. In other parts of the film, such as the blues used for the airport signage, they look great.

As always, Lionsgate delivers a DTS-HD 7.1 mix that is aggressive and lively. This is an audio track that excels at everything, despite the lower fidelity compared to what audiophiles are used to with modern films. Ambiance in the jungle is excellent, with constant, unobtrusive animal calls in the surrounds. Inside caves, the echo effect is complete and satisfying.

When the action kicks up, so does the effectiveness. Vehicle tracking is excellent, from airplanes to cars. The stereo channels are utilized steadily. Gunfire always lights up the soundfield, beautifully enveloping the viewer in the action. Bass is delivered forcefully, whether it is the punchy gunshots of the Central Park chase or the cannon blast in the pirate cave. Explosions are wonderful, shaking the sub and the shockwave zipping around to the rears.

David Newman’s score bleeds actively into the surrounds, perfectly utilized when Treat Wiliam’s pieces together two parts of the skull treasure. The museum begins exploding stained glass, winds whip around, the score picks up energy, and dialogue is perfectly understood. It is a wonderful moment, and some of the best audio this disc offers.

Being that this was a box office flop, Lionsgate ditches any lavish treatment, using the disc as a promotional device with trailers only.