Hidden beneath a thick layer of 1980’s cinematic cheese in Running Man lies a timely parable about government control, media manipulation, and oppressed people. The eager crowd watching Ben Richards (Arnold Schwarzenegger) is somber when his violent opponents die, and jeer when he fights back all because the government controlled media told them Ben killed innocent people.

He didn’t of course, and in a priceless sequence of Schwarzenegger cardboard acting, actually tried to save a crowd of 1,500 innocent lives struggling for food in a riot. Wrongly imprisoned for the act, Ben escapes only to be caught and involuntarily entered onto the game show Running Man.

All context goes right out of the window as Ben and his partners defend themselves against an overweight, hockey-playing samurai. The opponents exist purely to allow Schwarzenegger to look directly into the camera after killing them and spout off one-liners right on par with Commando.

Everything that made Schwarzenegger’s ‘80s action movies the cult classics they are is here. Beyond the one-liners, there is the inevitable scene where countless bad guys run at him with guns, every shot fired misses, and Arnie pops off one bullet to take them out. Writer Steven E. de Souza fits in the must-have, “I’ll be back” before Arnold is shot down a tube into the game. Jesse Ventura makes an appearance as a fitness guru, one of four times he would appear in a film with Schwarzenegger, twice in 1987 alone (the other being Predator).

Even with the muscle-bound, steroid popping action stars of the ‘80s, the show stealer is Richard Dawson. While not a stretch, Dawson having helmed Family Feud for many years, his light innocence is priceless in this setting. He energizes the crowd to see people murdered, hands out countless prizes to winners who have sent Strikers to their death, and delivers a monologue about one of the shows stars having his head nearly taken off by barbed wire.

While it may dilute any intent in terms of political leaning, Running Man was undoubtedly influential, something it deserves additional credit for. Modern films such as Gamer rely on this Arnie classic for their backdrop, and even video games such as Smash TV blatantly rip-off this concept. Running Man has that lasting impact, and despite now being easily seen for its unbelievable level of corny satire, there is a point to a man wearing Christmas lights on his chest being electrocuted… somewhere. 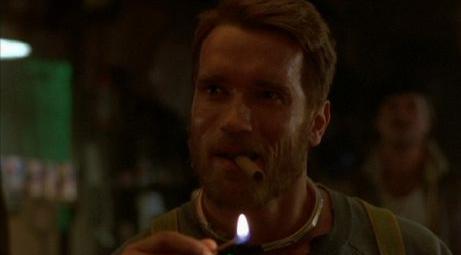 Lionsgate delivers Running Man to Blu-ray in an AVC encode, one with few positives in terms of its ability to show off. The film is inherently soft, with few notable crisp details, and typically flat images. Facial detail is rarely evident, and hardly defined when it is.

Colors are natural, with accurate flesh tones. Certain items, such as the yellow jumpsuit worn by Maria Conchita Alonso is particularly vibrant. Black levels are quite deep, although this does sporadically lead to some rather significant crush. The grain structure has been left alone, and is generally limited. Explosions are wonderfully rich and bright as they rip through the frame. Nighttime scenes, which comprise much of the film, are a surprise, maintaining the same level of quality as the rest. The picture never becomes muddy or lacking distinction.

There are no noticeable anomalies created by the encode itself, whether that is artifacting, edge enhancement, or DNR. The source material is either surprisingly well kept or flawlessly restored, as even the double-printed special effects are without a speck or dirt.

A DTS-HD 7.1 mix is the audio format of choice, a loud, boisterous mix. This track loves heavy ambiance, especially early on as helicopters pass overhead, or in the factory where clanging tools and sparks envelop the viewer. Although this is 7.1, the additional rears are rarely distinct, and tend to sound like a single channel as opposed to discrete sources.

Like the movie itself, the audio is wonderfully overdone, especially apparent as Fireball (Jim Brown) is introduced. He shoots his flamethrower at the screen without going above or behind the viewer, but the roar of the fire is clearly tracked in the surrounds. The insertion of the players into the game itself takes place in a tunnel, where the metal seating device banks off the circular walls creating a loud echo. Roaring crowds are always full, and tracked in the fronts side to side as well as in the rears.

Fidelity is somewhat weak, straining in terms of dialogue and bass. Explosions, although they produce a rather significant thump, sound muddled and unclean. Music on the other hand, including the show’s intro with the dance number, is fine. Purists will probably gasp at how ludicrously overdone this all is, but for a movie like Running Man, it oddly fits with the visuals.

All bonus features on the Special Edition DVD have been carried over to the Blu-ray, with the exception of the Striker profiles. Two commentaries are available, one with director Paul Glasser and producer Tim Zinnemann; the other features executive producer Rob Cohen going solo.

Two featurettes focus on the messages Running Man was trying to give us, not necessarily on the making of the film itself. Lockdown on Main Street is a 25-minute look at government monitoring and the lack of privacy in the days of the Patriot Act. Game Theory looks at reality TV shows, and the extremes they go to for entertainment. Some trailers are left.