According to Event Horizon, all space machines of the future spark, even more than missed bullets in John Woo movies. Every explosion in this 1997 sci-fi/horror mash-up loads the frame with thousands of bright sparks, although why is never very clear.

They are at their worst during the finale, a generic “run from the monster” finish that ruins much of the psychological tension the script was building. Laurence Fishburne is tasked with destroying the gravity drive, a device that could send the ship named Event Horizon through the very fabric of space and time. Of course, he has to run from a burning Sam Neil to do it, although that is getting ahead of ourselves.

The Event Horizon disappeared seven years ago according to the opening text, the beginnings of a series of explanations that fill the first act. Sam Neil’s Dr. William Weir was the creator of the gravity drive, now sent on the search & rescue mission to find out what happened, and his character exists purely to talk to the audience. Each necessary room of the ship is given an explanation, one that must relate to actions yet to take place in order to make the dialogue relevant.

Event Horizon is effective when everyone settles. The ship, taken over by a mysterious, unexplained force, plays mind games on the crew. Peters (Kathleen Quinlan) has especially vivid delusions that her son is on board, and infected with a disease.

These are effective moments. Peters hears noises, and turns around to see a hand pass in front of a light inside a medical tent. Her slow approach builds genuine tension, and the reveal is a pay-off that was worth waiting for. Event Horizon uses light well, if not much else.

That’s why the third act is such a disappointment, falling into the usual traps, from splitting the crew to bombs running on timers. Frantic, familiar action is far less engaging that the psychological horror Event Horizon provides. Seeing Laurence Fishburne blast a possessed Sam Neil over the head with a plastic tube, and apparently doing significant damage in the process, is unintentionally comical. 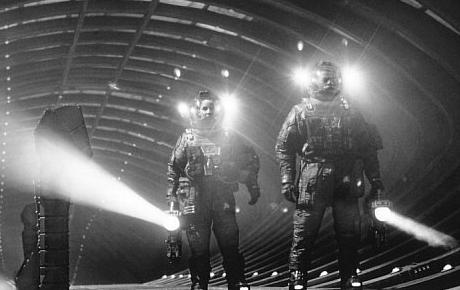 Paramount issues Event Horizon using a familiar master, one used for the prior DVD release. This means extensive edge enhancement is liberally applied, and at times staggeringly bad. Watch as Sam Niel stands up to shave early in the film. His entire body has a halo around it.

There is also a notable vertical stretch applied for no apparent reason. One of the most glaring shots occurs at 82-minute mark, as bodies and heads of the actors are completely out of proportion. This is also apparent throughout the film, although not as rough as the edge enhancement.

Colors are well saturated, and black levels are mostly firm (with some crush). The print holds numerous specks, although damage is typically limited in any given frame. Grating and the helmets used when moving through space show significant flickering.

Event Horizon may not offer the cleanest, crispest bass, but it nonetheless rattles with incredible power. The first shot of the Event Horizon loads the subwoofer with brutal punch, certainly a wake-up call if you’re not ready. Thunder and explosions later in the film provide the same powerful jolt, one that is slightly higher than expected should the volume be at an acceptable level for the low dialogue.

Surrounds are usually engaged. As the crew first lands on the Horizon, gravity is off. Objects freely float around the ship, and move through the soundfield with accurate motion. Fire envelopes the rescue ship early, and the roar of the flames is nicely captured, along with the ensuing alarm. When the pyrotechnics begin late, exploding debris swirls through the soundfield, and remains free of distortion.

Extras are pulled from the DVD, beginning with a director Paul W.S. Anderson and producer Jeremy Bolt commentary. However, even better is the 100-minute five-part documentary properly titled, The Making of Event Horizon. This is a fantastic, if occasionally dry piece, on the making of the film and its development.

The Point of No Return is a collection of footage from the set (eight minutes), with the audio coming in the form of a commentary from Anderson. Three deleted/extended scenes also feature an Anderson commentary if you choose. The Unseen Event Horizon has Anderson discussing a deleted opening. Trailers are left.