It is hard not to take one of William Foster’s (Michael Douglas) final lines in Falling Down seriously. Looking a retiring detective right in the face, he inquisitively states, “I’m the bad guy?”

That leaves the audience questioning the same thing. Foster simply wants to get home for his child’s birthday party. After getting stuck in traffic with yuppies honking their horns for people to move out their way, he enters gang territory, where two members threaten to assault him. After that, he walks into a fast food restaurant, requests breakfast, but is told he is three minutes too late. Foster tries to buy boots in a military shop, but is subjected to a racist, homophobic rant on the part of the owner.

His reactions, no matter how severe they are, are the results of society. While we might have the control not to accidentally open fire on the fast food employees, we have all been in a situation where it seemed like an appropriate solution. Foster simply lacks that control. Foster isn’t necessarily falling down, he is broken down, losing his job, his kid, and his entire life. Society is a burden, with a distinct class separation that Falling Down presents beautifully as Foster walks through the city into increasingly richer neighborhoods.

Falling Down is either hilarious, dark satire or a serious attempt to toss everything that writer Ebbe Roe Smith found wrong with society in 1993 (although not much has changed) into a single film. Ironically, Smith would also pen the movie remake of the TV series Car 54, Where are You?, which a year later probably caused many to consider a stand-off in the theater when their money was not refunded.

This is a wonderfully rich and intelligent movie, with well-crafted characters and meaningful diatribes. Schumacher directs beautifully, and chooses an incredibly hot color scheme that accentuates the tension on this balmy day. Most importantly, Falling Down makes you choose sides, picking and choosing Foster’s actions to make a logical determination about what is right, even if nothing he does could be considered “right.” 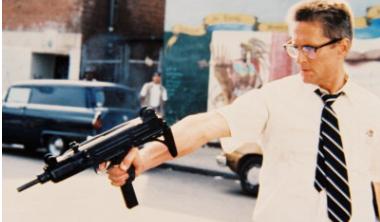 Warner’s VC-1 hi-def debut for the film captures the dim, orange palette well, although the level of eye candy is limited. Undoubtedly, many of the problems being with the low bitrate encode the studio is known for, failing to resolve the finest details and leading to artifacts not limited to the light (but noticeable) ringing that dominates high contrast edges.

Close-ups are generally strong, with adequate facial definition and detail. Everyone in Falling Down sweats to some degree due to the heat, and each bead on a person’s head can be visible at times. Long shots break down, especially notable in the grassy fields Foster walks through around 21:40. The tall weeds are not only lacking definition, but show significant artifacting.

Black levels are inadequate, leaving the film with a drab, washed out look. Very little depth is established, likely a result of the original photography, although that can’t be confirmed. There is a definite lack of sharpness, giving the transfer a fuzzy appearance at times, that is a distraction. A re-encode is in order.

Warner presents the film in a rare TrueHD stereo mix, one that shows its age yet remains stable. The high end is muffled, as evidenced by an explosion late after Foster fires a bazooka. It lacks any real clarity.

Everything is mixed well, remaining stable when the soundtrack, dialogue, and general ambiance work together. Each remains distinct. Some fine separation between the available channels is impressive, keeping every passing car nicely tracked across the limited front sound field. A fly buzzing around in the opening scene is fun as well. Dialogue offers adequate fidelity.

A commentary includes director Joel Schumacher and star Michael Douglas, while the latter takes on a basic 10-minute making-of featurette solo titled Deconstructing D-Fens. The final extra is a trailer.

Also note that Falling Down comes in one of those annoying Blu-ray “Books,” which houses the disc inside a hardcover, nicely written little production book, but is too tall for the typical Blu-ray shelf.