Maybe South Park’s satire of the future of media was not accurate after all. Saddam Hussein was not killed by a pack of wild boars as reported by the news in the movie, and Conan O’Brien did not take a bribe to turn in two Canadian entertainers live on his show.

Then again, groups such as the Parents Television Council are still around, telling people what they can and cannot watch, all for the sake of “the children.” Maybe this decade old little redneck, podunk, jerkwater, greenhorn, one-horse, mudhole, whistle-stop, hobnail, truck-driving, old-fashioned, inbred, unkempt, white trash mountain town does have something valuable to tell us after all.

Bigger, Longer & Uncut may be the start of every Canadian joke ever written, but at least it makes a point in doing it. Attitudes over coarse language in media do not seem to have changed, and South Park shows the absurdity of this wasteful, pointless debate.

After Kenny is killed, parents of Stan, Kyle, and Cartman break into the hospital room completely uninterested that one of their friends has just died. Instead, the parents make a rant about seeing the Terrance & Phillip movie, a “foreign film from Canada” filled with “naughty language.”

Of course, the debate over media content has not yet reached the point where a bloody war has ensued between America and Canada, yet the sad thing is it actually seems plausible for people to be this stupid over a pointless argument. Helpless parents install a V-chip into their children’s brains to prevent them from cursing, instead of doing anything remotely responsible. Oscar nominated (really) song “Blame Canada” is a perfect representation of the prevailing attitude of media and parents to place blame, instead of looking at themselves.

It is important to note that South Park is not completely in agreement with one side, setting a scene where a USO show has Terrance & Phillip put to death in front of thousands of cheering soldiers, another case on the opposite end of the spectrum when entertainment goes too far.

So yes, beyond the Satan/Hussein gay love story, beyond the fart and vomit jokes, and beyond the cheap shots at Canada (we do accept your apology for Brian Adams, for the record), lies a smart, even brilliant satire of American attitudes towards what media we consume. It is a shame that most people who need to understand that would never watch this in the first place. 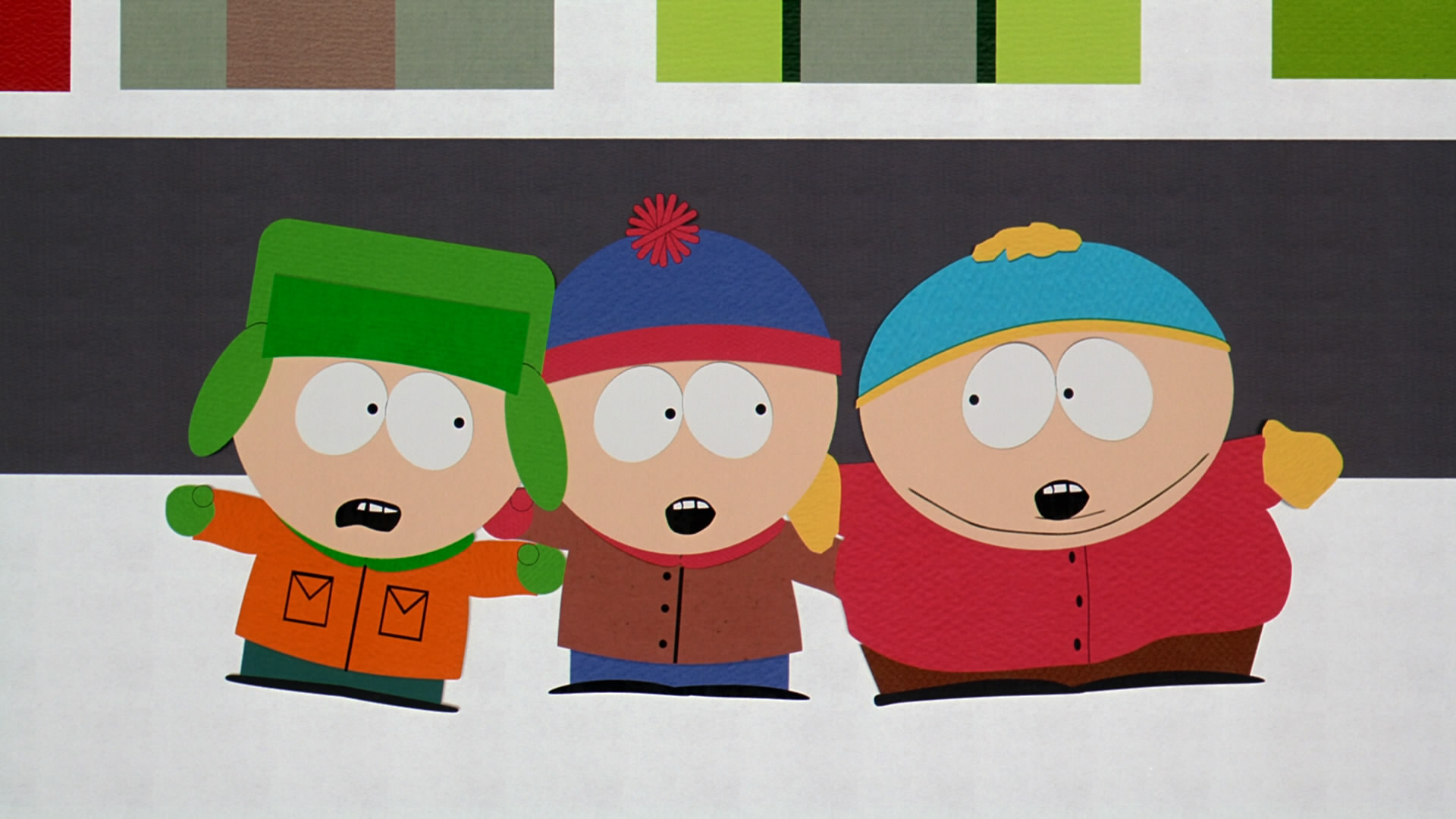 Contrary to popular belief, there is quite a bit going on with South Park’s animation. There is a real attempt at making everything appear as if it were created out of construction paper, something lost in the previous DVD version. In hi-def, and in this AVC encode from Paramount, that light level of texture is wholly intact. Every surface has a small level of various bumps and lines, enough to sell the idea.

There is no film grain present, so one can assume this was pulled from the original computer source. No signs of DNR are present, plus the transfer is relatively sharp. Colors are generally bold. The purple carpet in the rehabilitation room, the reds of hell (sorry Kenny), and deep greens of the mountains in the background are wonderfully bold. Artifacting, a significant problem with the DVD as the more complex animation in hell takes over, is cleared up without fault here.

The issue with this transfer begins around halfway through, first noted as the boys begin a search on the internet and stumble upon something involving Cartman’s mom (don’t ask). Here, significant levels of artificial sharpening have been applied, resulting in notable, distracting ringing. Oddly, in the next shot, the transfer reverts to its original, non-sharpened state.

Even stranger, random shots from here on out, especially with those from the USO show starting with 47:30, begin a downward spiral of edge enhancement. One of the final shots, a long reverse zoom of the entire town ending on the boys, is littered with the after-effects. The randomness and inconsistency of it all arguably make it more distracting than if it existed for the entire movie.

Paramount’s TrueHD audio mix is slightly flat, yet still active. The best scene is undoubtedly Kenny’s descent into hell, with swirling flames and demons, along with heavy musical accompaniment, combined into a furious mixture of uncompressed audio bliss.

Bass is the disappointment, the bombing of the Baldwins lacking any notable push from the low end. Sprouting flames as Kenny lights himself on fire are dull. The only worthy shot of bass comes during Satan’s first appearance as he stomps on the ground, creating a powerful, deep shot in the LFE.

Otherwise, the surrounds are typically active, and with hilarious effect as Kenny is being operated on. The doctor tosses his organs around the frame, captured perfectly in the appropriate channel. Fronts are split wide, keeping track of characters as they walk out of the frame. Song are lively, and those high notes suffer from no detectable distortion.

The original DVD contained nothing beyond trailers for its bonus features, so whatever is included here is at least an improvement. A commentary from Trey Parker and Matt Stone is enjoyable, especially their story about Paramount execs sitting them down to tell them the benefits of making the movie PG-13. They obviously didn’t listen. A music video, the trailers from the DVD, and BD-Live access with a downloadable trailer for the upcoming Draw Together movie are left.