Somewhere, between the awfully fake CG explosions, banal dialogue, and sluggish pacing, lies a version of Smokin’ Aces 2 that is not a total bore. Somewhere, there is a studio that might have cared enough to do a proper sequel, instead of dumping it onto home video with a miniscule budget and cheap sets.

Unfortunately, this was not that studio and the movie is every bit a bore.

Where the original was an acquired taste of rampant violence, asinine dialogue, and dark comedy, the sequel is 55-minutes of sheer dialogue, and 20-minutes of sluggish action. Walter Reed (Tom Berenger) is an aged, high-ranking FBI official. When a hit is put out on his life, he takes cover in an undisclosed location and the assassin’s come calling.

That simple, straightforward approach is enough to carry any 80-minute, brainless actioner. Michael Bay does it all the time, only with two and half hours to play with. Smokin’ Aces 2 chooses to talk… a lot. If the script contained any wit or energy, this could have been something. If director P.J. Pesce did something interesting with the camera besides tilt it at odd angles, this might have been fun to watch.

Unfortunately, it contains lifeless dialogue and the camerawork is dull.

Vinnie Jones, playing one of the assassin’s, has a role small enough to consider it a cameo. His style of rough brawling, complete with a vicious mean streak, should create a vastly superior contract murderer. Instead, he spends much of the time ducking behind a booth until he springs to life to charge at someone. 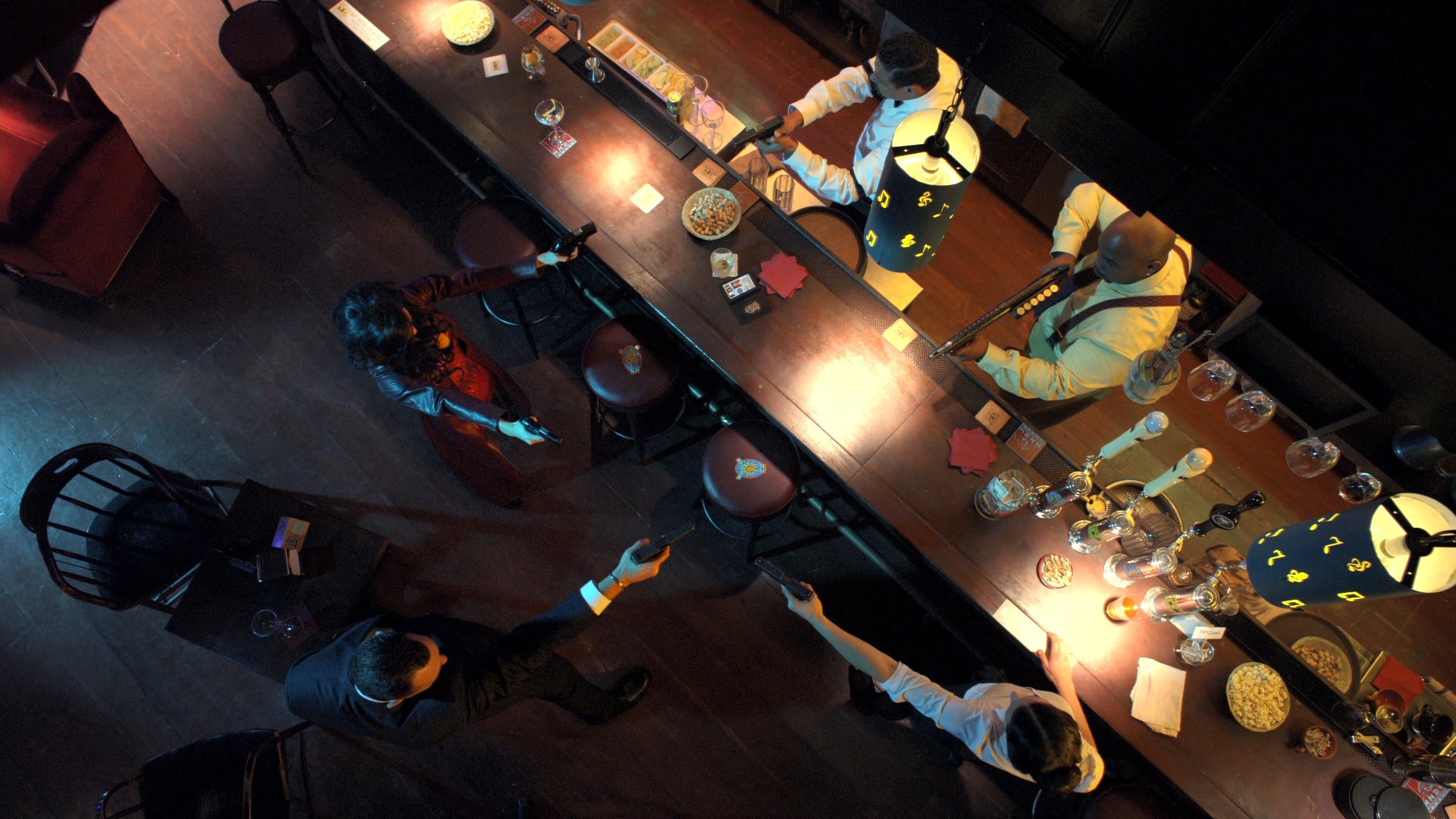 Shot digitally on Panavision’s Genesis digital camera, Universal’s VC-1 encode looks the part. Multiple color schemes, from the faded gray palette of the bunker to the saturated upstairs bar, are undoubtedly accurate to the source.

Some exceptional, even top-tier high fidelity detail occurs in close. Facial textures are consistently rich, bringing out pores and individual hairs, fully resolved. At mid-range, even the high bitrate can’t keep that trend up. That underground bunker is especially bothersome, likely a cause of the diluted color scheme. Berenger’s complex suit pattern wreaks havoc though, causing significant flicker.

Black crush is a severe problem. In the bunker, objects go from light to dark with no separation. Details on faces or clothing are lost to a black, lifeless mass. Of course, the transfer carries that artificial, clean digital look (besides some background noise) that can be a turn-off to many.

You will be hard pressed to find more powerful, aggressive gunfire than this Smokin’ Aces 2 DTS-HD effort, but that does not translate to greatness. Much of the action occurs on the low-end, delivering ridiculously powerful bass each time a bullet is fired. Sadly, it seems to muffle the high-end, as if someone turned off the treble to appease some LFE fanatic.

Surrounds, once the action begins late, keep a steady flow of crisp splintering wood, discharged bullet shells, and screams from those involved intact. Stereo channels split slightly, if not obviously so. Dialogue is mixed low, so be prepared for the jolt that comes along with the action.

Extras begin with a commentary from director P.J. Pesce and producer Joe Carnahan, who also directed the first Smokin’ Aces. Ten minutes of deleted scenes follow, with a mildly amusing gag reel after that.

Behind the Scenes with Joe Carnahan contains extensive talk about the original film, and the process of developing a sequel. The best piece on the disc is Confessions of an Assassin, a 25-minute production diary with plenty of footage from the set where the movie carries the subtitle Blowback.

Three featurettes follow, all brief, beginning with one on the weapons, another on the clown attack, the last focusing on the bunker set. BD-Live support is generic, and the disc is D-Box compatible.