Not that every moviegoer is an expert in murdering people in the arctic, but simple logic dictates a subtle, stealthy approach. Making yourself hidden amongst the countless inches of snow and ice can’t be that difficult. Unfortunately for the pickaxe murderer of Whiteout, the logic center of his brain has been turned off. His ingenious plan is wear nothing but black. Black gloves, black coat, black tinted goggles, black mask, and even a black-handled pickaxe. Brilliant.

Whiteout, not named after the correctional liquid, is just one of those movies where things like killers trudging through snow dressed all in black happens. The murderer hilariously stumbles through a building, clearly aiming to hit the walls instead of his victim. It is easy to remember that sequence, mostly because it remains the only action sequence for over an hour as Carrie Stetko (Kate Beckinsale) begins her investigation into a murder that took place at an artic research base.

The audience is introduced to Stetko by an uncut shot, passing through the hallways of the base. She arrives in her room, strips, and takes a steamy, hot shower. The utter pointlessness of the scene (not the Beckinsale brief nudity) makes it seem as if the director or the writers included the scene purely for their own satisfaction (and at least half of the audience).

She doesn’t even get a line before that scene. If it exists to tell the audience she’s a sexy US Marshall, it was never needed. She is Kate Beckinsale. If it was included purely for the visuals, well thanks.

Whiteout is filled with pointless, extended scenes. As Stetko and her mysterious UK partner Robert Pryce (Gabriel Macht) investigate a 50-year old plane crash, the ice above them caves in, supposedly trapping them. Why this is needed, as it draws no tension and the information provided could have been delivered without the collapse, is anyone’s guess.

Dialogue is either explanatory or unnatural, leading to some lines the Mystery Science Theater guys would love to get a hold of. When it is thankfully over, the man behind it revealed, your sense of movie logic has long since taken over, and you’ve realized there is only one possible candidate. Despite being responsible for numerous graphic murders, Whiteout tries to turn him into a martyr in a baffling, shocking stroke of idiocy. Awful in all regards. 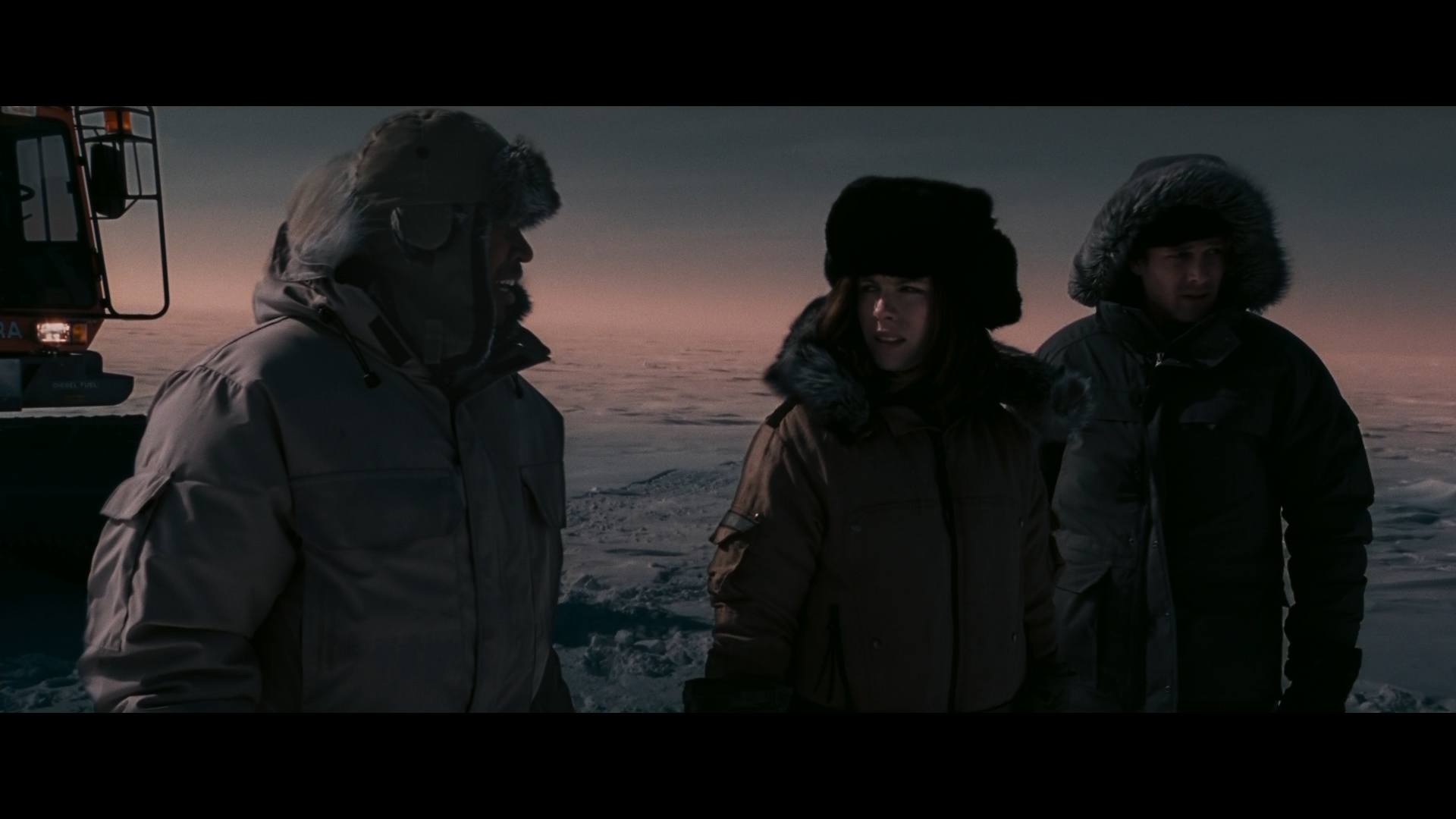 Warner strikes a generally low bit rate VC-1 encode for this Blu-ray, and the results are under whelming. High fidelity textures are rare, although strong when you can make them out. Things such as the fur on the various coats are simply not well defined. Sharpness is strong, but faces are flat, even digital at times. Scenes that stand out include an autopsy, where the formerly frozen flesh of the victim begins melting. Tiny water droplets sit on the clothing, clearly visible and delineated.

Long vista shots of the snow-covered southern hemisphere are disappointing, soft and lacking depth. Flesh tones waver, occasionally into pink territory. For the most part, they remain stable in the film’s cold hues.

Black levels are likewise inconsistent, beginning with some rather glaring crush before appearing faded and flat. Some ringing is visible, the worst case at 55:50 around the small prop plane. Fine grain is handled well. Banding is noted during the opening scene as a plane passes through clouds, likely a result of its digital creation and not the transfer.

The highlight of this TrueHD track is undoubtedly the opening sequence. A crashing plane, gunfire, a cabin depressurizing, crates rolling around, and engines ablaze create a lively, aggressive beginning. Bullets clearly ping off objects in the rear channels, and the wide, split fronts capture any action from the sides. When the crash happens, the plane delivers a resounding thud on the low-end, the best LFE shot this disc provides.

Whiteout then moves indoors for little else beyond dialogue. Only when the characters move outdoors does this uncompressed effort have a chance to work. The whipping winds of the Antarctic are prime ambiance. Characters are assaulted by heavy winds whenever they move outside, and this track performs admirably. Dialogue comes through cleanly despite the heavy winds.

One point of caution is a conversation inside a plane around the 36-minute mark. Dialogue suddenly sounds hollow, as if the recording was bad or the ADR did not go well. It seems to be an attempt to replicate some kind of echo. It fails.

Given the rather dim box office, extras are brief. The Coldest Thriller Ever showcases the difficulty of the shoot, which was actually done in frigid temperatures near Lake Manitoba. From Page to Screen discusses the original graphic novel, story origins, and the screen adaptation. A selection of deleted scenes run four minutes.