It is admirable to spend time explaining who Michael Myers is. Rob Zombie’s interpretation of the John Carpenter classic sets a goal to do so, inviting viewers into the chaotic home life of the 10-year-old Myers, tormented by his father. Unfortunately, since Halloween will descend into a pit of genre clichés, it must pull it off in a single scene.

It is breakfast in the Myers’ home, and Michael’s father (William Forsythe) spews more absurdly ridiculous dialogue than previously thought possible. It has to, because this sole establishing scene must account for all of Michael’s tragic childhood. Physical abuse, spilled coffee, a crying baby, and a sister who unbelievably takes it all in stride surrounds Michael as he hides behind a mask.

To its credit, when Michael snaps, it is chilling, a savage assault with a cumbersome log on another schoolmate. As a young Michael, Daeg Faerch is excellent. His face is suitably evil, and when behind a mask, his seemingly limp body is effective at showing his disdain for everything around him.

Eventually, Michael grows up, and the film takes the expected path. Rob Zombie adds every ounce of pointless, baseless nudity he can, along with a rape sequence in this director’s cut. It feels desperate, as if the genre is trying to escape the clutches of the cliché simply by upping the severity of the violence, or the conditions the acts take place in. That doesn’t work.

Worse, what limited story takes hold to give a purpose to these murders is based on a sequence of events so incredibly contrived, it is impossible to believe no one thought twice about it. Michael has a goal, to reunite himself with his baby sister. Laurie, now an adopted teenager, just happens to deliver some paperwork to the same house Michael killed his family in nearly two decades ago, and on the same day Michael escapes, at the same time he is standing at the front door.

Since Laurie was an infant at the time of the murders, Michael would have no other means of tracking her down. Zombie’s idea is absurd, ridiculous, and convoluted. Oddly, that seems to be a theme of this needless remake. The finale loads the screen with idiotic teens, creature feature clichés, and an ending that exists purely for the means of leaving the possibility for a sequel. Maybe that is fitting after all. 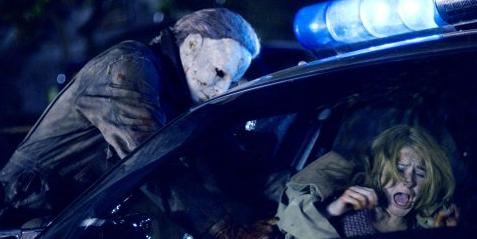 Dimension delivers a flat AVC encode for Halloween, one that needs rich, inky blacks to succeed. Sadly for this hi-def presentation, it fails. Few scenes ever deliver a suitable level of depth, leaving the film washed out. Part of that is undoubtedly intentional, but even those scenes in the happy, peppy Strode home appear lifeless in terms of depth.

Details are disappointing, with a few interspersed scenes jumping out. A conversation inside an office just past the hour mark is notable for its ability to showcase facial detail. The institutionalized Myers wears a deep blue robe, which shows individual stitches as well.

Flesh tones are accurate, and colors in the early part of the film fill the screen with vibrant primaries. The clown mask worn by the young Michael is especially vivid. Long shots of the forested areas near the school are handled well, if not as cleanly as other discs on the market.

Much of the activity offered to this TrueHD effort occurs in the front. Michael Myers is not the type to wander around a house creeping people out. He is forceful, meaning his kills are always right in front of the viewer, and likewise in the front channels.

Some ambiance is offered, including birds chirping in the rears, thunder filling the soundfield, rain offering an immersive effect, some creaking wood in a rundown home, and rustling leaves as the wind picks up.

The track does deliver the action well even if the surrounds remain subdued, especially the finale as Myers begins smashing the ceiling of a house with a large piece of wood. Splinters break off from the shattering plaster and lumber with fantastic crispness. Every broken piece seems to be accounted for. A throbbing, deep score catches on the low end beautifully, adding a creepy rumble prior to his assault.

Just to note, this is a two-disc set, but the die-hard fan needs nothing but the second disc. There resides the four hour and twenty-minute documentary Michael Lives that chronicles not only every day of the shoot, but nearly every aspect of pre-production as well.

After that, a solo commentary by Rob Zombie seems almost pointless, but he provides one nonetheless. Seventeen deleted scenes (with an optional commentary) run over 22 minutes, followed by a far better alternate ending (also with a commentary) that provides actual closure.

A fun blooper reel doesn’t wear out its welcome during its 10-minute run, while the first featurette details the creation of the new Myers’ mask. This is followed by a self-explanatory 18-minute piece titled Meet the Cast.

Casting sessions include 15 different screen tests that run close to 30-minutes, while Scout Taylor-Compton is given her own section. Trailers and BD-Live support that never actually went live remain.