Not only does Pixar consistently have incredible attention to detail when creating their worlds, including Monsters Inc. (ever notice the hole in the chair for Sulley’s tail in the apartment?), they have enormous respect for the past.

Monsters Inc. contains one of their best references, a nod to the great stop motion animator Ray Harryhausen. Mike’s girlfriend Celia is reminiscent of Medusa, one of the finest of Harryhausen’s creations from Clash of Titans. For her birthday, Mike takes her to Harryhausen’s restaurant, a sushi bar. A six-tentacled octopus works behind the counter, a subtle nod to the 1955 classic It Came Beneath the Sea.

While likely out of the range for kids, it is a perfect tip of the hat for classic sci-fi fans, and if you don’t get the reference, you don’t lose anything either.

Monsters Inc. is not the funniest of the Pixar efforts or even the most well-meaning. It exists for its charm, seeing hulking monsters running away from a three-year old girl because they fully believe she is deadly. Boo (Mary Gibbs) is adorable, brought over from the human world into the land of monsters inadvertently, or so it seems.

Pixar’s imaginative forces craft a world where creatures do pop-out of closets to scare children, using the energy from their screams as a source of energy. The process oddly seems logical, where doors are stored on a conveyor belt system, brought onto a securing device, and then opening it takes the monster into a child’s bedroom.

The true story of Monsters Inc. is that of Sulley learning to accept Boo, and even having an attachment to her. When Sulley and Mike first bring her home, they fend her off with a trashcan lid and kitchen utensils. Later, he faints (three times) when he thinks she has been sent into garbage disposal accidentally.

Of course, the film ends with energetic, colorful action sequences, some of which can become tiresome, but the intricate animation and artistry used to create them is enough to carry them. Monsters Inc. will unlikely have the lasting impact of a Wall E., but it’s not trying to be in that same mold either. This is light entertainment, and apparently, Pixar will never lose their touch for that either. 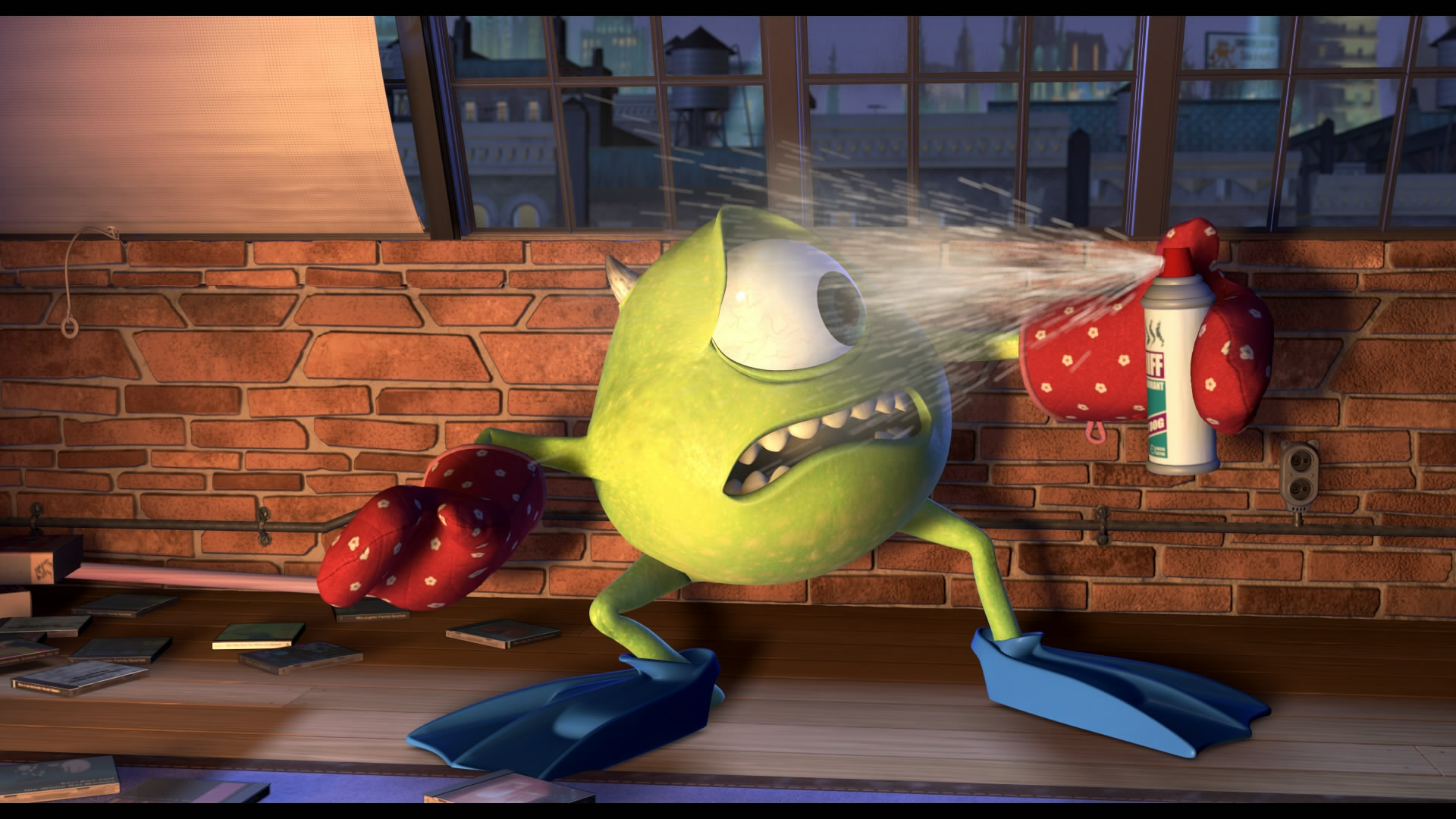 There are times when 1080p just is not enough, and Monsters Inc. is the example. Sulley is not meant for this generation, his 2,320,413 strands of hair (seriously) causing significant aliasing issues. His inner fur is fine, but those small, thin strands that protrude slightly are a nightmare. There are other aliasing issues as well, including the ceiling lights at 46:57 as Mike runs forward and the lockers. Also, a difficult, high-speed scene as Sulley races past the Abominable Snowman in a blizzard causes heavy artifacting problems for this AVC encode.

However, to be fair, this is Pixar, and when reviewing their discs, they are under an impossible level of scrutiny given their other efforts. This transfer is otherwise a stunner, with such rich, bold color, everything else in your collection looks flat and lifeless in comparison. Stunning contrast and deep blacks establish immense dimensionality in the image. Mike physically looks round as if he is popping off the screen. The first shot of Sulley, a close-up where he is sleeping in bed, is a remarkable shot that is astonishing in how much information is available in the frame.

Backgrounds are likewise littered with visible small touches. The cave scene has walls with patterns in the ice, and snow is clearly made up of individual pieces. Challenging shots such as the door room, with thousands of doors sweeping by the frame, hold up beautifully despite the complexity.

With the benefit of 3D, the final scene in the room of doors becomes a showstopper. The scene seems to stretch for miles, and shots that display the height are sensational. The tracks pop from the edges of the frames, and panicked characters poke their heads out of the center as they pass into the virtual lens.

While the highlight, the conversion process has been incredibly kind to Monsters Inc. The snow effect, despite being heavy and hard to make out, adds depth to the outcast portion of the film. Inside the Abominable Snowman’s cave, already perfect depth is accentuated via the glasses to create a lair of brightly lit ice. The work floor is a great watch, and as a villain, Randall tends to be extremely pokey towards the frame. There is an infinite amount of material to marvel at here.

Labeled as a DTS-HD 5.1 affair, this audio mix comes through as a 6.1 track. Regardless of the number of channels, this is a dynamic, active uncompressed effort. The work floor is vivid, with surround activity ranging from electricity surging, doors being moved around, and PA speakers filling each channel. When the government steps in, their helicopters swoop into each speaker, and shattering glass is wonderfully crisp.

Extensive use of the stereo channels, including dialogue and sound effects, are excellent. Whipping winds in the snow are impressive and immersive.

Where this track excels is on the low end, maybe even excessively so. When Boo laughs and Monsters Inc. has a power surge, everything drops into the subwoofer for an overwhelming blast. Likewise, when Sulley is forced to scare in the training room, his mouth produces low-end burst that ranks above even the most aggressive action movies on the market.

Note the 3D disc holds a Dolby TrueHD 7.1 mix in additional to the 5.1. It is identical to the DTS-HD mix on the 2D version.

Disney packs the case with four discs, including a DVD copy, digital copy, and two for the movie/features. Everything from the DVD has made the trip, along with a few new pieces.

A commentary is provided by director Pete Docter, co-director Lee Unkrich, screenplay writer Andrew Stanton, and producer John Lasseter. A filmmaker’s roundtable is a fun, light conversation that goes nicely with the commentary, running close to 22 minutes, as they reminisce about the experience of making the film.

Pixar’s fantastic short For the Birds is included, along with Mike’s New Car, which has a commentary from the filmmaker’s kids. A sneak peek at a new ride based on the film in Japan replaces an outdated preview of Finding Nemo from the original DVD. The second disc begins with a new game that will place you within Monsters Inc. after a quiz.

The rest of the features are from the DVD, split into two sections, Humans and Monsters. The Humans side contains 13 selections, most with individual sub-sections. These focus on the film’s creation and marketing, and there is quite a bit to go through. Some of it is short, so condensing would have been nice. The Monster side focuses on the characters, with brief clips from TV and promos. Far less interesting, but relevant.

Over on the 3D disc, you will find a new Toy Story short centered around Rex which is a real stunner technically, For the Birds, and outtakes, all of which is in 3D.