Army of Darkness bombed theatrically back in 1992, but it is hard to blame anyone. This second sequel to the original Evil Dead is tailor made for that audience, someone familiar with the humor, style, and insanity of those oddball, no-budget Sam Raimi efforts.

It’s not that you have to see the Evil Dead movies to understand the story. Army of Darkness actually brings audiences up to speed rather quickly. You need to see those films to grasp the mindset of Raimi.

You also have to be familiar with the greatness of Ray Harryhausen, the entire finale dedicated to the stop motion animator, with only half of the skill. Knowing a classic movie line from The Day the Earth Stood Still also aids the viewer, but missing that gag is a marginal misstep.

For those that do interpret the little touches, Army of Darkness is pure joy. The entire concept could have been “Bruce Campbell makes a speech about his shotgun to people in medieval times,” and it would have been successful.

Tasked with fighting stop motion and rod puppet skeleton, Campbell shows that he can interact with anything the special effects crew can throw his way while maintaining a lively visual performance. Campbell proves here he is not just the king of one-liners, but of physical horror comedy, grand scale inspiring speeches, and eating grapes from beautiful women. Who knew? 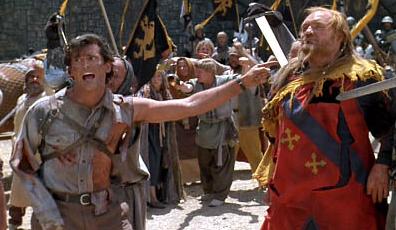 Universal gave HD DVD owners Army of Darkness with a rather awful transfer, littered with edge enhancement, noise reduction, processing, and contrast boosting. For this “Screwhead Edition” Blu-ray… nothing has changed.

Edge enhancement is thick from the opening frames. Grain, where it has been left intact, is raised by the artificial sharpening and contrast boosting, the latter leading to some blooming. Other scenes are devoid of grain, and likewise any texture. Faces are completely digital and unnatural.

What has survived, including marginally defined facial textures in close-ups, are unimpressive. Trying to make a comparison of chain mail to something like Narnia is a joke. The headaches of this presentation have little to do with age. In fact, the source is in fine shape, showing minimal wear.

The VC-1 codec seems to be the least of this transfers problems, showing no notable artifacting except when the grain spikes. Black levels are reasonably deep, certainly maintaining a fine depth during the nighttime finale with minimal crush. Colors are warmly tinted, exaggerated by the grain removal in terms of flesh tones.

Universal’s uncompressed DTS-HD audio mix does not help either. Dialogue has a faded, scratchy quality. Sound effects are generally crisp, and stereo channels are positioned well. Listen to the water splash as Ash battles inside the pit. That is fine separation.

The surrounds, on the other hand, are rather awful. Half the time, they sound like they are extension of the fronts. Audio cues like the classic spray of blood fills each channel for no apparent reason since the visual is in front. When the unseen demonic force chases Ash through the forest, trees are tumbled over, but no clear directionality exists. It sounds like an outdated Dolby ProLogic affair it is so poorly done.

The low-end can be considered as dead as the Deadites, shotgun blasts lacking any force. Joseph LoDuca’s score struggles to escape the fronts, with minimal, even distracting bleed into the rears.

Considering Army of Darkness set a small record for re-releases on DVD (as did this entire trilogy), no doubt Blu-ray will be susceptible to the same given the lack of extras. Creating the Deadites is an admirable look at the special effects, with extensive discussion of how Ray Harryhausen was their inspiration. An alternate ending that should have stayed in the movie is included, along with the theatrical trailer. U-Control brings up stills during the film, and BD-Live support is generic.