Did anyone involved in the production Wizard of Oz have any idea what they were creating? Did they ever believe this would be the most viewed film in history? Could they grasp the lasting impact, or even dream of the icon this classic would become?

Wizard of Oz carries such a grand scale, it makes it almost impossible to fathom the sheer undertaking it took to create it. Oz is a sight to behold, filled with extraordinary spectacle. The Yellow Brick Road, Emerald City, The Wizard’s room, and the Wicked Witch castle all draw instantaneous recognition.

Oz stands as the ultimate MGM musical, more or less due to its lasting legacy. It is hard to imagine childhood without recalling Ray Bolger’s spaghetti-legged dance as he sings, “If I Only Had a Brain.” Likewise, Judy Garland’s rendition of “Somewhere Over the Rainbow” is remarkable, with no need for a dance number or special effects to sell it.

Director Victor Fleming, rarely given enough credit considering he also directed Gone with the Wind the same year, brings out the most from the unforgettable string of actors. The sheer composure it must have taken to fully choreograph 100+ munchkins as they dance and spin, plus make it appear visually exciting is hardly a small accomplishment.

Oz’s visual effects and imagination, from living trees to miniature flying monkeys and breathtaking matte paintings are astounding, giving the film a magical tone. Oz is not striving for realism, but that rare fantasy quality few films are brave enough to attempt. Imagination, projected properly on screen, can carry any story. Wizard of Oz has that rare quality which is why the movie remains so beloved to this day. 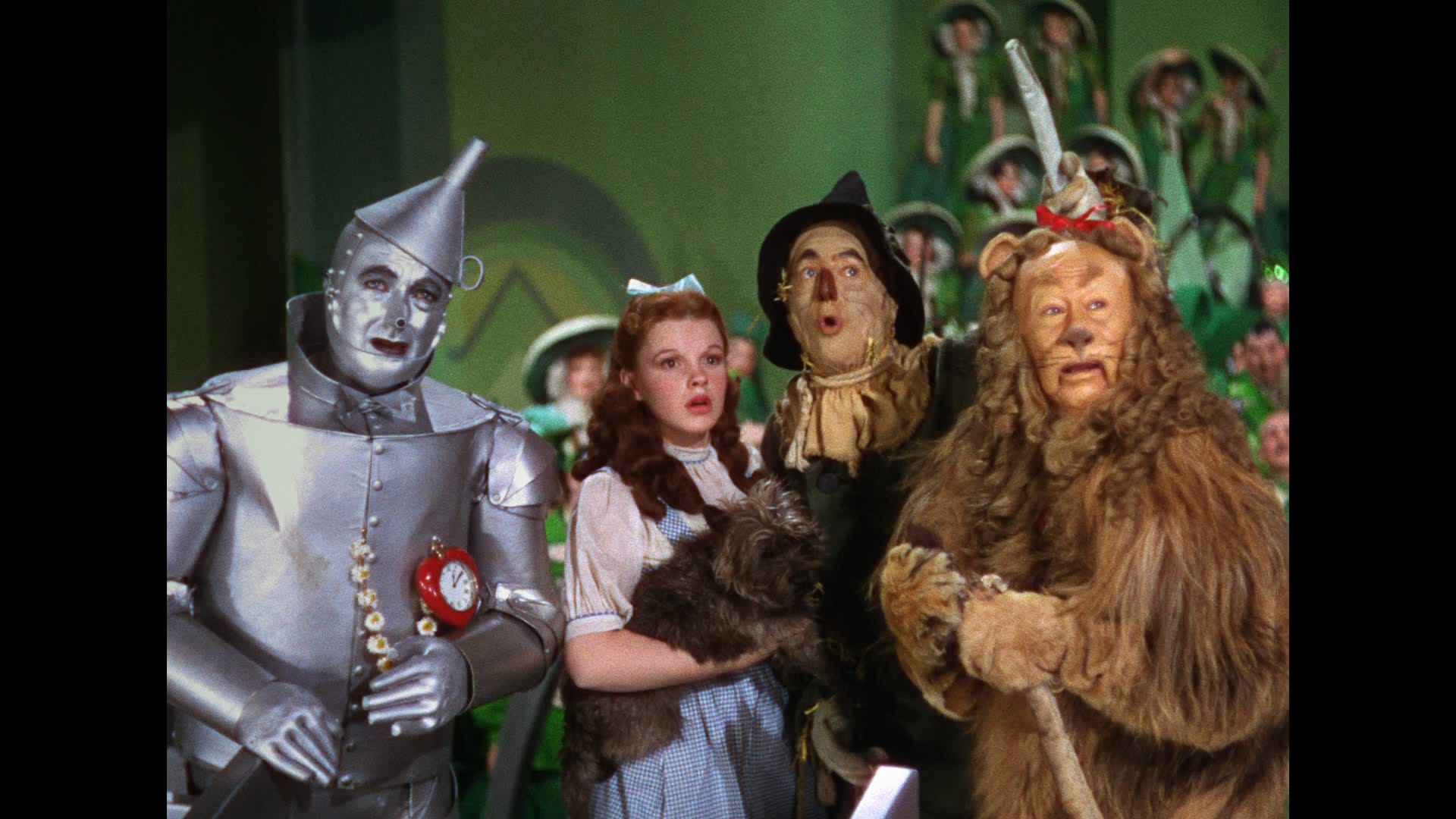 Warner’s 8K restoration for Wizard of Oz is nothing short of miraculous. Even contemplating where to begin lavishing praise upon this unbelievable VC-1 effort is tough. This (mostly) razor sharp effort saturates colors to bring Oz to life as it never has before. Dorothy’s first step into the world of color seems to have been made to toss hi-def fanatics out of their seats, for when viewing the staggeringly rich blue hues of the water, bright reds of the munchkin clothes, and deep forest greens of the plastic plants, jaws drop.

The beauty of Technicolor truly shines in HD. Emerald City, with its countless shades of bright greens, is almost impossible describe. The flames from the Wizard’s machine are warm, bold orange. Sepia sequences are notable for their deep black levels and magnificent depth. In fact, black levels are flawless, and phenomenal shadow delineation capturing even the smallest wrinkles in the Wicked Witch’s dark cape.

Blu-ray allows for small, miniscule details to come alive. Dorothy’s checkered blue dress could have been a nightmare, but each piece of that pattern is individually defined. Burlap on the Scarecrow’s face is clearly visible. The Cowardly Lion’s fur is strikingly delineated down to individual strands. Creases in the make-up of the Tin Man are easy to spot.

Rocks in Kansas can be individually picked out, and textures are distinguishable. The felt worn by the inhabitants of the Emerald City is clearly visible. The line on the Lollipop Guild’s head where their balding caps begin can be picked out without fault. Print damage, aside from a hair or two left on the frame, simply showcases how meticulous this restoration was. Not a speck is left, and the digital transition has had no noticeable ill effects. Expecting more than this, at least in this video generation, is absurd.

Audio, in either uncompressed TrueHD or compressed mono, is truly grand. Each song contains a high level of fidelity, as if they were recorded with modern equipment. The high end is free of distortion, and no static can be heard.

Dialogue is crisp and clean. Even under heavy strain, such as the Wizard’s room with music, explosions, and yelling, it all comes together as individual pieces, not a jumbled mess. Any surround use in the TrueHD mix is entirely inoffensive and handled with care, such as the whipping winds from the twister.

There is even a light undercurrent of bass from the tornado, and satisfying thud when the house crushes the Wicked Witch of the East. Now it is easy to understand why the Munchkins were so excited she was killed; it must have sounded like this.

Warner delivers the Wizard of Oz in a rather extravagant box set. Inside the glossy Collector’s Edition is a hardbound book, Behind the Curtain of Production 1060, filled with actor profiles and behind-the-scenes stills. A replica of the 1939 campaign book is loaded with clippings for newspapers and posters. A sheet with the movie’s cost breakdown is interesting if somewhat difficult to understand, and a surprisingly nice watch sits inside an embossed tin case.

One issue to note is the back of the box, which has four 8×10 glossy cards of the four main characters glued inside a plastic wrapping. Taking them off is guaranteed to leave at least a small tear on the green coating, and once out of their wrapper, they don’t fit inside the box set either. Who thought that was a good idea? 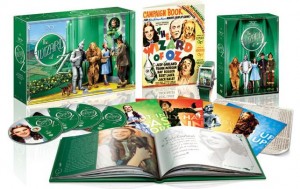 On the discs themselves, all three of them (four with a digital copy), are all previous DVD features, plus the not-quite-six-hour documentary, When the Lion Roars that details MGM’s output up to the 1950s over on the third disc.

The first disc houses a commentary from film historian John Fricke, but pulls interviews from 12 others during the discussion for a completely insightful track. The Making of a Movie Classic is the core documentary on the film itself, running just short of an hour, and hosted with the distinctive narration of Angela Lansbury (as are most of these features).

The Art of Imagination looks at MGM’s enormous studio lot during the production, and how each department was involved. Legacy of Oz details the original TV airings and how they began the true impact of the film. Memories of Oz aired on Turner Classics, including recollections from surviving cast and family. The latter three all fall just short of 30-minutes each.

Lansbury narrates a simplified version of the original book, along with some animation to spice it up. Restoration of Oz details the exhaustive process of bringing the film’s audio and video up to date.

A section of the disc entitled “We Haven’t Really Met Properly” splits into nine sections, each offering a brief featurette on the key players and their careers. Three radio broadcasts are followed by the option to view the movie with sing-a-long lyrics.

A few studio shorts are relevant, however briefly, to Oz in some way. Another Romance of Celluloid details the use of electricity in movies, with brief set footage from the early Oz set in which Judy Garland was blonde. Cavalcade of Academy Awards is a brief clip in which Garland is given an Oscar. Texas Contest Winners is not a special short news piece because it features a small tour of the lot, but because Buddy Ebsen comes out of the backdoor of the stage and is announced as the Tin Man, obviously before the make-up would get the better of him.

Off to See the Wizard is a collection of cartoon shorts used for TV presentation, followed by some 16MM footage shot by composer Harold Arlen of the actors getting photos taken in full make-up. Five outtakes and deleted scenes run 4:37, which are then followed by tornado test footage. Still galleries and a selection of six trailers from various eras are here, along with generic BD-Live access.

That was just the first disc…

The second disc houses three featurettes, beginning with Victor Flemming: Master Craftsman. This offers a general history of the director, detailing his famous films, running 34:08. L. Frank Baum: The Man Behind the Curtain is an excellent piece on the original author, including interviews with various family members. This goes for 27:45. Hollywood Celebrates its Biggest Little Stars is all about the Munchkins, including numerous interviews with those who played them.

Finally (thankfully) are six different movie versions of Oz, including a full- length silent version and a cartoon short. Also, the TV movie from 1990 Dreamers of Oz is included, a biographical piece on L. Frank Baum, which was sadly recorded on tape and it looks the part.

Update: Here is a video review of all the boxed contents: