Maybe the producers or the studio should have called this Megan Fox’s Body. Not only would that have fit the cheeky style and tone of the film, maybe audiences would have grasped what Jennifer’s Body was trying to do.

There is no question this movie would have been wasteful without Megan Fox. The entire point is that she plays a character who succeeds based on looks alone, undoubtedly the reason she is currently a star in Hollywood. Playing Jennifer, she sells (completely) the “popular girl” mantra, prancing around school hallways as if she owns the place.

Jennifer’s Body uses the clichés of the typical high school movie, but with Diablo Cody writing, they excel at being more than jocks and emo kids. Darkly humorous, the Goths morn their fallen friend, turned into a pile of “lasagna and teeth” according to the mother.

The film is loaded with priceless, even hysterically funny one-liners, but hardly throw-aways. They do still serve a point, particularly during one of the final confrontations inside an algae-infested pool. Jennifer, possessed by a curse, has attempted to eat her best friend Needy’s (Amanda Seyfriend) boyfriend. They rant and rave only like two teenage girls could, but with a sly satire undermining the dialogue.

Jennifer’s Body makes for far better comedy viewing than horror. Trying to contemplate character actions becomes a chore. If your friend vomited black gunk out of her mouth which then began turning into prickly spikes, chances are you would call someone for help. Lavish, over-the-top gore doesn’t add much either, with the sole exception of a deer munching on someone’s innards.

This is a movie that knows its audience better than the marketing team (who incorrectly sold the horror), putting Megan Fox inside an Evil Dead shirt while the poster also hangs in the background during a particularly “hot” scene. That’s what Jennifer’s Body is aiming for, and it nails it. 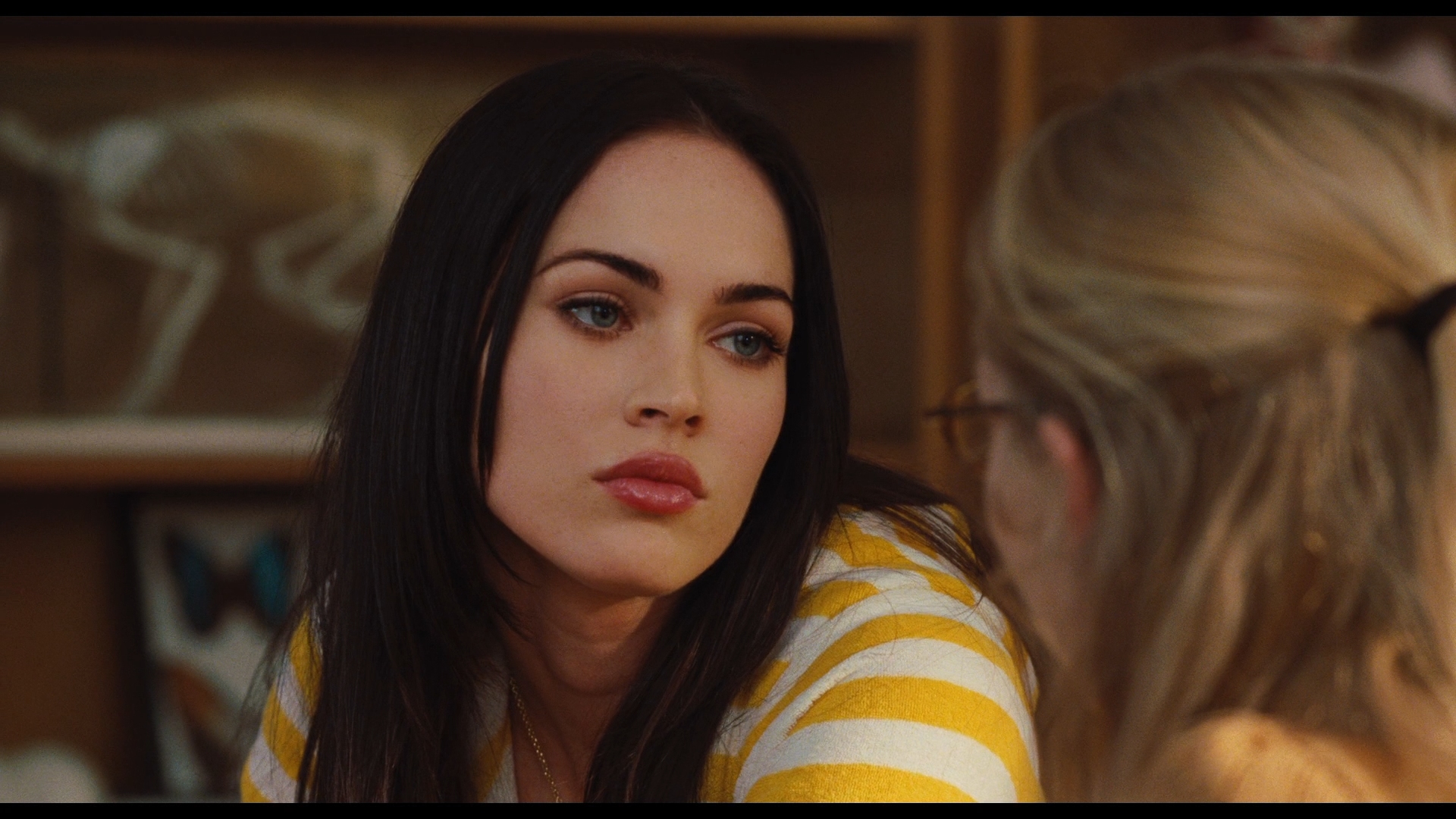 Fox delivers a stand out AVC encode, possibly one of the best of 2009. Remarkably clear and sharp, high fidelity detail is outstanding. Facial textures are spectacular, and clothing is cleanly defined with individual stitches visible, varsity jackets in particular brimming with texture. The transfer does this at close and mid-ranges without question. Look at the cork board in the classroom, its distinctive look perfectly visible.

Multiple scenes inside a forest are just jaw dropping in how well they are maintained. Leaves on trees deep within the woods are easy to pick out. Compression is not a problem. A moment of aliasing is evident on a casket around the 1:10:50 mark, but passes quickly.

Black levels are outstanding, with wonderful shadow delineation evident. Watch as Needy comes back home to find her mother missing from the couch. She lays down in limited light, pores and individual hairs still evident without fault. Even inside the band’s van where nearly no light seeps in, Fox and the guys are perfectly defined in terms of detail. A bright, even cheery color palette is evident, further adding to the eye candy, and that has nothing to do with Fox herself.

A DTS-HD mix is not quite as impressive as the video, but still robust and full. A bar is lively early in the film, and as it catches fire, the flames rip through the soundfield. Explosions rock the subwoofer as the blaze continues to sprout up during a conversation outside.

Music is forceful and crisp, including two band performances that shine. The soundtrack, action, and dialogue remain perfectly in sync with each other. Some expected ambiance inside the woods is relatively non-existent, and school hallways should be livelier, but these are minor faults in an otherwise enjoyable effort.

Two commentaries are included, the first exclusive to the theatrical cut featuring director Karyn Kusama and writer Diablo Cody. The second, over the director’s cut, features only Kusama. The director’s cut does adds around five minutes, but also alters dialogue, including the first lines of the film. Both are worth watching, although this is a case where the theatrical cut is a little tighter and snappier.

Six delete scenes run for 14-minutes, followed by a brief five minute gag reel. The Dead Pool is a general making-of filled with praise for all involved. Four video diaries are more entertaining, including plenty of raw footage from the set.

Two campy features focus on Megan Fox, including a one-minute montage of her “best” scenes and a hilarious peer pressure PSA. Life After Film School is an episode from the Fox TV series focusing on Diablo Cody. Trailers are left.