The Princess Bride is more than a play on the typical fairy tale clichés. Yes, all of the clichés are present, from the evil king, the princess, the hero, a giant, wizards, and a love story to tie it all together. Despite that, it is wonderfully imaginative, not to mention slightly dark and intelligently witty.

The film has a lot of fun with death, as morbid as that seems. Cary Elwes plays Westley, the hero of the piece trying to reconnect with a lost love after turning to a life of pirating. A group of bandits has kidnapped his lover, and in that group is Inigo Montoya.

Westley is on the trail of the bandits, climbing a mountain as Montoya waits at the top. The conversation that follows, one that turns Westley and Montoya into friends, is priceless. They taunt each other while carrying on an honest conversation filled with clever anecdotes and character development.

The fight they eventually must enter into seems somewhat meaningless. The conversation has sold it, so even if the choreography didn’t hold, the entertainment value would still be present. Thankfully, the fight works too, a fast-paced, taunt filled romp filled with entertaining choreography during their (supposed to be) fight to the death.

Robin Wright Penn is Buttercup, a princess determined to believe her lost lover will come to rescue her, and threatening to kill herself if he doesn’t. Being a fairy tale, there is little tension, and Princess Bride makes up for it in countless ways.

William Goldman is responsible for the script and the book, crafting uproarious lines such as, “We’ll kill each other like civilized people,” stated by Westley to Fezzik (Andre the Giant). Countless quoted lines live on into pop culture references as the movie continues its run through generations.

Billy Crystal steals his scene as Miracle Max, restoring life to a partially dead (?) Westley. Unfortunately, the potion Westley is given does not restore his strength, requiring a challenging physical performance on the part of Elwes that he gladly accepts and runs with. It makes for a lively finale that could have easily settled on the main characters duking it out for the princess.

Princess Bride almost feels self aware of its mountain of clichés, but only uses them to push the story forward. It warps many of them, turning the film on its side to feel inventive and original. Over 20 years later, it still feels the same. 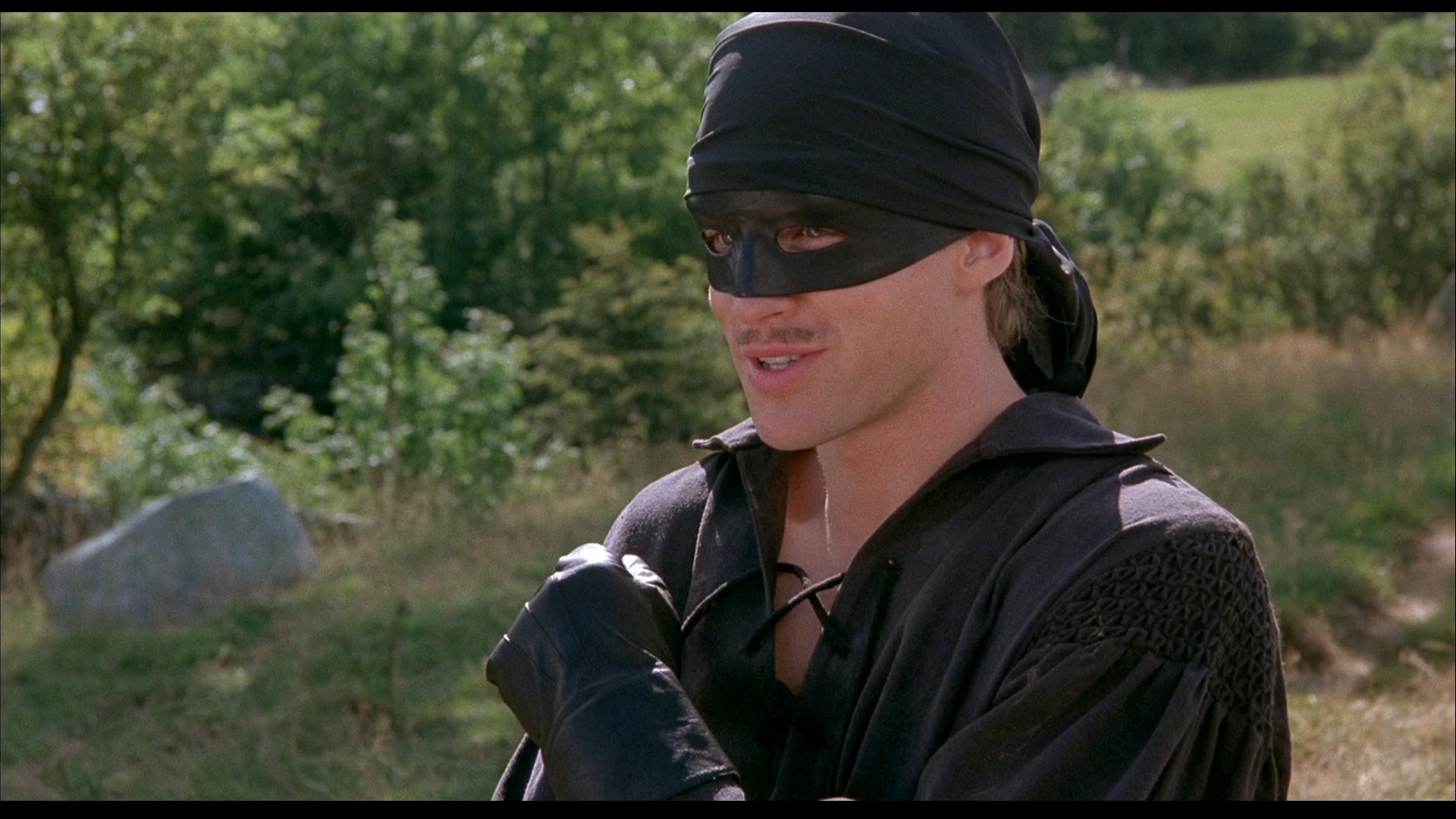 Fox delivers a clean encode for Princess Bride, one that is bright, well saturated, and free of print imperfections. Accurate flesh tones are appreciated, as is a strong, unobtrusive grain structure.

The AVC transfer sports strong detail (if not up to par with the best discs on the market), and crisp cinematography. The rolling hills and castles are spectacular in their crispness, and no artifacting is evident. Blacks are deep, and the contrast is appropriately bright.

A DTS-HD Master mix is perfectly suitable. Moments of surround use include the fire swamp sequence and torture room. These nicely fill all channels. Mark Knopfler’s dated score likewise bleeds into the surrounds.

Brief low-end punches are delivered by spouting flames in the fire swamp, and fidelity is quite strong. Dialogue is crisp, and sounds modern. Still, most scenes are flat given their nature, and are hardly material worthy of showing off your equipment.

Before getting into the extras, special kudos to whoever came up with the idea for the box art, which amazingly flips the title upside down and right side up while remaining legible. That’s fun design.

On the disc itself are two commentaries, one from director Rob Reiner and the other by writer William Goldman. Combining them would have made more sense, but each offers their own take on the story and talk about different aspects.

As You Wish is the longest feature on the disc, coming in just under a half hour, turning into a fun retrospective in the process. Other featurettes (six in total) come in over an hour, detailing the sword fights, fairy tales in general, the real pirate Westley claimed to be, and the make-up process on Billy Crystal.

A Carey Elwes video diary carries some rare footage as he discusses his experience on the set, and it is a shame there is not more to see. A trailer lies at the bottom on the extras.