It is easier to relate to someone, at least in a younger generation, who starts up a small blog and suddenly finds herself successful, especially compared to someone who writes a book because she graduated from a culinary school.

Then again, maybe it is just Amy Adam’s general perkiness that makes Julie Powell so likeable. For the heaps of praise, deservedly so, lavished upon Meryl Streep for her portrayal as Julia Child in Julie & Julia, it is Adams’ who makes a simple, light story so completely engrossing.

Adams has a carefree, light spunk as Julie Powell. This woman is stuck in a dreadful job, and suddenly gains inspiration. You can see it in her eyes as the idea to cook all 500+ recipes in Julia Child’s “Mastering the Art of French Cooking” in one year blooms. She is excited, thrilled at the idea that something can break her out of a life rut.

Child, of course, became an icon. Her story concerns dealing with book publishers, moving, and learning the very craft of cooking. It doesn’t contain that quirky edge or general average-ness that an audience could relate to. Her rise to fame and success is a fantastic story in its own right, but weirdly challenged when up against the meager story of Powell.

Whereas Child faced a series of men in her quest to obtain a degree, Powell has to deal with killing lobsters. The entire odyssey, from the saddened look on her face when the lobsters are chosen, the priceless look on the lobsters face as it peers from the bag, to the actual cooking are wholly memorable. Powell’s story is colorful and lively. It is entertainment, while Child’s story is biographical.

Of course, the two stories are told together for a reason. Child’s and Powell’s stories are remarkably, even eerily similar. Both are looking to fill a void in their lives, both find inspiration in writing and cooking (despite a difference in technology), both suffer tremendous letdowns, but undoubtedly persevere in their own way.

However, the sense of wonder and accomplishment is powerful in Powell’s tale. She did not set out to write a successful blog. It just happened. Child, despite the perfect portrayal from Streep, doesn’t have that same sense of progression. Only in the end when the publisher chooses to pick up her book does Child’s story completely connect. By then, Adams’ understated performance has won the audience over. 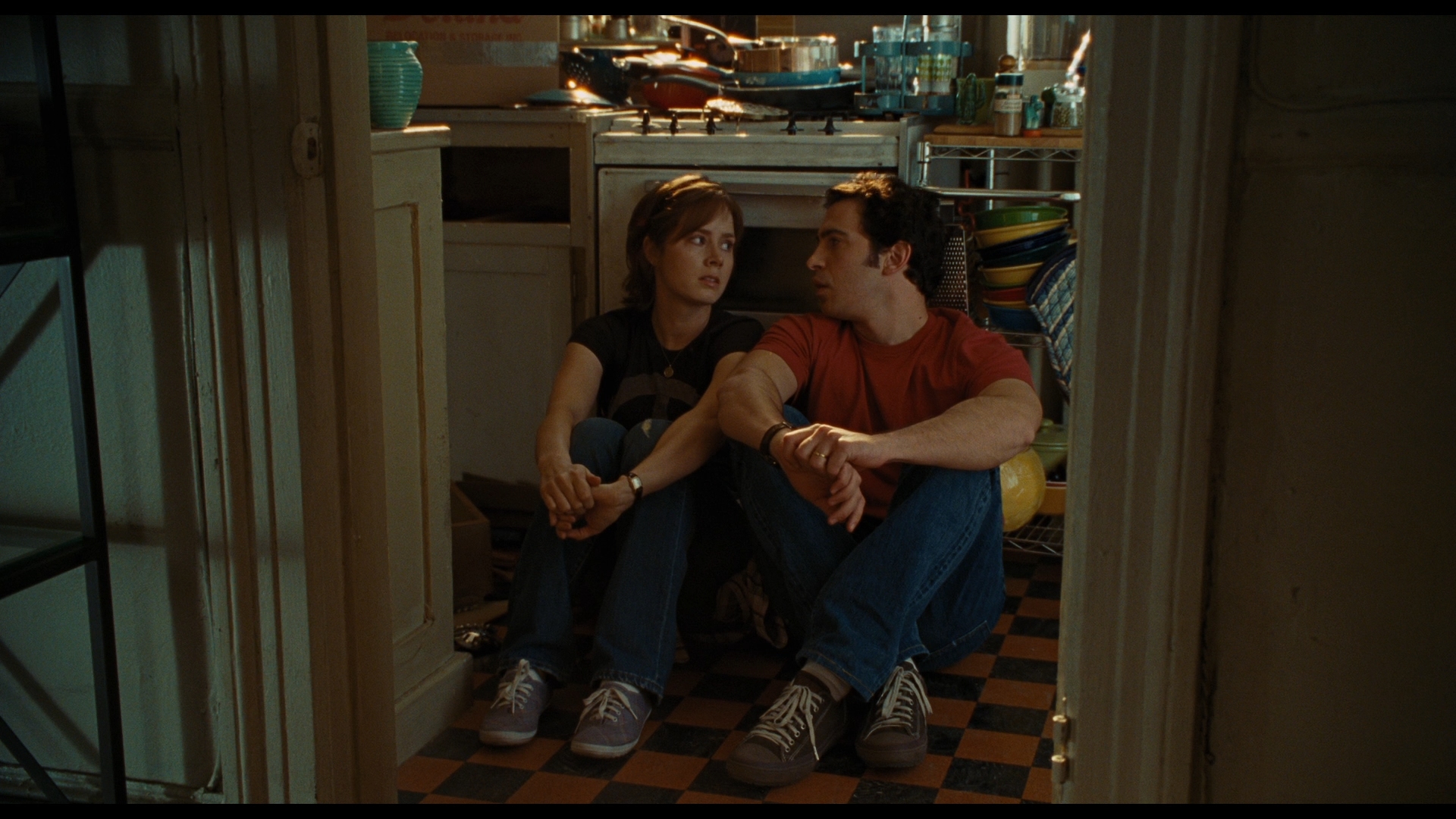 Sony delivers a fantastic AVC encode for Julie & Julia, a pleasant surprise that aids the movie. Notably, few discs handle complex distance shots this well. Bricks on buildings a block or so in the distance on New York streets are clearly defined. The French cityscape, with its complex photography that includes trees and grass, is remarkable. Every leaf and blade of grass is flawless. A true test is a wedding right at the half-hour mark, where people, flower petals, lush trees, and a lawn are staggeringly well done.

Julie & Julia is graced with a natural color palette, only slightly saturated. Vibrant blues and greens pop off the screen. Flesh tones are excellent, and a bright contrast is instantly notable. Black levels establish a satisfying depth, if not the richest available.

Sharpness is consistent, and the grain structure left intact. Facial textures are not top-tier material on a regular basis, but still satisfying and notable. Minor high contrast ringing is evident on a few occasions, although it remains a tough catch if you’re not looking for it.

A breezy, light score is made into a focal point for this DTS-HD effort. The sweeping music is flawlessly bled into the rear channels for a great enveloping effect. Dialogue is expertly handled and inserted into the mix without fault.

Some minor ambiance is noted in the city (New York is always a given for the occasional police siren), although the level of immersion delivered by the music makes a far greater effort in drawing a viewer into the film.

Director Nora Ephron delivers a commentary to kick off the extras, while a fine making-of titled Secret Ingredients follows. Family and Friends Remember Julia Child is a collection of interviews from (who else?) family and friends of Child. These are insightful and informative, well worth the 47-minute runtime.

Julia’s Kitchen is an interview with the museum curators who saved Julia’s kitchen for the Smithsonian. A series of five cooking lessons, of course with Child leading the way, round off the core extras before trailers and typical BD-Live portal access finish the disc off.