Human behavior in District 9 is deplorable. MNU employee Wikus Van De Merwe is investigating the alien-populated District 9, and discovers eggs laid by the Prawns, the latter term offensive slang for the aliens. The eggs are against the policies created by humans for the aliens, undoubtedly against their will, and they are ordered to be burned.

The eggs pop “like popcorn” as Wikus describes it in this early scene, all human characters involved carrying a large smile on their face as screams from the hatchlings are heard.

This generates sympathy for the stranded alien race. Their mothership is stalled in the sky above Johannesburg, South Africa, and humans have confined them to a small area of the city titled District 9. Their living conditions are disgusting, the insect-like creatures struggling to secure nourishment, cat food acting as a drug to satisfy their cravings.

There is a lot to take in when watching District 9. Parallels to South African apartheid are obvious, and publicly known, but as a film, there are questions.

The aliens seemed to have arrived on Earth by accident, staying inside their damaged mothership for months after their arrival until humans went in to investigate. What is notable are the weapons. The alien race carry countless powerful weapons, usable only amongst themselves. These are (likely) not peaceful creatures.

Prawns do not fight back as humans expose them to these conditions only due to deteriorating health and weapon confiscation. Would they have fought back? What was their intended destination? District 9 fails to provide this information, lessening the impact of the material.

However, the story gaps are not as large a concern as the cartoonish, over-the-top violence that is completely wrong for a story struggling to pull emotion from the viewer. At one point, Wikus commanders an alien mech suit, sucking a pig onto one of its cannons, blasting it out and killing a human soldier with it. That bizarre moment is one of many goofy kills, many of which involve splattering heads or even entire bodies.

It comes off as a sensationalized attempt to show the weapon power available to the aliens, but only reinforces the open plot aspects. It also seems to go against the remarkable visual effects work, aided greatly by a documentary feel, from WETA. The aliens are living beings, fully realized creations. It is a shame their intentions are not clear. 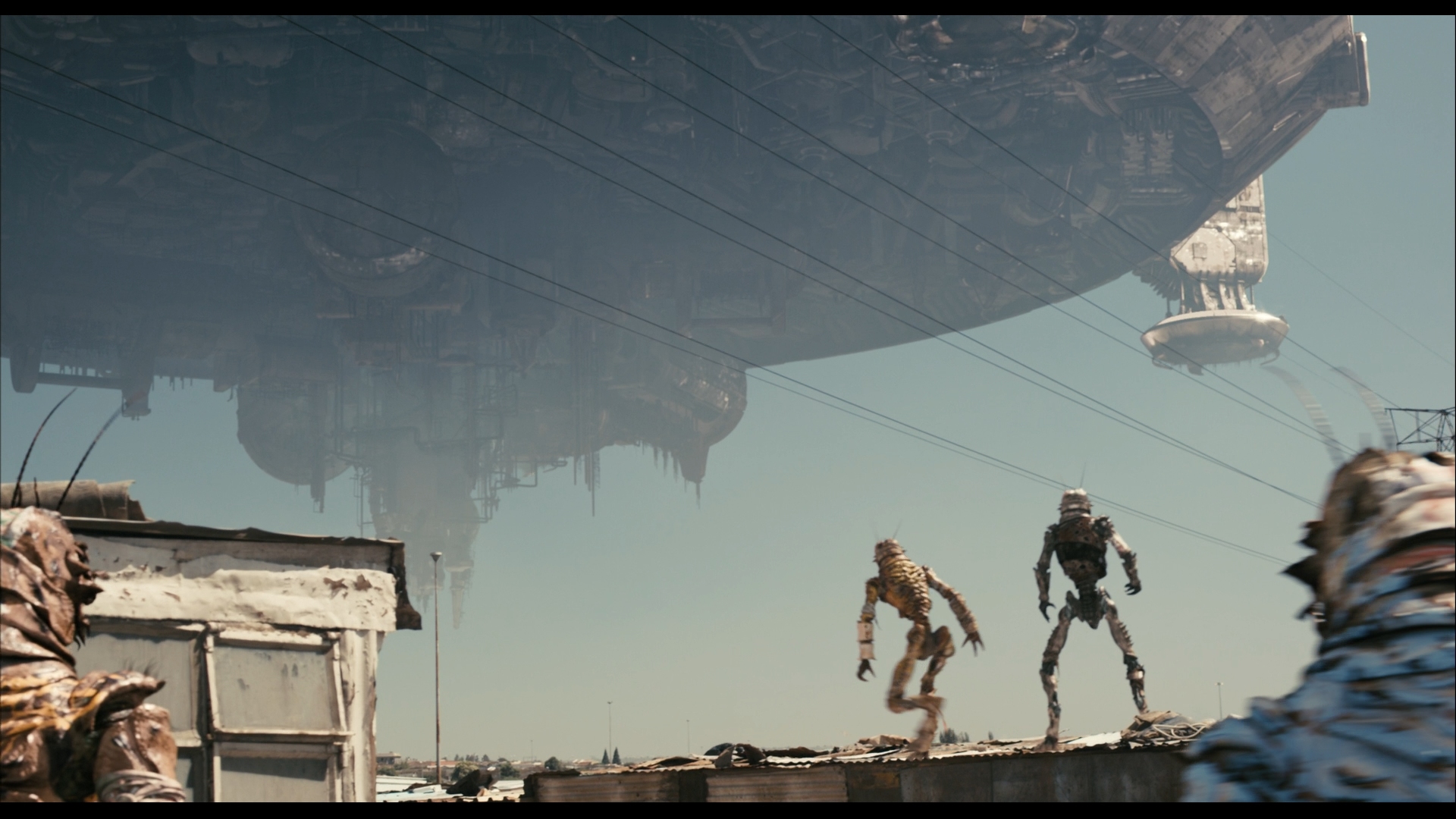 District 9 was shot digitally using the Red One camera in 4K. The down conversion from the significantly higher resolution seems to have only caused minor problems.

It is notable that a variety of styles are implemented. Footage from the beginning of the arrival are made to appear as if shot on tape. Some tests Wikus is put through look as if they were shot on low-grade digital cameras, with notable noise and edge enhancement.

That is all entirely intentional. Most of the film is remarkably crisp and clear. The AVC encode from Sony is phenomenal at times, truly capturing high-fidelity detail to rank amongst the best discs on the market. Sharpness is exceptional, and the natural, lifelike color brings out a wonderful realism. Facial textures are fantastically defined. This also leads to an easier appreciation of WETA’s animation and texture work.

Lighting in District 9 seems mostly natural in outdoor scenes, leading to a hot contrast that bleaches detail. Black levels are typically fine, although the brighter lighting tends to naturally gray them out slightly. Depth is still superb. The digital nature leads to some problems in longer shots, especially those complex shots done from helicopters or those framing large amounts of shantytown. These take on a notably murky quality, lacking the crispness of before. There is also notable ringing throughout the movie, although limited enough to only be a problem for videophiles.

Before noting anything else about this DTS-HD effort, the sheer power of the mothership’s engines deserve a special award. The rumbling, deep, and flawless bass as it fires up, shattering windows miles away in the city closest to the alien camp, is simply awesome. Likewise, beefy, strong explosions from missiles generate a fine impact, although not one as satisfying as those engines.

Much of this mix is focused on a fine layer of ambiance. Something is always happening in the surrounds. The opening interview captures Wikus’ dialogue in the center as expected, and the cameraman’s questions in the rears. Dogs bark, helicopters fly overhead, babies cry, sirens blare, and a wonderfully immersive echo occurs inside the alien ship.

Action scenes are, of course, active. Bullets ricochet in various directions, pinging off objects with superb accuracy. Exploding bodies are sonically handled with parts flapping through the soundfield in all channels. Other explosions have debris falling in each speaker, a wonderful wrap-around effect if there ever was one. All of this happens with perfectly audible dialogue that sits cleanly within the mix.

When the menu pops up, you are given a choice of selecting a human symbol or a prawn. The only difference is the menu design. All choices are the same.

Director Neil Blomkamp offers a solo commentary, followed by a selection of 22 deleted scenes, many of which are worth watching (a rarity). Alien Agenda is the core making-of, a 34-minute piece split into three parts detailing the usual concepts such as the genesis of the idea and executing it.

Four featurettes follow with an average runtime of about 11-minutes. Make-up, dialogue improv, pre-visualization, and the CG work are all profiled in well-executed pieces. An interactive feature called Joburg from Above uses an interactive map to lay out various details of the city, mothership, and more. It’s fun and nicely designed, if needlessly cumbersome for the sake of the visuals. Usual Sony Blu-ray features include generic BD-Live connectivity, CineChat, and MovieIQ.