The first chapter of Quentin Tarantino’s Inglorious Basterds is a film by itself. It is staggeringly well written, creating fleshed out characters and a full story from a single scene. It has the necessary three acts as German officer Hans Landa (Christopher Waltz) slowly interrogates potential Jewish sympathizer Pierre (Denis Menochet) in his home.

Much of Inglorious Basterds is an interrogation. Hans is a master at manipulating people to discover their intentions, and the expected dialogue strings are at times repetitive. The trick to Basterds is figuring out the interrogation, or whether or not one is even taking place. Tarantino’s words, acted by capable actors, are immensely involving, and leaving out certain critical cues puts the audience at a disadvantage, along with the characters.

Trailers for the film showcase the action, although it is no fault of their own. Breaking any piece of these dialogue trees, taking them out of their context, means they don’t work. They are carefully constructed, and not a line is wasted. An entire game is played where a Nazi soldier sticks a card to his head, and must guess what it says by asking the others at the table questions. The others are traitors, and keenly use a specific film icon on purpose. The conversation needs room to build and breathe. Without it, nothing works.

More importantly, the Basterds, a group of American soldiers who enjoy taunting and scalping Nazis, are secondary characters. Shown in previews running through hallways, gunning down Germans, that could not be further from the point of this fictional depiction of the war. Despite their violent, uncaring ways, they’re secondary characters behind Hans. His story is also one of deception, leading to a fantastic twist, creating yet another immersive, involving string of dialogue as Hans interrogates captured members of the Basterds.

Inglorious Basterds is uncomfortable to watch, not because of a few gory scenes, but because of its unpredictability. Each chapter is increasingly intense as Tarantino builds his story, all of it coming back to the opening scene. One mistake on the part of the Nazi’s self-proclaimed best detective sets the stage for a flawlessly constructed story, one crafted from dialogue only Quentin Tarantino could write. 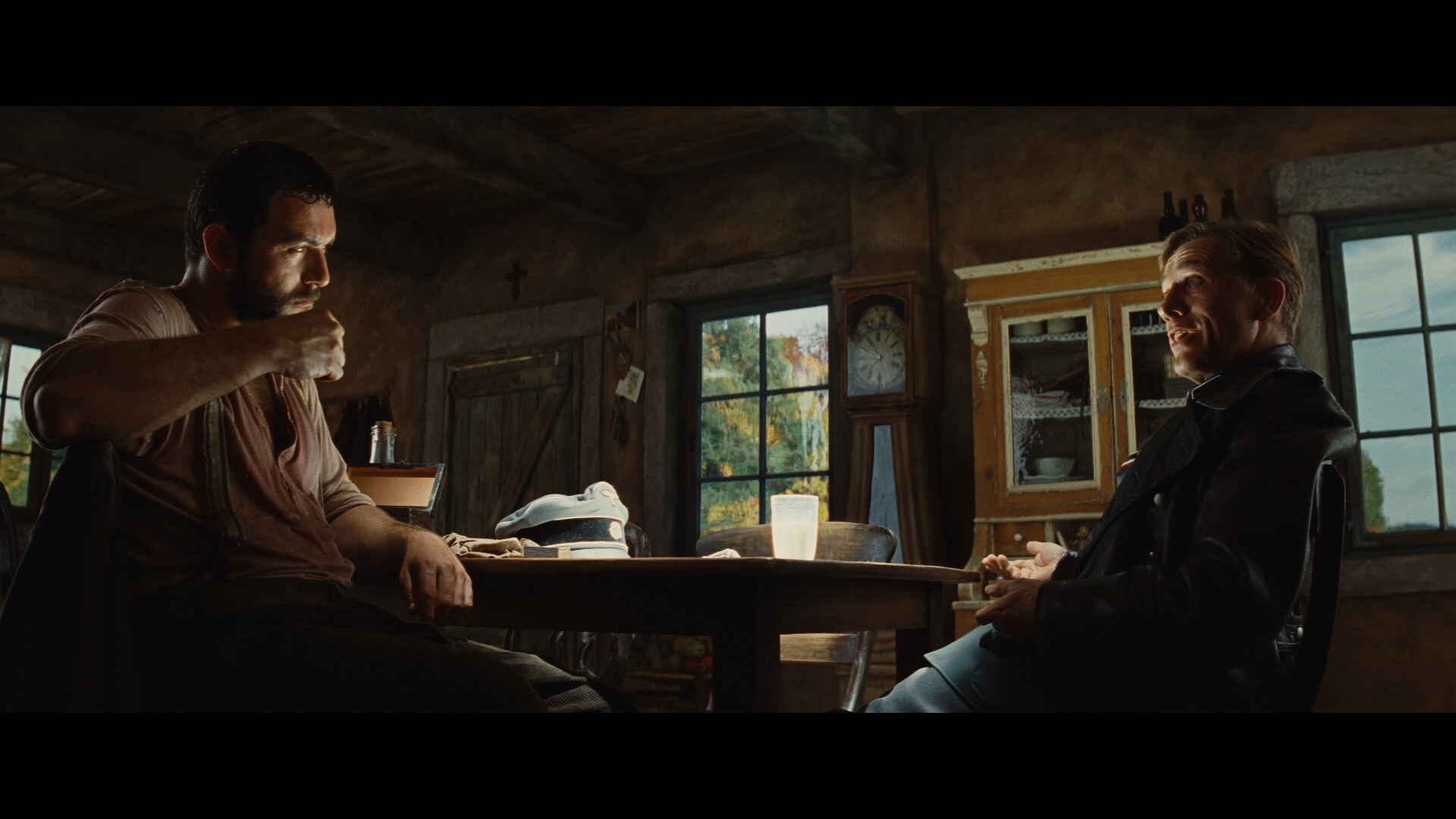 Universal delivers a generally sharp, detailed AVC encode for Basterds, one typically filled with excellent textures and definition. The opening frames, a complex long shot loaded with grass, is maintained with limited artifacting. From there, faces take on excellent detail, usually retained in mid-range shots as well. Still, there is definite inconsistency that eliminates high fidelity detail from some shots. That said, items such as uniforms look stunning, with incredibly rich stitching and definition around medals.

Black levels never feel fully resolved, but still retain depth. Contrast runs hot in the opening scene, undoubtedly intentional. Color is well saturated, the red Nazi flags bursting from the screen. Flesh tones are vivid but accurate. Sharpness is routinely excellent, with momentary drops due to the photography (the dinner scene at 50 minutes in is noticeably softer).

Universal’s DTS-HD 5.1 mix suffers from some equalization issues, pushing gunfire at high volume in comparison to audible dialogue. Those lucky enough not to worry about volume levels will undoubtedly enjoy the pounding, bass-filled gunfire. Bullets ricochet off their targets, and envelope the surrounds and stereo channels.

The finale is an audio powerhouse, with roaring flames taking hold of the LFE channel, and panicked screams coming from the surrounds. Gunfire is dominant here as well.

Dialogue scenes are typically flat with zero ambient audio, keeping the audience focused on the words, not random sound cues. Whereas other films may have mild chatter in the rear channels during a dinner scene, Basterds is quiet, even eerily so, creating a tense focus on the characters. This is intentional, not to mention appropriate.

The extras menu begins with three deleted scenes that run over 11 minutes, not surprising coming from Tarantino. The film-within-a-film, Nation’s Pride, is presented in its entirety (six minutes), although only in standard definition despite clips on the disc elsewhere in a mock making-of shown in HD.

A somewhat dry half hour interview with Brad Pitt and Tarantino is helmed by Elvis Mitchell. The Original Glorious Basterds is a brief featurette on the original, and its influences. Two interviews with Rod Taylor (who played Winston Churchill) probably should have been combined. Brief footage from Tarantino’s film clapper is amusing, as are a compilation of clips created to say “hi” to the editor. A tour/explanation of the posters used in the film (along with a still gallery) are followed by a trivia game, D-Box support, trailers, and typical BD-Live support.