There is an issue with Michael Mann’s insistence on using handheld, digital cameras to shoot much of Public Enemies. There is a weird, fourth wall breakdown as John Dillinger (Johnny Depp) breaks out of prison where Dillinger is walking, while the camera moves back to follow him.

There are moments where this style pays off, including numerous off-angle shots that are entirely unique to Public Enemies. Unfortunately, the pay-off is minimal, and the camerawork makes it seem as if you’re watching a cheaply made TV special on The History Channel than a $100 million dollar movie. Action scenes feel more like a featurette on how they were filmed, not an engrossing finished product.

All of the work, time, and research spent placing Public Enemies into the time period is wasted when the digital nature of the movie is revealed as well. Video noise does not suit the time period, but film grain would.

Dillinger here is lively, cocky, and brazen. The final 20 minutes are the strongest, beginning with a brash maneuver as Dillinger walks into a Chicago Police Station and briefly chats with the very people who are assigned to look for him.

Leading to that scene is a harsh interrogation, one in which Billie Frechette (Marion Cotillard) is assaulted mercilessly, until Melvin Purvis (Christian Bale) saves her. Purvis is disciplined and determined as the FBI head, but is focused on Dillinger. His “rescue” of Frechette is a powerful piece of character development, a man who previously was willing to go to any lengths to gain information, including killing all of Dillinger’s men.

Dillinger was an anti-hero to many. Public Enemies portrays Dillinger openly, allowing the viewer to create their own thoughts and opinions, at least until his death. Here, the slow moving, dramatic music and claustrophobic camerawork is forcing popular opinion, and dilutes what was an otherwise open interpretation. Mann lets his feelings be known, but it’s a shame there is no room for the opinion of others. 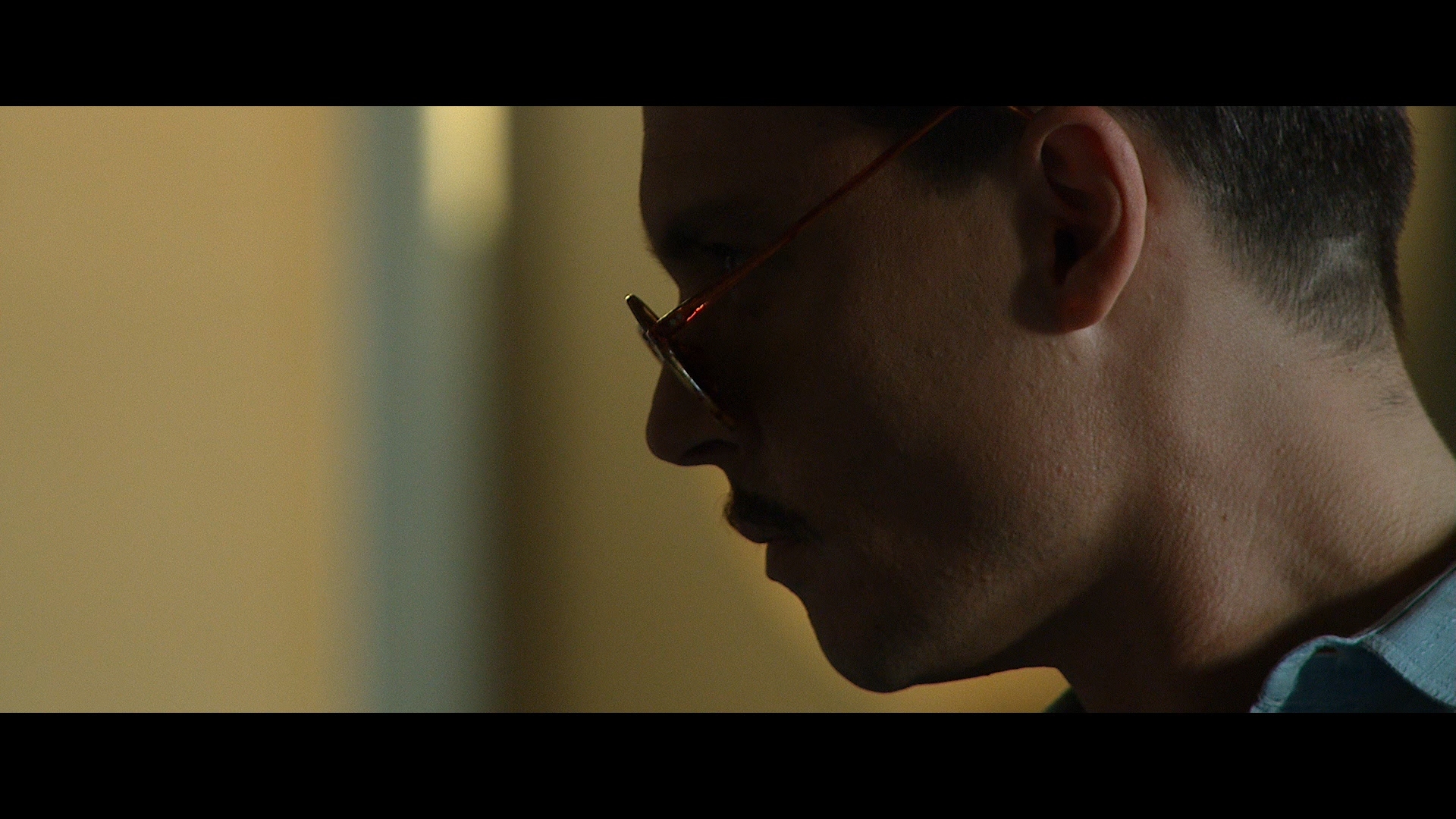 To begin dissecting this VC-1 effort from Universal, you need to begin discussing the final frames, which is a brief conversation with Frechette. This was obviously shot on film, with a natural, clean grain structure. Sharpness is perfect, detail is outstanding, depth is remarkable, and colors are beautifully saturated. Sporadic scenes during the movie share these qualities, often inter-cut with digital photography.

That digital photography is what causes the majority of this transfer’s issues, although these are representative of the source. Striped suits, hats, and hair are a nightmare, causing significant flickering. Ringing is notable throughout and generally consistent. Artifacting is routinely a problem, although not as noticeable as the other complaints.

Noise can be unbearable, particularly during the nighttime forest shoot-out and a hotel invasion. In fact, a dead, white pixel shows up during the latter. Some of the digital shots show excellent facial detail, while others appear processed and flat. Flesh tones vary, but usually accurate. Black levels are consistently deep, with minimal crush noted in a few scenes. A chase through an orchard as Purvis chases Pretty Boy Flloyd is almost impossible to view due the total collapse of detail and ringing on the trees.

Like Mann’s Miami Vice, this is a transfer that opens up debate as to whether crisp detail is more important that accuracy. In Vice, video noise was enhanced and added to create a gritty look, but at the same time, zapped all detail from the frame. Public Enemies provides that same forum for discussion, although how to score it is something else entirely.

As with the video, the audio has its odd quirks, likely part of the source. Equalization is poor, with some dialogue registering unintelligible if you have the audio at an acceptable level for the action. Also, it seems as if little ADR was done, leaving some conversations muffled. This is one you need to tinker with as it plays.

Gunfire either provides a powerful, deep low-end jolt, or sounds as if the guns were recorded live on the set. Train engines offer incredible, clean bass, but also come through absurdly loud. There is no consistency with this DTS-HD mix.

Street level ambiance is generally immersive, with cars and light chatter audible in the surrounds. As expected, gunfire also lights up the rears, and shattering glass flows through the speakers with a crisp high end. The stereo channels are generally well separated, if not noticeably so during heavy action. Bank alarms give off a fine surround presence as well.

Universal begins the extras with a commentary from Michael Mann, followed by a string of five featurettes totaling around an hour of content. The usual making-of piece provides the most useful insight into the creation of the film, while On Dillinger’s Trail is unique in that it highlights the locations the real Dillinger utilized (and some scenes were shot in). A feature on the guns, the battle between Purvis & Dillinger, and the legend Dillinger left behind round off the featurettes.

U-Control offers an in-movie timeline and picture-in-picture featurettes which are thankfully easy to access from the menu without having to watch the entire movie to see them. A trivia game will appeal to fans of Universal’s gangster movies, while generic BD-Live access and D-Box support remain.