For as dark as these Harry Potter film adaptations are becoming, they are still not afraid to laugh. Harry (Daniel Radcliffe) and Ron (Rupert Grint) remain light-hearted friends, wrestling over the better of two potion textbooks when they arrive late to class. Ron also becomes affected by a love potion, which is aided by a priceless, endearing performance on the part of Grint. Minerva (Maggie Smith) wonders why when something happens, “it’s always you three,” referring to the key cast.

Director David Yates and screenwriter Steve Kloves also handle the turbulence of fading adolescence, Yates in particular crafting a moving scene as Hermione (Emma Watson) finds Ron dating someone else. She sits at the bottom of the staircase, with Harry consoling here, the limited light brilliantly casting a dim shadow on the scene. These are no longer the kids audiences were introduced to in The Sorcerer’s Stone, but young adults, and each subsequent film has handled their age flawlessly.

Half-Blood Prince has the most to accomplish in this regard, dealing with a complex series of romances, teen awkwardness, and rejection. The base for the next film(s) is in place, where chaos will be the order of the day.

Half-Blood Prince is undoubtedly the darkest of the films to date, focusing on tense, concentrated action. A bathroom magic struggle between Harry and Malfoy (Tom Felton) is particularly brutal, and is done without a piece of the film’s score. The tension is derived purely from the visuals, a chaotic, jumpy style that seems to represent Harry beginning to lose control of the situation, vastly different from the previous films.

The same can’t be said for a visually familiar Quidditch game, of which the series seems to be struggling to keep relevant, despite being absent (with good reason) in the previous two films. Featured in Half-Blood Prince, the game is kept short, purely to push Ron’s romance, but much of the magic has deteriorated.

Also, those who fail to keep a nearly encyclopedic knowledge of this franchise and its characters will likely struggle to keep up. Each new school year brings additional professors or characters, typically reserved for the background, into the forefront. Being slightly confused as a casual fan is to be expected, and it is not necessarily the fault of the writers either, who struggle to cram massive books into 150-minute time slot. Trying to bring viewers up to speed would be asking too much.

This sixth entry of this wondrous and engaging fantasy series does sit at a point where it doesn’t exist on its own, and will struggle with its identity in the future. More so than any other point in the series, this serves as a launching point. Half Blood-Prince does the least for this series beyond its tragic finale, but serves a purpose.

Despite its fresh take on conflict, Half-Blood Prince does not offer anything terribly memorable. Its purpose is to build, laying a foundation for The Deathly Hollows. Despite this and its own identity struggle, Half-Blood Prince admirably performs its duty, serving fans that critical character development that will be valuable in the future. 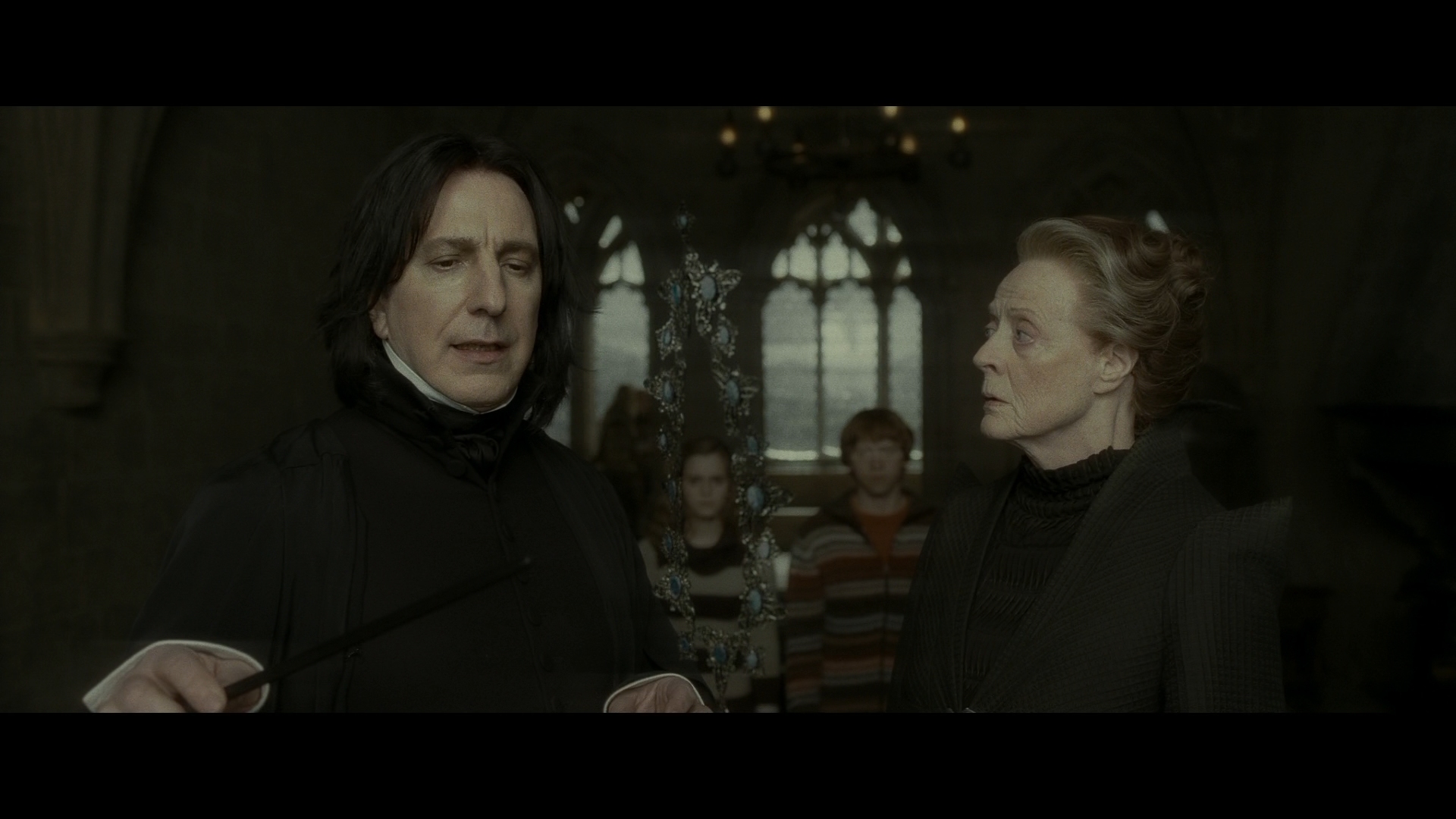 Warner’s VC-1 effort for this sequel is certainly questionable. Immediately apparent from the opening frames is a significant layer of artificial sharpening. Small levels of ringing are present in a variety of shots during every scene in the film. Grain levels appear to heightened slightly by the sharpening, and as a result, it can appear noisy with noticeable artifacting.

Brief moments of note begin at the 22-minute mark, a long shot of a passing train that completely dissolves into a mess of artifacting. One of the worst cases of this film’s digital appearance occurs at 47:47, where actress Jessie Caves’ face is nothing more than a series of pixels and aliasing. Cormac McLaggen’s face not long past the hour at the dance is also an artifact-riddled mess.

Flashback/memory sequences are intentionally softened, with blooming and color bleeding added as well. Still, the level of facial detail present in these scenes (almost none) is the case for the rest of the transfer as well. There is little definition present, with hair rarely defined cleanly, and subtle things such as pores barely coming through. Detail in backdrops, such as concrete bricks or vials of potions, are relatively clean.

There are some positives, including some excellent black levels, critical to maintaining the rather dire nature of the events in the film. Colors, including flesh tones, despite being subdued, reach an excellent level of saturation. Fire offers wonderful contrast, and the reds/oranges pop off the screen. Still, those are few positives, and for a modern film to look like this is nearly inexcusable. Previous trailers carried the same general look, so this may be something to do with the source, or (for whatever reason) intentional.

*Note: A few messages have been sent our way stating the movie carried a digital/processed look in theaters. This does not change the score, but it is important to some who may have noticed these same problems during its theatrical run. Unfortunately, a comparison is impossible to make now, but if this is the case (likely so), this Blu-ray transfer could be accurate to the source. Adjust the above depending on your tolerance or concern for source accuracy. Also, one edit was made to the video portion of the review regarding environmental detail.

Note #2: Something seems to be circling around various forums that the issue with this transfer is the dark look. This is not correct. In fact, Half-Blood Prince does a fantastic job of maintaining the grim nature of the film. While black levels are not super inky, they are maintained well.

All of the issues are with the digital nature, although where these come into play remains up for debate. This could have been a digital intermediate problem, this could be a source issue, or this could be a transfer issue. Regardless of where they come from, the notable ringing and artifacting remain on the disc. It is hard to imagine director intent including digital compression.

Note #3: This will hopefully be the final needed update. Other reviews are coming in stating there is no ringing or artifacting issues. As per DoBlu’s policy, a second look was in order. Halfway through a second viewing, there were enough instances of high contrast edge ringing, artifacting, and the other issues (plus those stated in the original review) that no more were needed. What follows are the time stamps where ringing/artificial sharpening/compression are evident, with notes for each. It should also be noted Harry’s glasses tend to show minor ringing throughout.

44:51: Severe artifacting notable on the left side of the frame, minor ringing on the posts to the right.

53:55: All three kids, dominant ringing on their neck lines.

54:07: Weird light bleed that makes characters look transparent, likely a source issue due to the photography, but worth noting for the curious.

1:12:42: A mess of a processed, artificially sharpened shot, particularly amongst the trees.

1:35:03: Severe flickering on the chest as the camera moves.

Thankfully, the TrueHD offering here is immersive enough to draw in viewers. From the start, which includes the Warner Bros. logo, this mix offers a powerful level of bass. Thunder accentuates the logo, and Bellatrix assault on the bridge is aided by the same low rumblings as it collapses. More importantly, it fits naturally into the mix, aiding it without becoming overpowering.

The surrounds carry a heavy presence, including superb score bleed. Every activity is aided by the surrounds, from a simple class to a magic duel. A cornfield chase is spectacular, with each stalk being pushed aside with perfect separation in all channels. The front stereo channels are widely spaced to include dialogue and ambient audio.

Extras begin on disc one with Maximum Movie Mode, a pop-up feature that tosses various sketches, behind-the-scenes pieces, and interviews at the viewer while they watch the movie. There are 13 focal points you can select without having to go through the entire movie, and these last a little over two minutes each on average. BD-Live connectivity allows you to replay the entire BD-Live chat with the cast and crew just as it aired live, a great touch.

Disc two is where things start thinning out as Warner undoubtedly saves loads of good stuff for the final “ultimate” box set when the series is finished. Close-up with the Cast is a series of short, rather weak featurettes focusing on a member of the cast and a specific part of the production that affected them. These run just under 30-minutes.

One Minute Drills asks the cast to recall or describe their characters in 60 seconds, sort of irrelevant to this specific movie, but still somewhat amusing. Those looking forward to the first Deathly Hallows footage will be disappointed with what they are given. The mini-trailer is merely a teaser.

J.K. Rowling: A Year in Her Life is a fantastic piece that follows the author as she finishes writing her story, although that have not read the final book are left out as spoilers are frequent. This runs for just under 50-minutes. What’s on Your Mind is a pointless piece with the cast as they are asked personal questions (likes/dislikes) and must answer quickly. A promo for the new Harry Potter ride is obviously a commercial, and eight additional scenes don’t even reach seven minutes.