Herein lies the issue with Terminator Salvation: It doesn’t need to exist. It neither expands the mythology or introduces any concepts that effect the previous films. What it does is blow things up… a lot. While probably not a record holder for explosions in a film, it’s the one lasting memory you’ll take away.

Action exists purely to exist in Salvation. In one scene, audiences are introduced to the Harvester, a towering metal monster, used to both kill and collect humans for a purpose never fully explained within the film. As humans make an escape attempt in vehicles, the Harvester spins around, shoots a laser, and blows them up.

When characters Kyle Reese (Anton Yelchin) and Marcus Wright (Sam Worthington) attempt the same escape, instead of firing a laser, the Harvester ejects two motorcycle-like machines from its legs. This leads to a five-minute chase sequence that is neither logical nor necessary.

Reese is critical to the plot, but in doing so, creates a flaw in the timeline. Reese is John Connor’s father. Without him, Connor (Christian Bale), the leader of the human resistance, wouldn’t exist. The machines track down Reese and capture him to lure Connor into the Skynet. Why not kill Reese the moment he’s captured? Why give John Connor the chance to infiltrate Skynet at all? Wouldn’t killing Reese eliminate Connor from the timeline?

Salvation’s future storyline opens with a complex action sequence, one that fails to explain characters or motivations, but hey, stuff blows up. That becomes an attitude that dominates the entire movie. It is a confusing start, although it does lead to an impressive shot of a helicopter crash that lasts a minute or two without an edit.

Fan service, from musical choices to one-liners, are everywhere. Yes, a digital Arnold does make an appearance in an overdone introduction usually reserved for rock stars on a concert stage, but it is admittedly worth a smile. Sadly, Danny Elfman’s score is sorely lacking, failing to deliver the themes fans expect or create new ones that are equally memorable.

Co-writers John Brancato and Michael Ferris helmed Terminator 3, although it is important to note they also gave the world Catwoman. Their contributions to the series have been little, and their concept of a machine who is still partially human leads to nothing other than a groan-inducing ending that stretches even Terminator believability.

There’s an issue with the war feeling small scale as well. While the resistance is scattered, they still have aircraft and vehicles to spare. All of the battles seem contained between a few humans and a handful of machines. Where is the intense stand off pitting numerous human soldiers against a machine armada? If you’re going to show the war for the first time, do not skirt the issue.

The latter is yet another issue with the film that questions why this story needed to be told. This is a side story, one better suited to TV or a mini-series on Fox. In fact, plotlines such as this would have been perfect if TV series Sarah Connor Chronicles was not cancelled. No, the massive $200 million fireworks wouldn’t be there, but they don’t need to be in the first place. 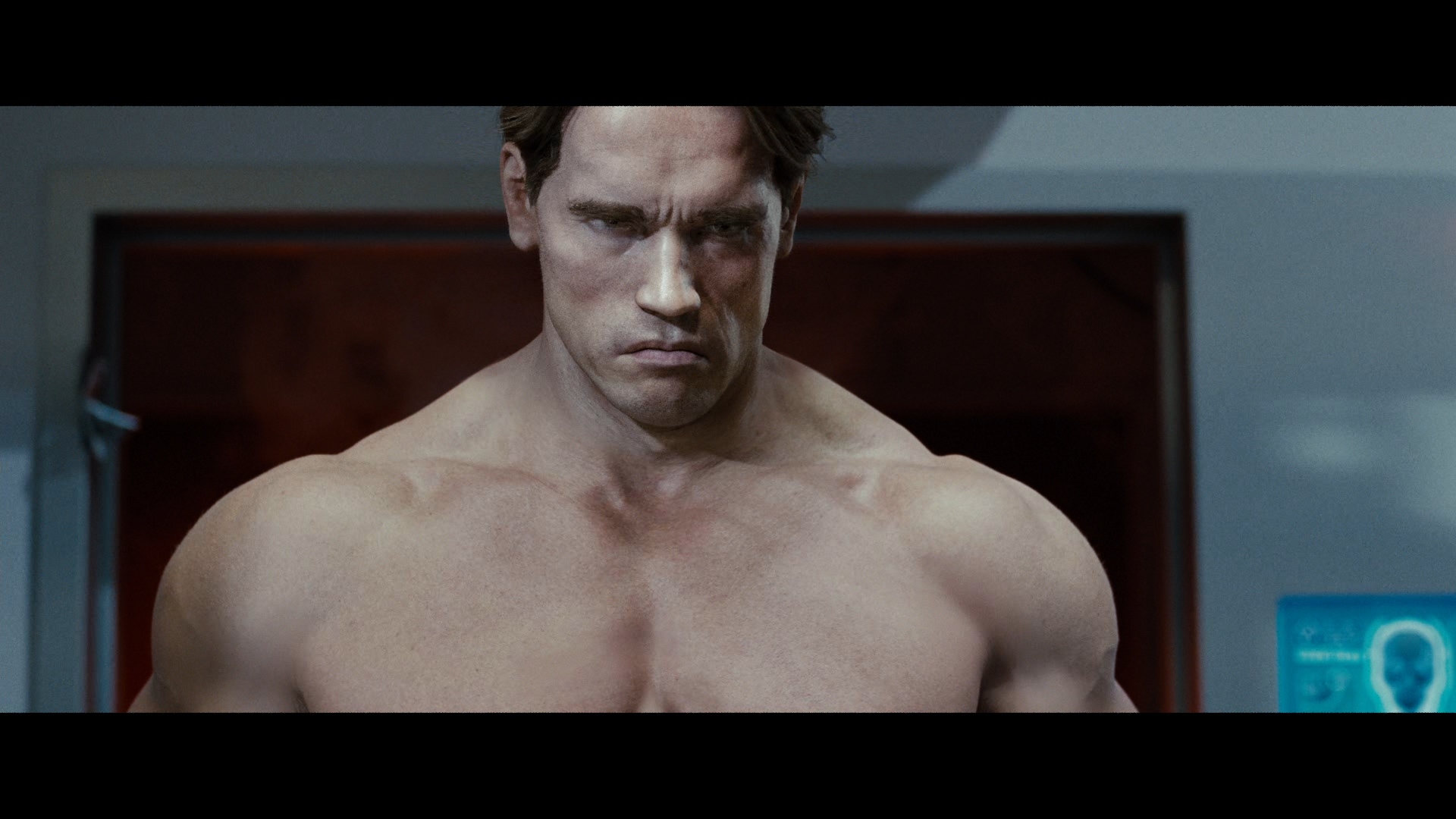 Unfortunately, Salvation dips in spots, significantly so the first time around the 33-minute marker. Faces are suddenly flat, and sharpness takes a hit. Some rather significant artifacting is notable at the 46 minutes, a shot from above as Marcus is getting out of the water. Noise is prevalent on multiple effect shots, particularly bothersome against the computer screens in the sub. Overall, these are quick-to-pass issues, but enough to drop it from perfection.

Thankfully, a powerful, booming DTS-HD mix does not, in anyway, disappoint. This is a loud, aggressive track, one with a constant stream of bullets and bass. The highlight is the giant Harvester bot sequence, its thundering footsteps setting off a storm of bass that is unquestionably clean and forceful. Lasers and bullets begin flying through the rear channels, while the spacious fronts are incredibly precise.

Ambient noise is exceptional, making the finale inside the Terminator factory a treat. Hissing pipes and sparks reach all areas of the soundfield, and rain is captured beautifully, a surround effect that is accurately pure. Engines roar and punches are brutal. This is an engaging presentation.

Split across three discs, Salvation contains the theatrical and slightly extended R-rated director’s cut, which should have been released to theaters. The third disc is a digital copy.

The theatrical version contains the best stuff, including Maximum Movie Mode which lets director McG walk onto the film to pause and discuss specific moments. Timelines, storyboards, and more are brought up. This also extends the running time about 10 minutes. “Focus Points” is a section of the disc that houses brief featurettes, 10 of them in total, all between two and three minutes each. These focus mostly on effects, with plenty of miniature footage.

Reforging the Future is a 19-minute feature that discusses McG’s vision, although it carries that blatant congratulatory tone that does nothing for the viewer. The MotoTerminator seems to be included just so Ducati could get some free advertising, focusing on the creation of these new SkyNet threats. The R-rated edition has BD-Live connectivity, which will be used for a live chat with McG December 5th.