Jackie Chan stands at the edge of a burning pile of steel. He is kicked onto the fire, and crawls across to get out of the flames. The stunt was performed without wires, the only protection given to Chan was some liquid on his clothes to prevent them from catching the brunt of the heat.

However, unsatisfied with how the stunt looked on camera, Chan re-did the take again, this time satisfied with the end result. That is how you master your craft, and while some will consider it dangerously stupid, it is exhilarating to watch.

The end result is what matters, and with limited budgets, Jackie Chan’s output of the 1990s was nothing short of sensational. As his stardom grew, so did his guts. The immense stunt work in Legend of Drunken Master is amongst the best of Chan’s resume. It involves not only himself, but numerous stunt doubles.

During a brawl inside a restaurant, an axe gang assaults Chan and his friend, leading to a hundred-man assault. The choreography is remarkable, the pinnacle being a fall through a straw roof to the ground in which safety is hardly the concern.

Legend of Drunken Master did not receive a US release until 2000, after Jackie Chan became a star thanks to Rush Hour. Even now, the film does not feel dated. Instead, it is refreshing, with proper edits and spectacular angles showcasing the talent of the performers.

Chan is aided by the comedic charm of Anita Mui, playing a supportive stepmother obsessed with Mahjong. Her colorful style and energetic personality add to a film lacking a base. The plot, concerning axe gangs, steel mills, ancient artifacts, and corrupt businessmen, is a convoluted mess saved by the martial arts skills.

If Jackie Chan was born to play any role, it is that of a drunk. His showcase here, a drunken fight in the middle of a market, is spectacular. Chan is capable of incredible motion, and the drunken style on display seems created to let Chan loose. No one can handle a bench like Jackie Chan. 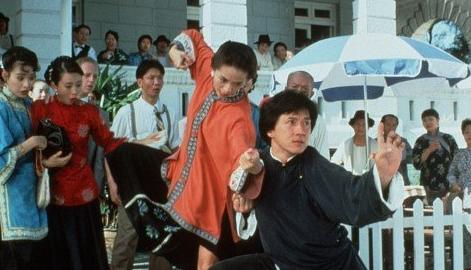 Drunken Master comes to Blu-ray in what seems to be an older master. This VC-1 encode suffers from a general flatness, lacking a bright contrast or deep blacks. Flesh tones are generally off-color, although tend to be stronger in the second half.

The print suffers from damage including specks and scratches. General softness dominates the film. Grain is rarely fine, but clumpy and unnatural. Some over-processing is evident, although light. High fidelity detail is non-existent.

One bright spot does exist, a mildly sharp brawl in the market as Jackie Chan first becomes drunk. Black levels and contrast spike, some marginal facial detail is evident, and the grain seems in control. It looks acceptable, certainly more so than the rest of the film.

Labeled TrueHD in the menu, the audio is actually mixed in DTS-HD. Regardless of the format, this is a clean, crisp audio effort. The surrounds have plenty to do, particularly in the steel mill. Fires flare up and clanging of metal is evident in all channels.

The stereo channels are wide and expansive, capturing action as it moves to the sides wonderfully. Positional dialogue is fun, while bass is provided by powerful punches and hard falls. The axe gang assault on the restaurant is also a wonderful piece of audio design as Chan whips a broken piece of bamboo around the screen. The audio suitably follows.

Sadly, the only available languages are dubbed. The original Cantonese is not included in any form.

The sole extra is a brief but excellent interview with Chan called Behind the Master. He discusses his style of filmmaking, the work that goes into it, and how Hong Kong filmmaking is different than American.