Ocean’s Eleven had a cast of criminals that swept through the three c’s: calm, cool, and collected. In Ocean’s Twelve, those aspects seem lost.

In fact, the characters don’t seem the same, not to mention a script that haphazardly re-introduces everyone before tossing key members in jail. The original let the ensemble cast play off each other as they built their plan for a heist in Vegas. Here, they play off each other in unrelated scenes, and the heist plans are nothing but.

Twelve lacks that dry, sly humor of the original, or at least the same amount of it. A wonderful conversation in a train station between Danny Ocean (George Clooney), Virgil Malloy (Casey Affleck), and Turk Malloy (Scott Caan) is one of the few scenes that delivers.

In fact, this is the film that wants to show off that all of the cast returns than tell a story. This is the longest movie of the trilogy, and those few extra minutes feel tacked on like an additional half hour.

Part of the problem may be that the heist is happening in the background, not in the front of the audience. The script by George Nolfi wants to be smart, and it is. It makes the characters utterly brilliant by the end when the audience realizes what the Ocean’s crew has accomplished. However, by doing so, it lacks the fun and humor.

As stated above, the characters always appear nervous or acting as if they know they’re in trouble. It does make some sense. Terry Benedict (Andy Garcia) is after the crew for the money they stole in the first film, but their trek through Europe seems standard fare for these professional thieves. Why do they show any signs of nervousness for such a (initially) small job?

Cap this small disaster with a bizarre finale in which Julia Roberts plays Julia Roberts (that makes zero sense), and Ocean’s Twelve falls victim to sequel syndrome. In fact, the film’s best piece of entertainment comes in the opening, as Don Cheadle is complaining about language being cut out of a song, and a phone rings to block his own inappropriate dialogue. After that, you’re in trouble. 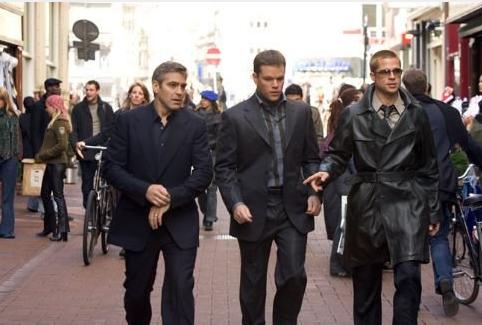 Steven Soderbergh really has an odd style, one that makes even the brightest stars in Hollywood look off. It also makes it hard to gauge this transfer, filled with orange flesh tones and constant noise, accurately.

Warner’s VC-1 encode can shine. The level of detail can vary, but when high delivers a spectacular image. Facial detail is outstanding. That said, it is hampered by severe black crush throughout, and in the third act, heavy blooming further dilutes what could have been a fine looking disc.

Some minor edging is visible on occasion, rarely a distraction. Or at least, not when compared to the noise, which also causes some compression issues on Brad Pitt’s face as he spies on ex-girlfriend and is illuminated by a red light.

Warner skimps on the hi-def audio, delivering a paltry Dolby Digital 5.1 mix. Dialogue is mixed a little low, but audible. Some light surround work creates mild ambiance on city streets and at an airport late in the film. The soundtrack barely bleeds into the rears, and the subwoofer isn’t given much to do. This is a center-loaded track that fails to please, but is adequate.

Director Steven Soderbergh and screenwriter George Nolfi join up for a commentary that doesn’t explain what happened to this sequel. A promotional HBO featurette performs as advertised, and 18 deleted scenes (all in standard def) run close to a half hour. A trailer remains.