The joy of Duplicity is watching Ray Koval (Clive Owen) work with – or even against – Claire Stanwick (Julia Roberts). They are two former government agents, MI6 and CIA respectively, now employed by rival corporations.

Together, they team up to take down one of the companies working on a secret product, the secret which they will then sell to a different firm for millions of dollars. Or at least, that is the plan.

It is a clever set up, and Koval and Stanwick are intriguing characters, more so because they are former lovers. Their relationship is anything but normal. They’re former training makes everything they say a game, and the participation of the audience requires a bit of thought.

Very little of what these characters do or say is truthful in anyway. The fun is figuring out what is a game, and what is honest. Even in the end, that may not be clear.

Tony Gilroy fills Duplicity with countless conversations between the characters, relishing the opportunity for them to face off. Given the caliber of talent on display, it was a wise choice. Owen and Roberts exude chemistry on-screen, acting with charm as they slyly work around each other to reach their goal.

Unfortunately, there is a story working behind them, that of corporate politics and sabotage. For the corporation’s plot to work and be comprehensible to the viewer, it requires numerous scenes that backtrack, creating a mess of confusion about what time-period these events are taking place.

Plot twists abound, Duplicity does seem to hold together during the big reveal, although certain questions and plot holes do exist when you piece it up after the film is over. The companies go a long way to damage the others reputation, although that is the joke. Understanding why they do it is clear. Understanding how they do it is not. 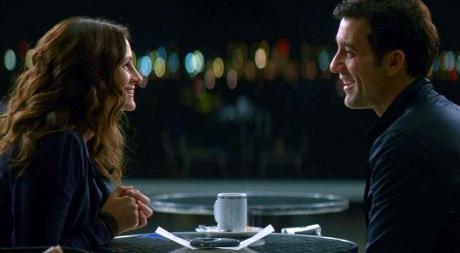 Duplicity comes to Blu-ray in a fine, clear VC-1 encode. Contrast is nicely put up against deep, rich black levels. Whites intentionally bloom during a trip to Miami, the only time they are out of control or washed out.

Flesh tones waver between natural and unnatural, although more often than not, they’re fine. Unobtrusive, minor ringing is briefly a problem during a speech delivered by Tom Wilkinson to his employees about his company’s upcoming secret reveal.

Sharpness is consistent, and detail is high with minor drops. Textures are clean and pure. Light film grain sits over the image, and no abusive digital processing has been applied.

Duplicity is dialogue driven, but still likes to show off. Ambiance is excellent, particularly as the characters move through New York. This DTS-HD mix is superb in following random traffic through the streets. Police cars are heard blaring sirens in all channels, and taxis honk their horns.

This all done without drowning out or overshadowing dialogue. A casino late in the film delivers the same immersive effect cleanly.

A commentary from writer/director Tony Gilroy and his brother/producer/editor John Gilroy is the only feature inside the extras menu. Generic BD-Live support takes the user to the usual splash page.