There is a scene in the Adventureland trailer in which Bill Hader runs through a door screaming at a park guest who threatens one of his employees. It is hilarious, and is meant to hammer home the comedy.

That is not the movie Adventureland is trying to be.

In fact, marketing for the film is terrible, making comparisons to director Greg Mottola’s Superbad, and Adventureland the furthest thing from it. Sure the film has some minor gross out humor, tends to utilize vomit regularly, and deals with teen sex awkwardness, but the heart of the film is somewhere else.

Adventureland tells the story of James Brennan (Jessie Eisenberg), a recent graduate forced to take a summer job to pay for his own graduation trip and college. The only job available to him is one at an amusement park, stacked with quirky people. He becomes attracted to a distressed Em Lewin (Kristen Stewart), and they begin an unstable, complex relationship.

It’s hard to categorize Adventureland, as it focuses on its drama as much as its comedy. Compared to the usual romantic comedy formula, Mottola’s latest takes a sharp turn away from the clichés (or at least most of them). Gone are throwaway characters that exist purely to take the highs and lows of a new relationship.

Replacing them are characters with depth, ones the audience can feel involved with. They have normal, real world problems outside of their relationships. The real world is something romantic comedies tend to forget. Adventureland embraces it.

This leads to slower pacing, breaking the mold and spreading jokes thin. You’ll laugh at Adventureland, particularly at Bill Hader and his eccentric attitude when it comes to running the park. However, the trailers and promotional material want the audience to believe this is going to be a laugh fest, and it’s not.

Sadly, despite a darker tone, the film cops out in the end and can’t free itself from the cliché. It asks the audience to become involved deeper as if it were building towards something emotional, but then takes the easy route out with an abrupt ending. It’s too simple, too predictable, and not worthy of what came before it.

Adventureland is not a movie for everybody. It breaks free from the colorful and carefree style romances in exchange for a darker, realistic side that many won’t be ready for. You latch onto these characters early, including their problems and their highs as if you knew them personally. That takes some talent to write. 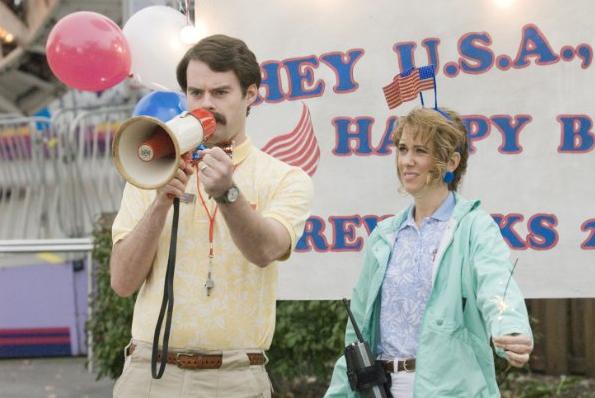 Disney/Miramax delivers a sharp, colorful AVC encode. The light layer of film grain is wonderful, giving the film texture. Noise is unfortunately dominating in low light, and a mild distraction. Deep, rich blacks do lead to some small crush, but outstanding detail still shows through. Faces show small amounts of stubble and pores, while clothing textures are consistently impressive. Sharpness is maintained regularly, at least after a troublesome opening close-up of Jesse Eisenberg.

A bright contrast brings out the image cleanly, without blooming. Flesh tones are accurate and consistent. There are no instances of edge enhancement or other unneeded processing. This is a wonderful encode.

The Adventureland park itself is lively in terms of audio. The DTS-HD encode handles light ambiance, including yells and music. Dialogue mixes well with the general noise level of the park. Bass is provided by a clean, clear fireworks display around halfway mark of the film. This is a subtle mix, but one that provides a pleasant, accurate atmosphere.

Writer/Director Greg Mottola and Jesse Eisenberg handle the commentary portion of the disc, and being a personal film for Mottola (it was based on his own job in an amusement park), it makes for easy, honest listening. The same goes for Just My Life, a short making-of featurette.