Teenage Mutant Ninja Turtles establishes the four mutated green heroes as individuals in their opening conversation with their master, a giant rat named Splinter. They have completed their first fight, saving a TV reporter April O’Neil (Judith Hoag), and come back to their sewer lair to let Splinter know the good news.

Raphael is angry he lost his weapon, yelling he can get it back. Leonardo is excited, but calms himself and speaks maturely about the events. Michelangelo is more concerned with ordering pizza, walking around with a phonebook as Leo speaks. Donatello is quiet, keeping to himself as the intelligent one.

That is impressive for a filmed aimed at children, one that pushes the Turtles on screen just over five minutes in. Things move quickly in Ninja Turtles, but it does so with care.

The film is dark, shot mostly in low light, with harsh, brutal fights. Raphael, angry at his brother, leaves April’s apartment to calm down on the roof. Here he is savagely beaten by numerous members of the Foot Clan, surely a distressing sight for any Turtle’s fan of the ‘90s.

Full credit goes to the infallible Jim Henson’s creature shop for some wonderful suit work, making that sequence believable. Not only are they detailed, but maneuverable, allowing the actors a wide range of movement. While their rubber nature does show on screen, it is not enough to pull the viewer from the film. Their animatronic heads are equally sharp and up to the task.

Despite the darker nature, much of the light-hearted nature of the cartoon show does come through. The Turtles dance to “Tequila,” watch cartoons, have a funeral for a destroyed pizza, and play a quick game of rock, paper, scissors to decide who fights their arch enemy Shredder. It lightens the tone to keep this familiar to children unaware of the darker origins of their heroes, but still maintain that edge that the earliest fans enjoyed.

If anything, the light humor leads to the film’s best moment. The Foot clan break into (literally) April’s apartment, and Michelangelo finds a soldier holding nunchucks, also Mikey’s personal weapon of choice.

He responds with the line, “A fellow ‘chucker hey?” before beginning a priceless routine that ends up with Michelangelo one-upping the nameless soldier. It enrages the Foot, beginning a fun brawl that perfectly captures the spirit of the Turtle’s persona in the ‘90s. It’s fun and dramatic as it should be. 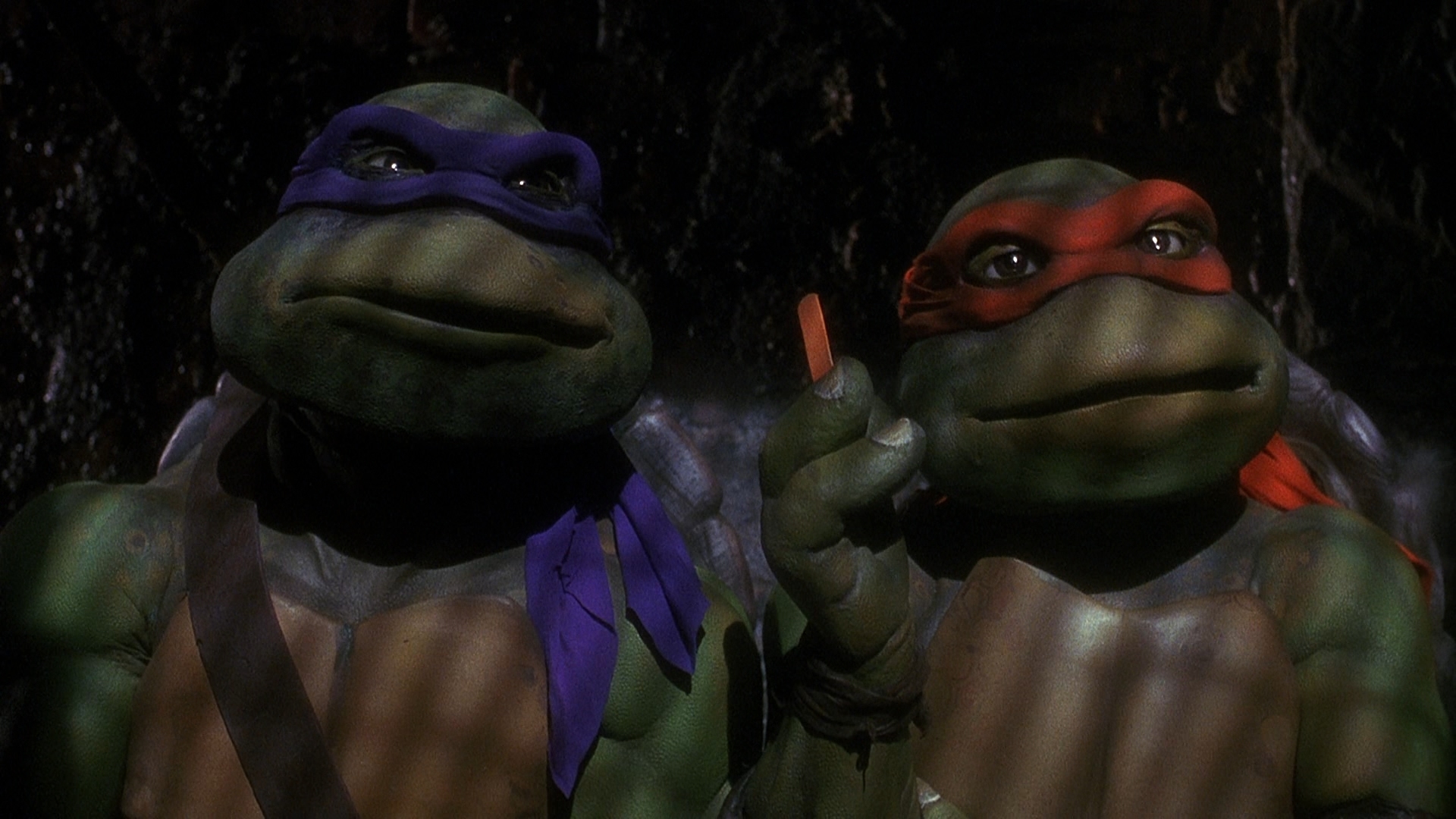 Being so dark leads to a Blu-ray transfer that is less than stunning, but still a worthwhile upgrade. There are details on the suits, individual scales if you will, that have never been apparent before on home video. Facial detail is sporadic, but noted.

The VC-1 codec has some trouble with a rather thick grain structure, appearing noisy and digital. Spikes are simply atrocious in terms of their obviously compressed nature. Black levels are excellent, particularly in the sewer lair. Color is somewhat muted given the intentionally low light, but still comes through. The overall look is somewhat soft, but only a few scenes contain edge enhancement (look at the railing as Casey Jones sits on the steps around the 39 minute marker).

It is also odd how the grain literally stops when the Turtles briefly move into April’s country home. All outdoor shots are free of grain, and look slightly processed. Why is anyone’s guess.

The film really comes alive with this TrueHD track. The score from John Du Prez has never been this clean, or even this audible. It used to be buried behind the action.

The surrounds, while obviously artificially pumped up, do sound great. The echoes in the sewer are superb, and nicely track Donatello as he skateboards through them. City ambience is excellent as Raphael leaves a movie, and the Foot headquarters is alive with activity. Punches deliver an adequate and satisfying low-end thump. This is a surprise to say the least.

Nothing but a trailer (with placeholder voices and music) and obviously non-gameplay promo footage for the upcoming Wii title TMNT Smash-Up exists in the extras menu.