Pelican Brief opens with the most varied selection of protestors ever caught on film. Gun control activists, non-gun control activists, abortion supporters, non-abortion supporters… they’re all there, screaming at a Supreme Court Justice. How any of the protestors expect to be heard is a mystery, but it is impressive at how well they seem to be getting along with each other, if not the local police.

The entire scene is one step above campy, although Pelican Brief descends into a messy chase about the 40 minute mark that does stoop to that level. Julia Roberts goes under attack from an assassin, who does his job with all of the subtlety of a killer from a slasher movie.

The story, that of the assassination of two Supreme Court Justices, is a clunky mess of a thriller, with one of the key characters absent for the entire first act of the film. Gray Grantham (Denzel Washington) is a reporter who believes a brief filed in regards to the murders by Darby Shaw (Roberts) has some merit. Grantham is left out of the film until needed, portraying the typical movie journalist who is stuck with an editor (John Lithgow) that does not believe he has a worthwhile story.

As it turns out, the plot happens to make it all the way to the president, who is played as an idiot by Robert Culp. This is a character more concerned about his dog in the oval office than any issues of the day. This is not the fault of Culp; he is simply handling the material as it is given to him.

Alan J. Pakula directs Pelican Brief well, including some wonderful tracking shots that tell the story of each murder. An effective chase inside a parking garage is notable, if not generic.

Oddly, the core of Pelican Brief is similar to Pakula’s earlier The Parallax View, in which a reporter investigates the assassination of a political target that leads him to believe a corporation is responsible. Stick with that 1974 minor classic. 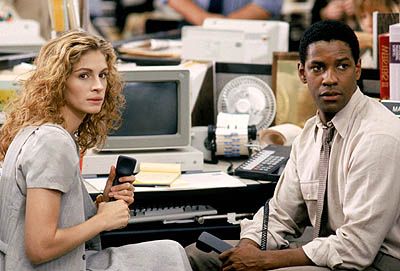 Brief comes to Blu-ray from Warner in a rather flat, lackluster encode. Much of the film carries an over processed look, possibly from a light application of DNR. Edge enhancement is noted early, and sporadically throughout. Smearing is a regular problem, further making the case for DNR. Artifacting is noted against a solid wall close the 15-minute marker.

Brightness and contrast are strong, although not enough to make up for lost detail. Denzel Washington’s face at the hour and forty-nine minute mark is near perfection, and sadly the only time that can be said of this presentation. Depth, detail, and sharpness are outstanding, and it becomes a mystery why the rest of the film fails to keep up.

A car explosion is example of this TrueHD tracks meager abilities. The high end is strained, and the low end almost non-existent. Oddly, the music by James Horner provides some excellent low end thumps. The subwoofer remains quiet otherwise. Surrounds come into play during a trip through Mardi Gras and another party sequence. This is dialogue driven otherwise.

Warner includes a theatrical trailer and nothing more.