The height of the jokes in Miss March comes early. Eugene Bell (Zach Cregger) is awoken from a four-year coma thanks to his friend Ticker Cleigh (Trevor Moore) hitting him in the face with a baseball bat. After stumbling around, realizing where he his, Eugene eviscerates his bowels all over the hospital floor in full view of the audience. That’s the most mature way to explain it, and the be all, end all of Miss March’s brand of “entertainment.”

Of course, Miss March isn’t done with that gag. No, the movie must then have a doctor come into the room to make various jokes about it, and throughout the film, Eugene continually loses control during awkward moments, the only way the writers (also Cregger and Moore) could think of to find a way out of situations. It also becomes the last joke of the movie.

Immature comedy has a place, and if handled with at least a modicum of skill, it can be light-hearted entertainment.

Miss March is not only disgusting, but cheap and merit-less. It offers nothing of value, and characters are offensive because they’re expected to be entertaining because of who they are. It doesn’t work that way.

These two goofballs set off cross-country so Eugene can be reunited with his high school sweetheart who apparently left him in a coma to pose for Playboy. The threadbare plot includes enraged firemen, an ex-girlfriend, and a rapper who is supposed to be funny for reasons lost on the cinema enthusiast. The goal of Miss March seems to be to degrade itself further as if knows the earlier jokes didn’t work. The film reeks of desperation. 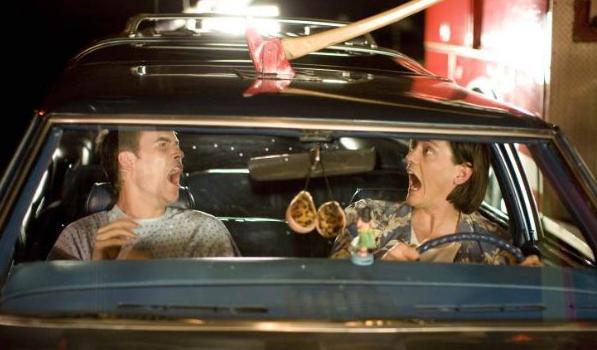 Miss March comes to Blu-ray in a high bit-rate encode, but that means little. Detail is flat, and faces are slightly smeared. This was shot on film and doesn’t look like it. Noise is a regular problem, and artificial sharpening causes a variety of problems. Hair unnaturally flickers and rooftops do the same.

Colors are well saturated and bright. Black levels are fair to great, although depth suffers significantly when they are off. Sharpness is likewise inconsistent. This is a marginal improvement over DVD, undoubtedly due to some unnecessary processing.

A DTS-HD encode takes hold of the subwoofer during a few scenes that feature music, particularly one inside a limo. The low end rocks with every beat. Surrounds are slightly engaged without the immersive effect of better discs on the market during party scenes. Some light tracking front to back is evident as cars pass through the sound field.

Five viral videos offer a laugh or two, certainly more so than the movie itself. They run close to 14 minutes in total. A two-minute clip titled (seriously) Down and Dirty with Horsedick.mpeg is a mock piece on the Craig Robison character. Undoubtedly, just stating his name will draw people to this website looking for something we will not be providing.