More specifically, one called The Love Guru — a film so childish, so low-brow, so disgusting, and so offensive… it’s freakin’ funny. It’s hard to imagine what anyone could possibly expect beyond that when walking into a movie starring Myers post-Austin Powers.

In fact, Love Guru is so low-brow, a critic recommending it could very well be putting his  career on the line. So be it. The story of a self-proclaimed love guru trying desperately to gain a spot on Oprah by hooking up a hockey player with his former wife is funny. It makes you laugh at its absurdities, regardless of how low it goes.

Die-hard hockey fans will probably be horribly offended at how the sport is treated here. Despite not even following the rules of the NHL, desecrating game seven of the finals with such a heinous act of elephant sex will probably be the end of it for those people. Never even mind the Hindus who raised such a fuss over Myer’s character.

It’s actually staggering that this film ever managed to snag a PG-13 rating from the MPAA. A penis is represented twice on screen in graphic detail. Whether for comic purposes or not, making a studio cut this sort of thing for a specific rating is the type of thing the MPAA seems to live for.

Despite Myers, Verne Troyer, and Jessica Alba, the show stealer here is Justin Timberlake. He plays Los Angeles Kings goalie Jacques “La Coq” Grande (which, yes, sounds like you think). He’s known for being well endowed, and Timberlake runs with the concept. Oh, and Canadians should be mortified at his portrayal, including his dining choices like the Quebec pizza. If a few must go down for a few laughs though, then that’s what has to happen.

Sometimes, people just need to relax and let a movie work its immature magic. Sure, no one is going to consider piss-mops to be high art, and then again, no one should. This hilarious, off-color farce nails the laughs, and that’s all that matters. Mariska Hargitay. 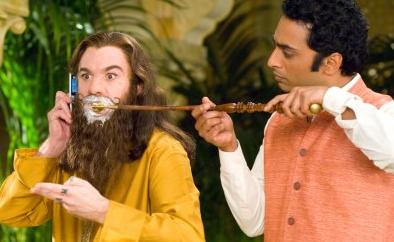 As expected for a new release, Love Guru looks great on Blu-ray. Primary colors burst off the screen, and the sharpness is outstanding. Unfortunately, due to an overblown contrast, a lot of detail ends up being washed out. The transfer comes off flat, despite the black levels remaining rock solid.

For a TrueHD track, the disc is mixed incredibly low. Be prepared to turn the volume up well past your usual settings. Even at that level, the mix is entirely front-loaded. Even during the crowded arena scenes, there is no activity in the rears. The soundtrack provides a bit of bass, although it’s hardly enough to give the sub a workout.

A series of featurettes focus on the making of the film, and run about 25 minutes total. One in particular focuses on the special effects, and it literally divulges every possible detail. Around 13 minutes of deleted scenes include an alternate ending that’s not worth much. Three different sets of outtakes, ad libs, and alternate takes add up to about 18 minutes of content. There’s some funny content in here.