At 38 minutes into Coraline, the title character walks into a circus tent. There, a collection of musically talented mice perform a circus act, one that could be one of the most startling, jaw dropping animated sequences in the history of stop motion animation.

Every mouse moves, turns, and dances to the music, making the choreography look effortless, although knowing how the form works, that was certainly not the case. Special features indicated up to 61 mice were used at once during the scene, undeniably a stunning achievement.

Coraline is wonderfully inventive in its use of stop motion, and thankfully reassures audiences there is life left in this dying art. Camera angles use first person viewpoints, long shots that show the immense depth of the miniature sets, and is incredibly gutsy when it comes to animating typically forbidden objects such as water, cloth, and hair. The few precious seconds those items are on screen become a nightmare for the animator, but bliss for the informed audience.

Coraline is of course spectacle, but does not lose sight of its goal which is telling a story about a young girl who feels neglected by her parents. She escapes into an alternate world where her “other parents” live, complete with button eyes and colorful, tasty food. The “other” world is too perfect, too clean compared to her run down, beat up home.

The script presents Coraline as smart, quick thinking, and brave. Her upbringing, or even lack thereof, has not dimmed her views towards her parents. The film does not dumb down or shy away from the dark and creepy. It chooses to treat children like adults and not talk down to them due to their age. It challenges them to process what they see, and think about how the flaws in their own lives are necessary. Coraline is wonderfully refreshing.

Director Henry Selick is known for his bizarre images having helmed Nightmare Before Christmas and James and the Giant Peach previously. He also has an obvious appreciation for the art of stop motion, a medium unlike computer generated images that makes you question how things were done. The thought process shows on screen, coming through in the character’s expressions and subtle movements.

Coraline uses colors in ways that resemble Selick’s previous work. Halloween Town in Nightmare was grim, full of eerie grays and browns. Coraline’s home is similarly run down. Likewise, the alternate world in both films is bright and colorful. The difference between the two is the “other” world in Coraline maintains its color despite the increase in disgusting, ugly creations. Color is only lost when Coraline shows her ingenuity and fights back, sapping the evil energy that generated it.

The film contains a vast array of original concepts and ideas, ones that will sadly be overlooked due to the overwhelming popularity of Pixar and Dreamworks come awards time. While it is impossible to question the talent that creates the latter studios films, they fail to meet the purity of the human touch that only stop motion and Coraline can produce. 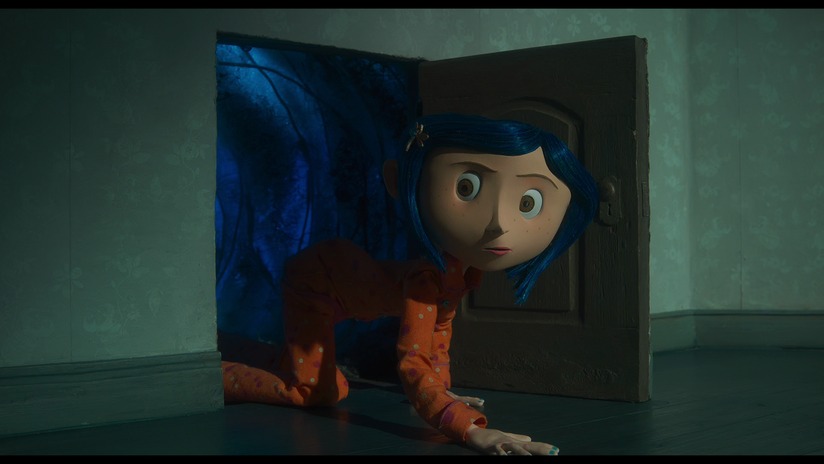 Universal delivers a truly beautiful VC-1 encode for this Blu-ray release. Clarity and sharpness are remarkable, with a crispness that only top-tier hi-def discs provide. Details, from those in the miniature sets to the stitching of the clothes, are stunningly presented. Colors, where needed, are rich, bold, and wonderfully saturated.

Coraline’s black levels seem inconsistent, although it has more to do with a subdued color palette. Depth is still generated within the image even if they appear slightly gray, although some minor noise is evident in some scenes within the outdoor environment. This is a barely noticeable flaw. The purity of the contrast is consistent.

Universal includes a 3-D version on the disc, the green/magenta style that saps the film of its luminescent colors. The gained effect is minimal at best, certainly not comparable to what was seen in theaters, and is impossible to actually score.

A DTS-HD encode is powerful, resonating powerfully on the low end during an early thunderstorm. Likewise, during the finale as the other mother becomes trapped, she begins pounding on a door that lights up the subwoofer with amazingly clear thumps.

Surrounds are engaged throughout the film, from insects flying through the soundfield, positional objects being thrown around, or the wonderful Bruno Coulais score. Not a single cue is missed or misplaced.

Henry Selick brings composer Bruno Coulais with him on a commentary track, kicking off a fine set of extras. A selection of deleted scenes (mostly finished) includes annoyingly edited introductions from Selick. A making of is split into 10 segments, and runs for a bit over a half hour. Two extra featurettes, one on voicing the characters and another on the creepy factor of the film, should have been included in the making of. All of them offer solid insight, despite the usual round of (deserved) self-congratulation.

Universal’s usually annoying U-Control offers three different tracks, including picture-in-picture animatics, behind the scenes of certain segments, while the third focuses on the voice work. These are still a pain to watch considering you would need to watch each scene three times to see it all. BD-Live support includes a downloadable featurette on Henry Selick, and the disc supports D-Box. Finally, the Blu-ray comes packaged with a standard DVD and digital copy.