A fun kid’s adventure, Ant Bully was a quickly forgotten 2006 film, ignored largely due to its concept of CG insects, and Pixar this is not. Taken on its own, it is a colorful and imaginative affair that’s bound to captivate the target audience while harmless for adults (and fans of the book it was based on).

John Davis, who previously handled the underrated Jimmy Neutron movie, directs this story of a boy shrunk down to ant size. He is forced to accept this punishment for his attempts to destroy the colony when he was full human height. The messages are clear, including teamwork and thinking of other people. On a side note, it is going to be hard for parents who might have an insect problem in their home to ever call an exterminator with Ant Bully and Over the Hedge, but the underlying lesson remains positive.

Bully gains a few early respect points with a subtle reference to sci-fi classic Them!, then becomes an energetic adventure. Action is lively and on a large scale, at least in terms of ants. Some mild adult humor hardly push this into PG territory, and kids will have plenty of laughs on their level to keep them glued to the screen while smiling.

Some of the ant peril aspects have been ripped directly from a growing line of insect-based animated features. A water attack is highly similar to the rain sequence from Pixar’s A Bug’s Life. The character design is likewise highly reminiscent (and close to Antz as well), though few of the characters in Ant Bully are anywhere near as memorable.

Bruce Campbell voices the goofy, rather dumb ant Fugax and becomes the most likely connection with kids aside from the human lead. Nicolas Cage seems to be sleeping through the roll, his voice sounding more like a bored teenager than any high-end magic crafting ant.

Sure, Ant Bully actually uses the aunt/ant joke, but it recovers quickly heading into a lively finale, that a battle against an exterminator (Paul Giamatti) determined to clean the front yard of insects. It’s hard to not have fun watching a sequence like that. 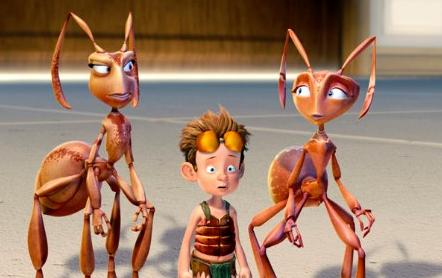 Ant Bully shares the same encode as the HD DVD release. That’s fine, as this is an excellent encode with only minor problems.

Black levels initially appear flat, an intentional effect for the full-grown human environment. Muted colors likewise disappear once inside the ants home, the exact point where this transfer brings in the “wow” factor. Detail is only limited to the animation. Sharpness is perfect, and the black levels are wonderfully rich and bold. It is an encode that achieves that rare three-dimensional effect so many fail to do.

Sadly, this VC-1 transfer falters a bit when it comes to the backgrounds. Banding is an issue from the 51:20 mark on. The sky doesn’t hold together. A relatively low bit rate encode (dropping as low as 3.8 MBPS) probably doesn’t help. While it may not achieve hi-def perfection, it barely misses the mark.

Warner unfortunately uses a compressed 5.1 mix that delivers on most counts, if not as clear as it should be. Bass is mild, and not as clean as the best discs on the market. The surrounds are nicely used in all action scenes, and a fine echo reverberates through the ant nest. Directionality is solid is slightly unspectacular. The finale is the showcase, with wasps buzzing through all channels as they fly to their target.

It Takes a Colony is a making-of that aims young, although it is nice to see director John Davis address other bug-based animated films. A stack of deleted scenes run over 11 minutes, including a birth sequence that could have worked if it were shorter. Some animation gags, including one about The Matrix, might draw a smile. A selection of promotional shorts and a terribly boring screen saver finish this one off.