Instead of discussing 12 Rounds, a movie that offers little to discuss, let’s focus on why this movie was made. John Cena is the latest in a line of WWE wrestling stars to begin breaking out into the mainstream. Like Dwayne Johnson/The Rock before him, he has charisma, looks good on screen, and has potential mass-market appeal.

His previous film, The Marine didn’t break Cena out into the world, but undoubtedly made a steady profit from his fans. Filming another movie, this a direct rip-off of Die Hard 3, gives the WWE a second chance to break out their up and coming media darling to the masses, in turn bringing fans into live events around the country.

This time though Cena has in tow director Renny Harlin. It’s ironic he helms this one as he directed the weakest film of the Die Hard series, Die Hard 2. As this is a near remake of the third film in that series, one has to wonder if he took the project purely to show the world what his version of that film would have been.

Sadly, 12 Rounds is missing the charm, charisma, and energy of that franchise. Actually, take that back. It has energy, but so much that the constant crashes and hilariously awful set-ups fail to respond to the potential.

Instead, the energy is wasted on an impossibly nauseating shaky cam, a soundtrack that literally stops for five minutes the entire movie, and an opening sequence that lasts over 22 minutes purely to set up this inane plot.

So yes, as in Die Hard 3, a man in this case named Miles Jackson (Aidan Gillen) wants revenge against a cop, in this case Danny Fisher (Cena). He does so by setting up traps – implausible, impossible traps – to keep Cena on the run and save the city of New Orelans from total destruction.

Dialogue is inept, such as the opening sequence where the FBI operator details all of Jackson’s accomplishments in the world of crime to the undercover agents following him at street level. Either they took the job without knowing what Jackson did in the past, or the writer Daniel Kunka couldn’t come up with the better scenario to deliver the same information. Bet on the latter.

This leads to a number of action sequences, including an admittedly fun fire truck chase through the city leading to thousands, if not millions of dollars in insurance claims. Of course, before that, Cena must run into a burning building to find a clue and you half expect to see a graphic pop-up on the screen that says, “John Cena: Fireman – The Series.”

The inevitable finale occurs as you would expect, with Cena saving the day after jumping off a roof onto a helicopter to confront Jackson, leading to his sure fire action movie death. At one point early in the film, a character states, “I am definitely not smarter than a fifth grader.” You might be, but this movie isn’t. 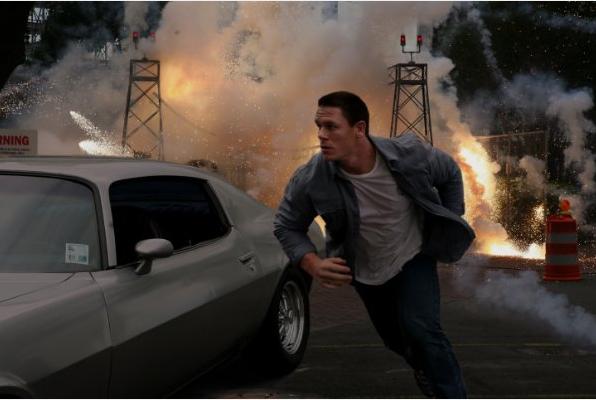 12 Rounds comes to Blu-ray in a beautifully saturated, heavily detailed AVC encode. Sharpness is excellent, with rich blacks delivering intense depth throughout. Explosions are gorgeous with their bright orange hues bursting from the screen.

The film does suffer from sporadic noise, including a night shot early of a bridge. Contrast is also an issue, undoubtedly part of the source, but it significantly wipes detail from the frame when it blows out. It runs hot consistently, an unfortunate choice that keeps this disc from maintaining the finer points of the best live action discs.

Thankfully, such tinkering is not an issue with this powerful DTS-HD Master mix. Bass is deep, strong, and forceful, rattling rooms with gunfire, car crashes, and explosions. It exhibits stunning range, making each of those acts unique at different volumes.

Surrounds handle a multitude of audio, from gunfire, to debris, to crashing cars. Accuracy is impressive, and while the film has little downtime, ambient audio is noted on the city streets.

Two commentaries, because apparently someone found this necessary, are included. Renny Harlin takes over the first, with John Cena and writer Daniel Kunka helming the second. Around an hour of featurettes follow, although most are there to promote. The best details the work on the streetcar sequence, and how the main strip of New Orleans had to be shut down to film it.

An fun interview with Cena interviewing Harlin (and vice versa) runs only a few minutes, making it nearly as fun as two viral videos that are worth your time. Two alternate endings carry two commentaries each. Also note the disc holds an unrated cut of the film that is two minutes longer. It is unspecified what is new, although two f-bombs may be part of the source.