From the moment King Arthur starts, you know Jerry Bruckheimer had a hand in it. Despite a fresh take on the legend, one that is supposedly realistic, the film in this director’s cut form is overlong and glossy, clashing with the atmospheric direction of Antoine Fuqua.

Clive Owen stars at the fabled King Arthur, enthusiastically portraying the legend as a hardened leader who wants nothing more than his knights to return home alive. Their final mission, to escort some of the last Roman leaders and his family safely out of harms way, is taken grudgingly, and the film progresses Arthur nicely via the set-up.

A strong supporting cast, including Ioan Gruffodd as Lancelot and Keira Knightley as Guinevere, are well developed. Ray Winstone and Ray Stevenson are wonderful as the muscle of the group, bashing in enemy faces mercilessly.

Sadly, when the film finishes on an extended battle sequence, it’s all too familiar. The concept of setting the legend in reality is forgotten, with a volley of arrows managing to hit their target despite no line of sight and smoke fogging the terrain. Gory kills are appropriate, constant, and tiring. If you’ve seen one head sliced off, you’ve seen them all.

King Arthur further degenerates with the predictable climax in which of course Arthur must meet his foe one-on-one in an elongated fight in which none of the extras seem to notice an easy opportunity to secure the battle for their side. It’s been done, extending an already long film past the breaking point.

An earlier action sequence, one on a thin sheet of ice, works better. Not only does it lead to an emotional send-off for one of the key characters, it’s visually unique and exciting, something that can’t be said for the finale. 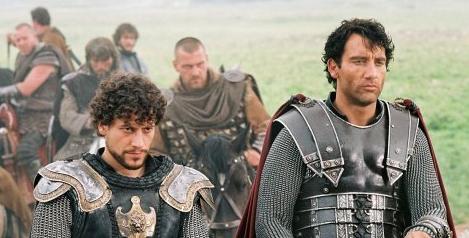 King Arthur is not the high end video demo disc you would (and should) expect. It’s a garish, ugly looking transfer, with neon flesh tones, bleeding greens, and oversaturated reds. Banding is evident on faces, black crush is a regular problem, and the complexity of chain mail causes shimmering. Grain is left intact with little effect.

Fine details are sporadic, coming through nicely in extreme close-ups, and forgotten elsewhere. The contrast is oddly dimmed, yet still manages to bloom slightly. There’s also an overprocessed look to the proceedings, a thought given some life thanks to the highly annoying edge enhancement on nearly all long shots. There’s one moment, a conversation between Arthur and Guinevere at the one and a half hour mark that seems free of almost all of these problems. It’s brief sample of how this should have looked.

The uncompressed PCM mix is almost enough to make Disney’s “Movie Showcase” included here worthwhile. Bass is wonderfully rich and deep, coming through cleanly during battles or when horses run. Swords clash beautifully in all channels, with crisp highs that sound incredibly natural. Tracking is wonderful, and even non-action scenes include some fun ambience, whether it’s howling winds or howling wolves.

Extras flatline, beginning with a commentary from director Antoine Fuqua. You’ll follow that up with a promotional making of that runs 17 minutes, a dry filmmakers roundtable with the cast and crew discussing the film, and an alternate ending with optional commentary. A mildly fun trivia track runs along with the film, and a photo gallery can be selected as well.

Two other things of note are that the disc only includes the director’s cut. It removes a few moments of the theatrical version, while adding in more gore and additional dialogue. Secondly, scenes not spoken in English are for whatever reason not subtitled. You’ll need to turn on the full English subtitles to see what’s being said.