At the heart of the film is Freddie Highmore. He plays dual roles here, cast as twin brothers in amazingly convincing fashion. If you didn’t know, you wouldn’t even be able to tell it’s the same kid.

It’s important to the film, as the twins have distinct personalities that are necessary to convey when a book is opened revealing a world of odd creatures living among us. As it turns out, this book is valuable to an evil troll who’s been after it for some time. The kids become trapped in the middle of a world within a world, the performances making this engaging and entertaining throughout.

Spiderwick is loaded with action, but it never intrudes on the story. There’s a leap of faith on the part of the screenwriters that the audience will simply accept what they see on screen. It’s likely the book goes into further detail, though what’s here is enough to get by. Given the dearth of family oriented fantasy worlds out there, expecting someone to take on another set of goblins and trolls isn’t asking much.

Creature designs are all around excellent, as are the visual effects. They create a creepy and intense atmosphere that sits firmly within the PG rating. Some of the action gets surprisingly violent (burning the faces of trolls off with their one weakness), and makes up for some of the repetition in the story. Audiences are constantly reminded that evil Mulgarath wants the book, and it feels as if someone thought kids wouldn’t understand this simplest of plot points.

Also inserted is a somewhat clichéd but complex issue involving a parental separation that may be a bit much for some kids, particularly if they’ve experienced it. As for the film, it strengthens the characters in the early going to give them some motivation to set things in motion.

When it moves, Spiderwick goes by in a blur. You want more, and a brilliant (and beautifully done) closing credits sequence doesn’t help that empty feeling. While it may not be as original as a feature film concept, this is still a thoroughly enjoyable ride for the family. 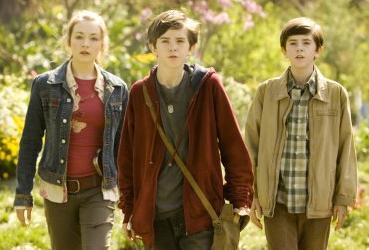 Paramount has done a stunning job transferring the film to hi-def. Colors are perfectly saturated, and offer spot-on flesh tones. Black levels are rich, creating excellent depth in every frame. Detail is routinely spectacular, even in long shots filled with various plants. The overall sharpness is notable as well.

Oddly enough, this TrueHD effort is at its best during low-key scenes, especially early on. Before the full reveal of any creatures, they scurry through the walls effectively in all speakers to create atmosphere. Sadly, when the action kicks in, this remains a front loaded presentation. There’s hardly any notable surround activity, or it’s being overwhelmed by a heavy bass presence.

The meat of the discs extras are seven featurettes, all in HD. It’s All True will probably convince kids this thing is real and cause them to pour honey all over the house, but it’s a funny little piece nonetheless. The standard making-of offers up some nice behind-the-scenes footage, while the rest of the features handle the usual array of effects and cast memories.

A trivia track that plays during the movie will take you to a text/picture “field guide” when prompted, or you could just select the ones you want from the menu. Various snippets and trailers are final piece to this commentary-less disc.