No one is safe in the latest romp for Harold and Kumar, the sequel to the mildly successful 2004 original Harold and Kumar Go to White Castle. Escape from Guantanamo Bay is one day later in this stoner comedy saga, and the two bumbling stars attempt to make a trip to Amsterdam, when this all goes obviously downhill or there wouldn’t be much a movie.

Harold (John Cho) and Kumar (Kal Penn) are instantly likable morons, ending up imprisoned in the infamous Guantanamo Bay after being mistaken for terrorists on a flight. Rob Corddry is hysterical as the racially idiotic agent assigned to their case, pulling out every stereotype he can think of to track down these two “terrorists” once they find a way out of prison.

Misadventure seems to follow Harold and Kumar wherever they go, and it always seems to be lowbrow. Then again, that’s what makes fans come back. No one goes in expecting Shakesperian comedy, and that’s as far away from what you’ll get here as possible. The home video version goes all out to earn its unrated moniker, putting as much unneeded nudity on screen as possible… and flaunting with it hysterically with zooms and pans to ensure, uh, full exposure.

There isn’t a pot joke in the world not used here, and if racial remarks are offensive, skip right past the likely authentic KKK party sequence. Southerners are called out for sibling breeding (and producing some form of unidentified Cyclops spawn in the process), and oh, supporters of George Bush? Yeah, you should maintain a clear 25-foot distance from this disc.

Most importantly, Escape from Guantanamo Bay is funny, even laugh out loud funny at multiple spots. This is undoubtedly zany, absurdly stupid humor (Neil Patrick Harris and a unicorn… that’s all that can be said), but it works. Unless you’re looking to expand your mind, this is light comedic fare worthy of your entertainment dollar. 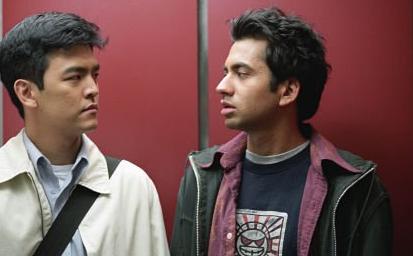 While not mind blowing material, the film does present itself well in HD. While some of the darker, nighttime scenes falter a bit, this transfer is routinely sharp. Rich detail is noticeable throughout. Colors are natural, and contrast is always at a peak level. The black levels truly shine here. It’s not eye-popping, but serviceable enough given the nature of the source.

New Line goes all out with a 7.1 DTS-HD track, which is completely unnecessary. There’s never a moment in the film where the extra rear channels are used, and even the usual surrounds remain indistinct. A slight hint of positional dialogue is noticeable, if ineffective. The soundtrack delivers much of the bass, although there is an impressive plane take-off at one point.

Loaded, packed, and filled are the words that come into mind for this Blu-ray release. Two commentaries, one with the co-directors and their two leading men being the highlight, begins this features set. The second again brings back the directors, along with the inspiration for Cho’s character, and James Adomian constantly performing his George Bush impression.

The World of Harold and Kumar runs a little over 21 minutes, with extensive talk on both films, focusing on the characters. There are 18 deleted scenes running 19 minutes, and nine “extras” which are alternate takes and outtakes. A President Bush PSA is struggling for laughs at two minutes.

After all of that, the niftiest feature is “Dude, Change the Movie.” Taking the place of what ’80s kids will remember as Choose Your Own Adventure books, you can literally alter the fate of the characters, or showcase additional nudity by making the right choices. There are a lot of scenes that use this, some which will alter the plot, or even end the movie early. There’s a lot of fun to be had here, and it’s worth going through the film multiple times.