The hotel sequence in Ghostbusters is brilliant. It may be the most effective scene of its kind in comedy history, purely because of how it sets everything up, from the characters motivations, to the electronics, down to foreshadowing the end of the film. It does it all.

It is impossible to hate any scene that begins with this exchange as the Ghostbusters walk into the hotel, waiting for an elevator:

Bill Murray has already established Venkman as a womanizer, but it’s also important to note he truly is smart. His witty, sarcastic response to Murray Rubin, the man at the elevator, is a perfect line. It is thought up on the fly, treating the man with a sarcastic response as if Venkman is embarrassed to be a part of the group dressed in a brown uniform with glowing lights all over their backs, but still salvaging the moment.

In the elevator, Ray Stantz (Dan Aykroyd) states he has never performed an equipment check. He asks his co-workers to flip the switch as if nothing is wrong despite carrying an unlicensed nuclear accelerator on his back. He stands there unaffected, gleefully taking it in that the backpack works. The others slink away in fear at the chance that it won’t.

The scene continues, briefly showing off the equipment as they accidentally assault a maid’s cleaning cart, and eventually leading into the ballroom where they will catch the first ghost. Here, Egon Spengler (Harold Ramis) fires off a stream from the proton pack with a childlike smile on his face as things blow up from the missed shot. His supposedly “always serious” demeanor breaks down however slightly, letting the audience know he has no problem having fun.

As any movie fan knows, the scene ends with complete and utter destruction, a captured ghost, and a wonderfully amusing moment where prices for the capture are set. That sequence, more than any other, may exist to entertain, but it sets the tone, style, and mood the rest of the movie will carry. It is incredibly important, crafting a stunning visual action sequence that exists for a purpose, not merely to blow things up.

Of course, nearly every moment of Ghostbusters is classic, from the realization the iconic firehouse sits inside a neighborhood that should be labeled a demilitarized zone, Walter Peck’s introduction, to the running of the Stay-Puft Marshmallow Man. It all works, creating a flawless blend of sexual innuendo, unforgettable quotable lines, and those rare movie characters you love from the first moment they’re on screen. Movies can never be more entertaining than this. 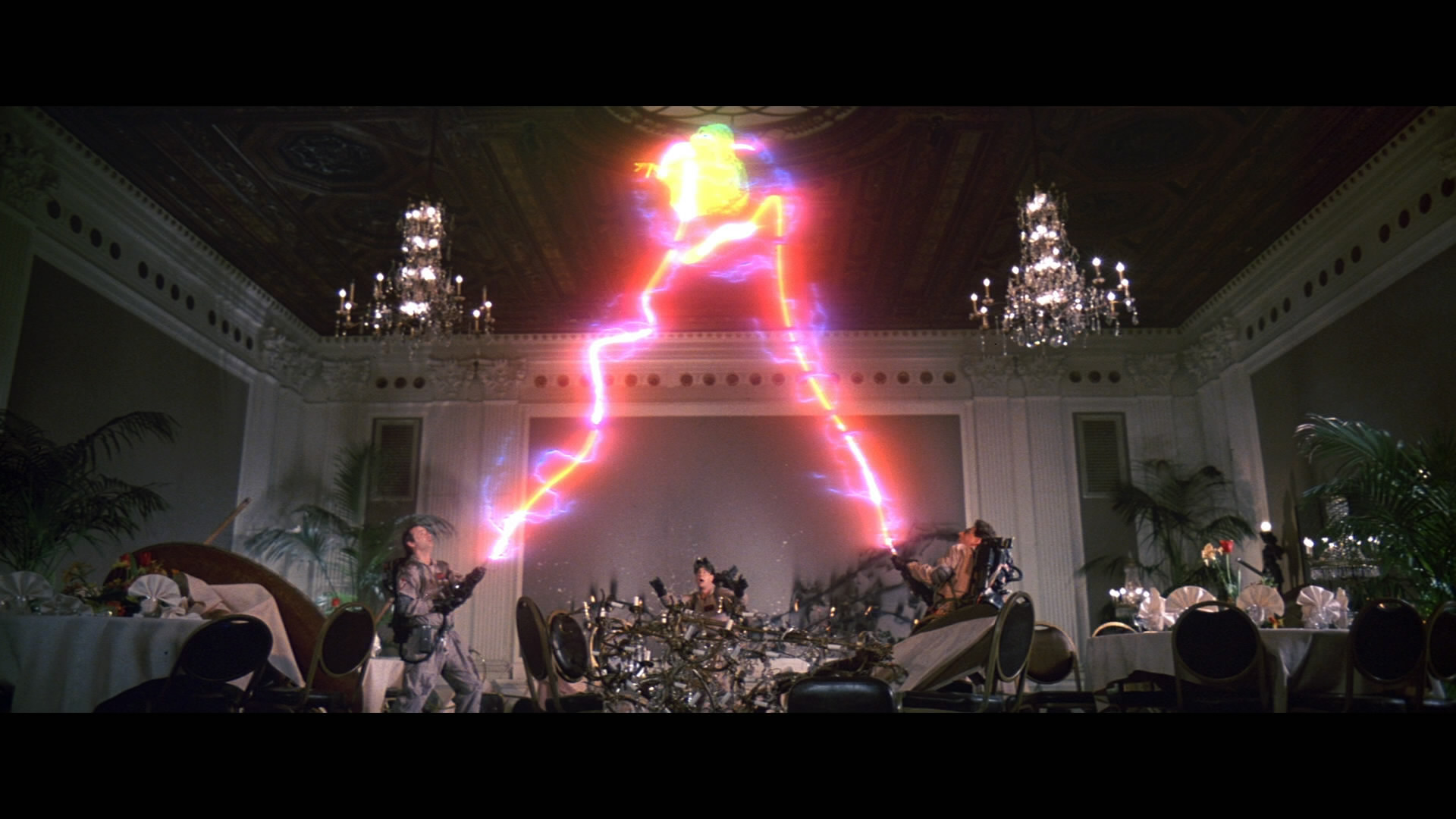 Ghostbusters is going to draw some ire from the community in terms of its video transfer. First things need to be addressed. The original DVD is widely regarded as the superior video transfer; the re-released DVD inside the Ghostbusters box set with the sequel from 2005 has notable contrast and color problems. The Blu-ray edition seems to use the same master from the 2005 disc, although tweaked to find a happy medium between the two.

The first things that jump out are increased vibrancy in the colors (especially primaries), excellent image depth thanks to the black levels, and a notable improvement in all around detail.

As time moves on, one realizes facial textures are non-existent for much of the film, and flesh tones are a rather sickly pasty hue. A consistent grain holds a nice film feel, although the AVC codec has trouble handling some spikes, notably early at the 13:29 and 16:00 markers. Artifacting is evident, giving the grain an unnatural, coarse and noisy feel.

The color problems, such the green blob surrounding Slimer during his capture, have been cleared up and restored to the proper tones. Blooming is still significant during the Zuul finale, washing out any detail in the fog generated by the building. Sharpness is reasonable without any edge enhancement. Fans should be relatively happy with the film’s hi-def debut, as it is certainly a step above the DVD and various HD cable broadcasts. This one is close, but the positives bring this film to life as never before on home video.

The audio elements must have been in significantly better shape than the video, because this disc is impressive. Fidelity is better than expected (although still slightly flat), holding up against the strain of Elmer Bernstein’s wonderful musical themes.

Surrounds are consistently accurate with this TrueHD mix, delivering right from the opening library ghost “Get her!” scene and remaining active in every action scene to follow. The proton packs hum in the low end when turned on, and nicely fill the soundfield with other noise. There’s a fine piece of wrap-around audio when the containment unit shuts down. Slimer huffs in the rear speaker as Venkman discusses how to handle the situation. This is a wonderfully designed mix, although the surrounds do feel artificial.

Yes, you can sell the original DVD as all of the features are here. That out of the way, new features include a picture-in-picture feature called “Slimer Mode” that delivers an excellent documentary spread out during the film along with trivia. It’s a shame this is the only way to watch it. It does make up for the lack of a new commentary, as the disc has the same one used back in 1998 for the first DVD (minus the silhouettes of Ivan Reitman and others pointing at the screen).

Ecto-1: Resurrecting the Classic Car is a wonderful look at how the original car was restored completely for promotional purposes. A photo gallery follows charting the journey to the finished product. Two promos for the video game follow, and BD-Live access allows for Sony’s useless Cinechat feature and downloadable ringtones.

Finally, as stated above, the original DVD features remain, including deleted scenes, a featurette from 1984, split screen views of the effects, and a short featurette with various member of cast and crew discussing the film.

Note: Ghostbusters was picked as one of the “worst of the year” on the Seen in HD podcast. This is partially correct. Prior to going live, myself and Phil Lozen brought up the topic of the worst, and both of us responded with Ghostbusters. While it may seem odd given the high scores above, the selection is more of a result from disappointment, not low quality.

Sony’s use of an artificially brightened transfer is unnatural, and does not reflect how we felt this should have looked. Smoke/fog being emitted from Gozer’s fortress should have a gray scale present, but it does not. It is a blob of white with no detail. The audio is likewise artificial, with pumped up surrounds in attempt to make this sound more modern, but in the end, it only sounds forced.

This is a good disc, but new Blu-ray owners may want to wait for whatever re-release Sony has planned down the road.