Constantine descends into the depths of hell, surrounded by demons, to find an answer as to why a woman (Rachel Weisz) killed herself. The swirling flames, crumbling buildings, and slithering demons create a dark, depressing image. It’s probably the only time you’ll hear that hell looks awesome.

That one scene is the highlight of Constantine, a somewhat miscued action movie starring Keanu Reeves as the title character. He’s an exorcist, or as portrayed in the film, a modern day religion-based Ghostbuster. It’s a straightforward role, requiring little other than some cold stares and a few fight sequences with CG creatures.

The film’s plot revolves around the Spear of Destiny, which has the potential to reek havoc on our world. Half breeds, half human and half angel/demons, walk among us. The rules state they cannot fully enter our world, but for the sake of the story, the rules stop being followed.

Constantine wants the audience to believe in its mish-mash of religious rhetoric, yet anyone who believes in the Bible is going to be turned off, and those that don’t are probably going to be confused (or bored during the extended dialogue).

That leaves a string of relatively exciting action sequences strewn about that offer some thrills. Constantine is built as a demon killer, and does so with flair and style. Still, the brawls feel short, and there are better special effects around to excite moviegoers.

Characters tend to pop in and out of the script at will, the worst case being Shia LaBeouf as Constantine’s cabbie and protégé. He leaves the film for close to an hour, before suddenly being thrust back in to help the demon killer on his mission.

It’s two hours in total, leaving Constantine thin on action, high on awe-inspiring visuals, and lackluster in terms of entertainment value. There’s enough to take-in that you’ll find something to remember Constantine by, although it’s easy to see how much better this could have been. 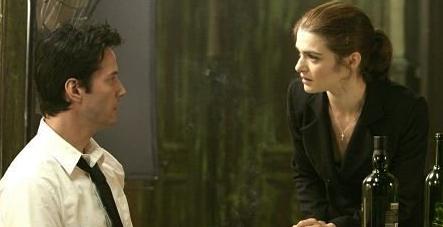 Warner shares the HD DVD encode for this Blu-ray release, resulting in a crisp and clear presentation with some problems. Black levels are impressive, although some black crush is a problem throughout. Flesh tones carry a neon orange hue at times, although color is otherwise under control.

Contrast is calibrated well, and detail can be outstanding. However, there’s a level of over processing at work here, especially noticeable on Keanu’s face around the 19-minute mark. The VC-1 encode also causes some banding early at the 13:40 mark on the nighttime sky. A long shot of the city as night also shows minor instance of noise. It’s an encode with potential for a future release with less tinkering.

The only issue with this TrueHD mix is one of volume. Dialogue is routinely difficult to hear, and characters whisper a staggering amount of words. Turning it up results in the action becoming overbearing.

If you can handle the problem, then this is a fine effort all around. Action sequences, especially the insect demon fight in the street and Constantine’s visit to hell are impressive. The low end routinely gets a heavy workout, whether it’s from punches, bodies falling, or the soundtrack. Constantine has some fun moments of ambient noise, including rain falling and cars passing through.

Two commentaries are included to kick things off. Track one has director Francis Lawrence and producer Akiva Goldsman, while the follow-up features the screenwriting duo of Kevin Brodbin and Frank Cappello. A selection of fourteen featurettes are only viewable separately, annoying to the viewer who must head back to the menu after a few minutes to see the next. Would a play all option have been too much to ask for?

That said, there’s 90 minutes of mixed quality content here, and the featurettes are quite varied, from special effects to the mythology to the original graphic novel it was based on. Clips from these and the commentary are mixed into a picture-in-picture feature if you want to watch them that way. Fourteen deleted scenes total 17 minutes, including an alternate ending (and optional commentary). A music video and the expected round of trailers are left.