Louis Salinger is on the trail of an assassin. After his partner is hit with the assassin’s car, he must take off on foot. Luckily, traffic has blocked the escape attempt. Salinger draws his gun in the middle of the jam when he spots the car with the broken windshield, yelling at the supposed assassin to put his hands up.

That has potential to be a tense moment, and that is obviously the intent. However, other cars in the traffic casually drive around, blissfully unaware that a man with a gun is standing in the middle of the road pointing his weapon in their direction as well. Does this situation happen so often drivers ignore it?

That’s a critical problem with The International, the story of a large corrupt bank that was luckily (for the studio) held back for a theatrical release right in time for the current economic crisis. There is a lack of tension, and significant wasted time, pulling the audience out of the story despite fine direction and cinematography throughout.

The above sequence would have worked with innocent civilians fleeing their vehicles around Salinger (Clive Owen), making his job more difficult and adding a desperately needed sense of panic. It would work logically and in the favor of the sequence.

More evidence of the lack of tension comes during an investigation sequence following the assassination of a political candidate. The audience is given the necessary details beforehand, including the multiple bullets and different shooters being used. Still, it is deemed necessary to have Salinger and Eleanor Whitman (Naomi Watts) follow standard procedure as they investigate.

Why waste the time if the audience knows? There is no mystery. Either don’t play your hand before the scene, or skip past the investigation entirely, dealing with it in dialogue later.

International does have a bright spot, a stunningly gorgeous action sequence inside a flawless recreation of the Guggenheim museum. The spiraling design delivers intensity, and the countless number of shattered glass fragments are an exciting visual treat.

Credit is due to director Tom Tykwer and cinematographer Frank Griebe for giving this thriller a sense of visual style, including fantastic overhead pans of various cities. There is also a superb shot of Owen alone on the steps of the corrupt IBBC bank’s steps that takes on a life of its own. It’s a shame the script doesn’t have the same sense of wonder and impact. 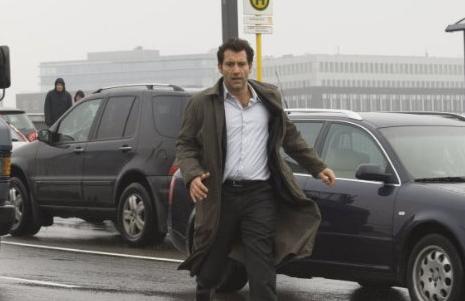 International is close to perfection. This AVC encode is impressive in the opening moments, delivering an astonishing level of facial detail. Those beautiful long shots of the locations hold up remarkably well in the transition to home, without an ounce of aliasing or flicker. Contrast is bright (and runs slightly hot), while the black levels create the sense of depth you want with every Blu-ray. Shadow delineation is perfect unless black crush is intentional.

Color and flesh tones are spot on consistently. Everything appears natural, and a wonderful film grain is handled without artifacting problems.

Sadly, there are enough detail drops to keep this from perfection. Watch Clive Owen’s face around the 17:30 mark, where facial texture suddenly drops off completely. This happens a few more times throughout. Some rather obvious edging is noticed around the hour and ten-minute mark, although again, it happens elsewhere too. Consider this just off the mark by a miniscule amount.

Obviously, the full-on shootout inside the Guggenheim is the show stealer here in terms of audio. The TrueHD mix delivers great punch on the low end when guns begin firing, and the surrounds, although somewhat lacking directionality, deliver as they should. Hearing the glass shatter in all channels is undeniably impressive.

Non-action scenes deliver a fine level of ambiance, including a political rally and airport stop. Cities are alive with activity, and dialogue is consistently audible.

A picture-in-picture feature delivers on the technical side of the extras, although how many people choose to watch the movie (or interrupt it if your prefer) with short featurettes is likely small. A commentary from director Tom Tykwer and writer Eric Singer is a better choice. At least it is consistent.

A single extended scene is followed by the longest piece on a disc, a 30-minute making of that is slightly more interesting than the usual extra of its kind. Shooting the Guggenheim is a look at building the extensive set, followed by a look at the building used for the IBBC bank, and the architecture featured in the film. A downloadable featurette is available via BD-Live, along with the baffling Sony CineChat.