Take some Aliens. Toss in a Predator. Slap them into a small defenseless town. How do you screw this up?

Alien vs. Predator Requiem is the incomprehensible sequel to an equally bland mash up from 2004. Fans of both franchises are sure to be distraught over the sequel, which destroys rules and plotlines set up by other films.

The Aliens have a 24-hour gestation period before bursting out in style through some poor sucker’s chest as we were told in the previous Alien movies. Here, it’s about 24 seconds. Alien blood is acidic and can tear someone’s arm off. Later in the movie, it can’t cut through glass.

Fans of the Predator fare slightly better, though things are equally unexplainable. Actually, nothing is explained, and if you’re only slightly familiar with the series, you’ll be lost as to what’s going on. Why does the Predator dissolve some victims, and skin others? Why does the Predator head to Earth in the first place — to save humans or for revenge? Why do they only send one Predator?

The movie’s incredible pacing (not in a good way) leads to zero character development. Some little girl disappears for upwards of 20 minutes, then inexplicably returns for no apparent reason. It’s hard to follow any action when it involves humans since they have no backstory or reason for being. You don’t care that they’re being killed unless it’s brutally gory. The blood is more memorable than the people themselves.

Loads of action is the style here (along with the boatloads of gore), but it’s as ridiculous as the character development. The rapid fire cuts and ridiculously low lighting means trying to follow the fights is pointless. It’s as if they were embarrassed by the practical, suit-based special effects and attempted to hide them as often as possible. From what can be made out, there’s no reason for it, and the Predator/Alien hybrid looks great.

Cringe-worthy dialogue carries the early part of the film. Characters are terrible, Sci-Fi Channel movie clichés, and setting this in “small town America” opens the movie up to a wider array of things lifted from those impossible to watch schlock fests.

People do dumb things on a regular basis, and it becomes a non-stop, unintentional laugh fest. Some characters apparently don’t have spare keys and choose to stick their hands into raw sewage to look for theirs after losing them. A few teens choose to have sex in the school’s pool and don’t lock the door behind them (and are clearly in front of a window).

There’s a great movie in this concept waiting to be made. This second chance is sadly not the success it could have been. If this is a financial failure, we may never see a third attempt. If it does happen, we can only hope viewers can make out what’s actually happening on screen during the action scenes. 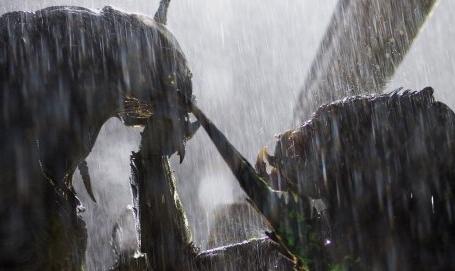 The low lighting doesn’t allow for the purity of this transfer to show through often. Video is sharp and detailed, and noticeably so when you can catch glimpses of anything in the light. Black levels  either crush or the source material is impossible to transfer without the problem. There’s no way to tell. Colors are strong and not oversaturated.

Bass is the highlight of this stunning audio mix. The depth, clarity, and power of the LFE channel is astonishing at times. The surround channels are consistently active. Action scenes are loaded with the smallest touches. Lighter scenes feature loads of immersive activity, such as the typical array of forest sounds and the sewer is amazing with dripping water and echoes.

Two commentaries are included here, one from the enthusiastic co-directors Greg and Colin Strause. The second is from the special effects team and they go in-depth about the need for suits and CG. Five featurettes go into the making of the film, with loads of footage behind the scenes and shots from other movies in both franchises for comparison, not time padding. They run close to an hour totaled all together.

An “added footage marker” points out the small differences in the unrated cut when new scenes pop up. The Weyland/Yutani Archives is a pop-up feature that actually goes quite in depth into the history of the films and the creatures. There are a lot of options to play with, making this an above average pop-up extra.