For a while, especially within the first 30 minutes, My Bloody Valentine 3-D is the greatest homage to slasher movies ever made. The kills are priceless and ridiculously gory. The characters do insanely stupid things to put themselves in the path of the killer. The one-liners and acting are so stupid you’ll have a great time.

Oh, and you’ll also bear witness to the single most embarrassing gratuitous nudity scene in the history of movies.

Sadly, that fun doesn’t last. Once past the initial set up, you’ll be stuck with watching Jensen Ackles try to rekindle a failed past relationship. This is filled with acting, dialogue, and pacing below the bar set for a typical soap opera on all three counts. The local small town sheriff (Axel Palmer) is as clichéd as they come, and his deputy may be the single worst token black guy ever. In fact, poor Edi Gathegi may have set a new standard for that cliche by adding nothing to the plot, nor having any real character.

When the action picks up, credit goes to director Patrick Lussier for knowing how to film some great shots of the killer. There’s a fantastic moment with Ackles facing off with the murderer side-by-side, and numerous creep outs of the pickaxe murdering psycho set against a backlight. While pickaxe kills do eventually run their course, there’s nothing like seeing a guy have his jaw ripped clean off while having it tossed towards the screen. Gory and effective.

Credit is also due for a tensely handled twist ending, one that is both a surprise and fan service for those who have seen the original. The face-off between potential killers is a classic, nearly making up for the farce that was the romance debacle earlier.

Still, the downtime here makes this one go on longer than it should by at least 15 minutes. The only memorable moments are the kills and the finale, with the rest amounting to pure schlock on the level of a low budget TV series aimed at tweens. Not that one should expect much from something called My Bloody Valentine 3-D, but the kill to dialogue ratio is completely out of sorts. 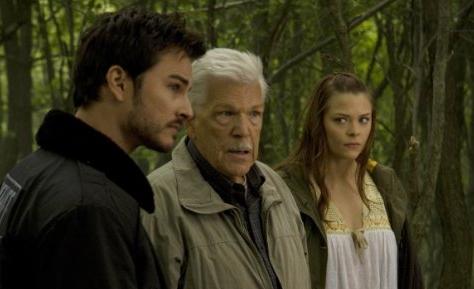 Coming in both 3-D and 2-D varieties, consider the video score based on the 2-D version alone. Critiquing the 3-D version in terms of video is pointless given the nature of the colored glasses. While the effect is marginally better than the red/blue glasses of old, the cardboard green/purple glasses included are less than stellar in terms of their ability to replicate the theatrical experience.

That said, everything was shot digitally, which leads to a number of issues. Flat color and muted blacks are less than impressive. Despite the sharpness, detail is surprisingly limited. Faces appear flat. High-end contrast is excellent without blooming. There’s a jarring motion blur to the proceedings, likely part of the original source.

The source itself is pristine, as it should be. There were no instances of video noise or artifacting. A high bitrate AVC encode can be thanked for that.

Lionsgate once again delivers a powerful DTS-HD 7.1 Master mix, and while effective, does sound forced. Towards the end of the film, the killer is walking up behind his victim. His footsteps resonate in the extra left rear channel, but it is significantly louder and artificially boosted. The effect is anything but natural.

Still, there are some fun scares to be had. The quiet grocery store delivers some freakouts effectively as the pickaxe killer moves around the store. Objects thrown towards the screen track well into all channels. Positional dialogue is evident on a few occasions. Bass is thick and aggressive, whether from the throbbing soundtrack or the murderers blows to his victims. It’s all in great fun, if not a bit forced.

A commentary from director Patrick Lussier and writer Todd Farmer talks about the various aspects of the shoot. Deep Inside My Bloody Valentine discusses the shoot inside a real mine, with the usual self-congratulatory edge. Sex, Blood, and Screams is an excellent tour of the props used in the various kills. It’s a shame it isn’t longer than six minutes.

Fourteen deleted and extended scenes add nothing to the film, as do most of the scenes actually kept in. A separate alternate ending doesn’t change much. A brief gag reel has some mild laughs, followed by a trailer.

Note: To play the 3-D version, you have to select “play movie.” You can’t swap mid-film, and you cannot go to scene select. It is admittedly annoying not to have the option if you want to quickly skip to a specific scene from the chapter menu in 3-D.