Leigh Teabing (Ian McKellen), Robert Langford (Tom Hanks), and Sophie Neveu (Audrey Tautou) sit down to discuss the plot of Ron Howard’s spin on the novel Da Vinci Code. It is a scene where the film either grabs the viewer, or completely looses them in a nonsensical, drawn out sequence of religious babble.

In fact, Langford states, “The eye sees what it wants to see.” That’s this entire plot. Dan Brown’s story, despite supposedly based in reality, is so hilariously convoluted, believing it is your first mistake. The story goes everywhere, and believing any of this could have held true over thousands of years of human history is completely absurd.

The entire debate about religion and Catholic church feels forced. Again, the above sequence where the three characters meet is a perfect example. All of the explaining that goes on, for the better part of 10 or 15 minutes, seems directed at the audience, not the characters. Dialogue is unnatural, and since the characters are already well aware of what is being said, there’s no need for them to say it.

Constant flashbacks feel like narration, not part of the plot. Every intricate detail is laid out, and by the end is such a ridiculously convoluted mess, it’s utterly amazing the church made it out to be the downfall of their beliefs. Anyone who believes this plot to disguise the truly holy grail likely wears tin foil hats anyway.

Police exist in the film for little more than to push the characters from location to location. Not to harp on it, but that three-way conversation again shows where the film goes wrong yet again. The police conveniently arrive after the conversation is over, just in time for the main characters to finish telling the audience everything they know.

Howard’s direction is fine, utilizing some wonderful sweeping shots to set up locations. Production values are high, and there’s little question the locations are wonderful to look at. It’s a shame the plot contained inside them is borderline insanity.

The Blu-ray contains an exclusive director’s cut, the first time it is available in America. One of the scenes added is hilariously hokey. Sophie holds up a Da Vinci painting, holding it hostage as a museum guard threatens to shoot her. Sophie’s threat works, and given that Sophie and Robert are suspected as murderers at this point of the film, it was best left on the cutting room floor.

The Da Vinci Code’s grand explanation to the location of its own version of the holy grail is that it “sits under starry skies.” Wouldn’t that be the entire planet since it’s buried underground? That riddle is as ridiculous as anything else this mess tries to throw at the audience. 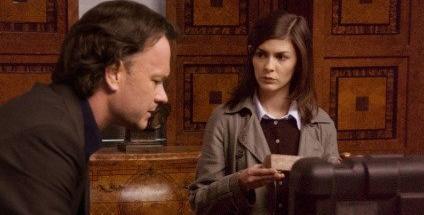 The film carries a flat, muddy AVC encode for its hi-def debut. Black levels are lackluster and fail to create convincing depth. Contrast is murky. Detail is flat although does sporadically spike into the high end.

Much of the film looks significantly smoothed over. Sharpness is low. Both are likely intentional choices. Color and flesh tones are strong. Flashbacks are intentionally noisy and blown out.

Aside from a few guns firing to deliver on the low end, much of this TrueHD tracks finer moments are left to the brief flashbacks. An earthquake is particularly impressive, with throbbing bass and rubble falling around the viewer. Dialogue is well inserted into the mix and consistently audible.

Sony releases the film in a two disc set, one which lists quite a bit on the back of the case, but amounts to little. A limited commentary from Ron Howard is only available on select scenes. Why only those scenes? He never says. An annoying picture-in-picture features forces the viewer to constantly select icons on the top of the screen to see all available content from eight different categories. Make the content viewable elsewhere on the disc movie studios. Generic BD-Live support and likewise wasteful CineChat options end the first disc.

The second annoying disc splits one extended feature into a number of smaller ones. The majority are self-congratulatory, although Magical Places deserves some credit for at least attempting to address the controversies the film brought with it. There are 17 featurettes total, meaning you’ll need to drop back to the menu that number of times to access them all. Annoying and unnecessary no matter how great the content is.

Also, users of a 2.35:1 constant image height screen should note the necessary subtitles appear below the image.