While at times unexplained and crammed into a 100-minute movie, the Hollywood big budget adaptation of Douglas Adam’s Hitchhiker’s Guide to the Galaxy is still wonderfully funny. The tone and style are perfect, and the budget behind it gives it a great visual flair. A solid cast doesn’t hurt, either.

The story of one man’s unplanned exit from the Earth before it’s destroyed to make room for an intergalactic thruway has been told many times. Radio, TV, books, and finally a major feature have made this same story a well known one amongst the sci-fi crowd. Any changes could incite a revolt.

The movie doesn’t change much. The difference is how much is missing. Certain plot points either don’t exist or are unexplained. The towels are consistently brought up, and yet never fully realized as a plot point. Those who are unaware of the story will undoubtedly be confused, and miss quite a bit of the humor. Fans will still get it all.

Still, for a 100-minute feature (as opposed to a three-hour plus mini-series), a lot of territory is covered. The jokes and small gags work effectively to keep audiences entertained. Martin Freeman is wonderful as average guy Arthur Dent, and Zooey Deschanel as his love interest makes for a perfect pair. Alan Rickman is a show stealer in many of his scenes as the voice of depressed robot Marvin.

Extra credit goes to the effects team. They use traditional methods consistently and it works immensely well. The sets are wonderful, and the suit work is impressive, to say the least.

While it may not have all the answers to life, the universe, and everything, Hitchhiker’s is a fun, enjoyable romp. It’s not for newcomers, but for the die-hard fans who had waited an exceptionally long period of time for it to finally happen. Knowledge of the book, TV series, or radio show are almost necessities before sitting down and grasping the full story. With that background in hand, this is a fine adaptation. 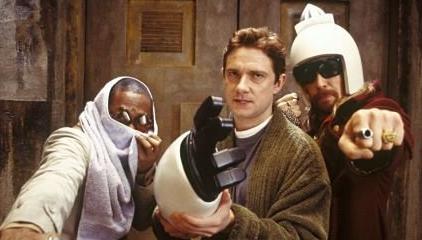 This is a beautiful yet flawed Blu-ray effort. Sharpness, clarity, and detail are high. Brilliant, bold color showcases a full spectrum of hues. Contrast creates perfect black levels and solid whites. The transfer comes into trouble with noise and fluctuating grain levels. Every background is littered with either of the two, and it can become a serious distraction at its worst.

An active sound field carries the movie throughout. The rumbling bass that signals incoming ships is spectacular. Laser gun fire does a fine job of filling each speaker. Non-action scenes still maintain some atmosphere with jungle sounds on distant planets or crowded areas filling with muffled chatter.

Extras are a complete disappointment, and not all of the features from the SD DVD are included. Three deleted scenes don’t flesh out some of the unanswered questions left by this version of the story, and the “really deleted scenes” are simply extended outtakes. An additional guide entry may as well have been included in the deleted scenes, and two commentaries are here as well. One comes from Adam’s collaborators and would be the one for fans.