The Prestige is an amazingly complex film, one that begins to spiral out of control (in a good way) during the final half hour. Every one of its scenes are important to its eventual finale that offers numerous twists to what initially appears to be a simple tale of magicians trying to one up each other. Where it ends up is a weird, twisted ending that’s not going to appeal to everyone.

Hugh Jackman and Christian Bale play completely insane magicians in the late 1800s, turned against each other after a tragic accident on stage. Just when one of them seems to be turning into the good guy, he does something deplorable to drop him down a notch. Neither character is likeable, and the entire film is a dark, depressing tale about over-ambition gone to the extreme.

Christopher Nolan directs with style, keeping the tone grim and the characters complex. Prestige requires the utmost attention from its viewer. Its out of sequence storytelling is at times jarring, and its pace may seem slow, but it’s done this way to weave a complicated story on purpose. Chronologically, the story wouldn’t hold.

Where Prestige may lose people is the ending, which relies on science fiction. While there are hints that the film is going to break reality, it also strives to show off how the tricks are performed in a logical sense. There’s literally no way to guess the outcome earlier than the reveal based purely on the film’s means of establishing reality.

In that sense, it’s a cheap way out. The movie is constantly showing the audience tricks that are plausible in the real world, and uses one that isn’t to end its story. That’s not particularly fair. On the other hand, it’s an ending that makes you think long after it’s over, both for its moral implications and everything that came before. It practically requires a second viewing once you’re aware of how it all comes together.

That said, there are number of occurrences introduced and unexplained (such as why there are 100 performances of Angier’s show) that linger when it’s over. It doesn’t matter how many times you view Prestige; it chooses not to address certain issues. Still, this is a well-acted piece, filled with superb sets and sharp writing to keep the story together despite jumping around in terms of time. How you feel about the end product as whole will depend on your suspension of disbelief. 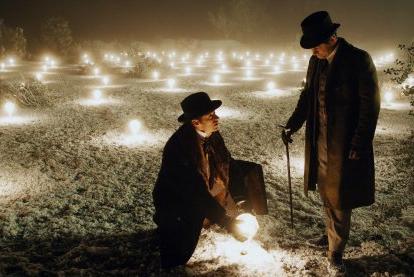 Prestige comes to Blu-ray in a solid, at times phenomenal AVC encode. Loaded with fine details and a razor sharp look, the film comes through beautifully. Contrast is superb, never too bright like so many other modern films and never too dark to blot out shadow detail. However, it still maintains an excellent sense of depth. On the negative side, there are times when the image looks overly processed, such as the pan shot of a train spiraling around a mountain. There is some occasional softness, noticeable during the first meeting with Tesla.

Uncompressed and excellently handled, this is a fine PCM mix from Buena Vista. It succeeds at subtlety, including high-end environmental effects from the clapping crowds cheering on the main character’s acts. There’s little question the meat of the audio work comes from the crackling tesla coils, surrounding the viewer like the character in the film. They also provide some fine low-end work as they dry up. It’s a beefy mix from a dialogue driven film, and that’s always impressive.

Extras are bound to do nothing but disappoint. Director’s Showcase is a collection of six short chapters on various topics. It provides behind-the-scenes footage, brief insights from Nolan, and a little history on the real Nikola Tesla. In total, it’s 20 minutes of content. The only other meager extra is a selection of photo galleries.