Imagine this scenario: Your daughter, somewhere in the realm of her sweet sixteen, brings home a new boyfriend. He looks a little off, and your daughter states, “Mom, dad, this is Edward. He’s the coolest. Oh, and he runs around the forest sucking the life out of deer because he’s a vampire! We’re dating.”

While not the plot of teen sensation Twilight, at some point during this movies mythology, that conversation will have to happen. One would assume it wouldn’t go well.

Edward (Robert Pattinson), a vampire, and Bella (Kristen Stewart) are the lead couple headed for that situation. Bella, having just moved to a new town, is immediately accepted by the student body. For some inexplicable reason, she’s intrigued by the pale-faced Edward. Maybe it’s teenage rebellion, maybe it’s curiosity, but the two are instantly drawn to each other.

The story begins however in Small Town USA, where the local sheriff is the key law enforcement, and high school teenagers are the rule, not the exception. Also, a few mysterious “animal attacks” are causing the locals to become restless. Isn’t this the set-up for every grade-Z creature feature ever made?

As the film states, these vampires sparkle in the sunlight, a concept that seems to exist purely to make teen girls go crazy over the sight of a hot male lead glowing. There doesn’t seem to be any logical reason for them to shine this way in terms of their evolution, i.e., they’re skin isn’t super strong or diamond encrusted, and it would make hunting all but impossible on sunny days. They don’t seem to hunt at night either (their sight isn’t stated to be better during darkness either), but choose foggy, cloudy days.

At one point, Edward tells Bella why he skips school during sun-filled days by saying, “People would know we’re different.” Most of the kids already do. There’s also an issue Dr. Carlisle Cullen (Peter Facinelli). His pale face and supposedly cold skin makes it impossible to believe any normal patient would want to be seen by him. He’s a nice guy but looks dead, not the best look for a health care professional. Wouldn’t a physical be necessary at some point to get a medical license too?

The vampire lore is a key problem with Twilight. It’s more of an afterthought, plugged in to offer some originality to a dry, rather unspectacular romance. The budding couple go through all of the usual teen relationship emotional pitfalls, many of which could have been done in any other setting. There’s nothing original or new brought the teen romance genre.

Villains are briefly introduced into the script, apparently here for nothing more than a quick snack on the locals before moving on. They’re incredibly underdeveloped, although share the same mythology with the exception that they still kill people instead of forest animals.

The good vampires meet the evil vampires during an absurd baseball game that causes more logistical issues with the lore (they die by being burned, yet play with metal bats in a lighting storm?). The finale, as predicted, leads to some minor action as the vampire tribes brawl in a visually fun ballroom. It’s used to show Edward as the good guy, making an effort to save Bella from certain doom (or something else).

Twilight closes on the prom, where Edward’s skin has somehow managed to gain color, with Bella in his arms. It sets up a sequel in which the band of Indian werewolves (!) are distraught over the vampires for walking on their land. There’s more intrigue created by how poorly the series will handle the werewolf mythology than how these characters will evolve. That’s never a good thing. 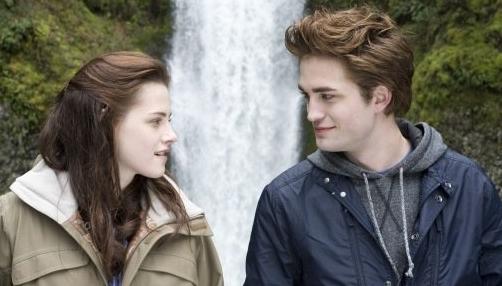 Twilight is near-perfection on Blu-ray. Immediately apparent are superb black levels, creating wonderful image depth. Colors, despite the film being coated in a light blue tint, are still fairly striking. Contrast is well controlled, bright, and the whites are free of noise. The white faces and powdered make-up on the actors tends to obscure finer detail, but it’s obvious this is not a transfer flaw.

Shadow delineation is excellent, and sharpness is consistently perfect. Slight edging is visible, and some minor aliasing can be spotted on the bricks of the high school. Every complaint is nitpicky and minor.

There’s little subtlety in this DTS-HD mix. The film’s sound design doesn’t offer much beyond some low-end thumps generated by the light action or music. The forest is barren in terms of ambiance, and the soundtrack barely bleeds into the surrounds. Stereo channels mildly come into play without little immersive effect. At the very least, dialogue is clear, the highs are crisp, and volume doesn’t require adjustment.

A commentary track from director Catherine Hardwick, Robert Pattinson, and Kristen Stewart is only disappointing in that the book’s author isn’t heard from. Ten total deleted and extended scenes (five each) fill in minor details at best, and a selection of music videos are included that should appeal to the target audience.

The meat of the disc comes from a collection of seven featurettes titled The Adventure Begins. These can be viewed separately or via picture-in-picture. It’s somewhat padded with footage from the movie, but does deliver in terms of in-depth making-of material during a full hour of content. A short feature on a Comic Con appearance, some trailers, and generic BD-Live support remain.