Since when did technology become the latest enemy in Hollywood? Live Free Die Hard had it working against the populace, Enemy of the State used it freely, Wall-E blamed it for our downfall, and of course classics like Terminator 2 made it seem like we’re creating our own apocalypse. For Eagle Eye, it’s too late into the game, not to mention far too ridiculous to keep the audience engaged.

Shia LaBeouf stars alongside Michelle Monaghan as two people thrown into a mystery though their cell phones. Unbeknownst to them, they’re slowly becoming unwilling terrorists, and the perpetrator is a mysterious woman who apparently controls America’s technology. For the first hour, this works.

It’s an intense ride, filled with high energy action, stunts worthy of the film’s budget, and visual effects well worth the price of admission. The mystery is excellent, filled with intrigue and suspense. Once the actual perpetrator is revealed, everything falls apart.

The ridiculous, inept, and stupid cause of LeBeouf’s problems is the type of reveal that kills a film dead. It makes you look back and realize how force fed the concept was previously. The action devolves into a hilariously campy baggage chase at an airport, a far cry from the countless crashing cars a mere half hour or so prior. The movie’s attempts to make this seem plausible doesn’t fly, and is too far-fetched for a movie trying to be taken seriously.

Marketed as science fiction, maybe it would have made sense. At least then the villain reveal would have been tolerable, and maybe there was a chance for this to succeed as entertainment and not mindless escapism. The film would still have problems, including a brain dead, illogical ending that wraps things up with a proverbial pretty little red bow far too conveniently. It’s a shame Eagle Eye doesn’t try harder. 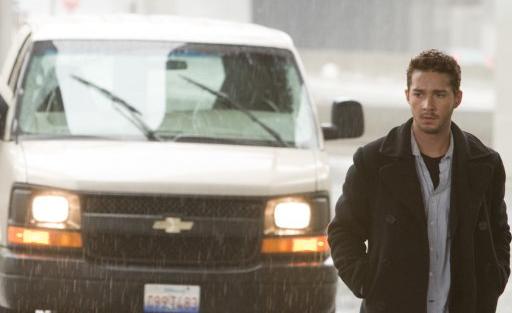 Superb is the first thing that comes to mind when viewing this video transfer. Sharpness and wonderfully calibrated contrast are apparent immediately, with incredibly loaded detail to follow. Color is exceptional, black levels calibrated perfectly, and the source is flawless (as expected). There are the occasional scenes where flesh tones appear pasty, but these are quick to pass, and likely a result of the sometimes muted color.

Eagle Eye delivers a fine TrueHD mix, delivering on almost all counts. The ability of this track to follow the action on screen is phenomenal. The opening car chase is undoubtedly new demo material. The highs are crisp, although the bass can flatten at times. Cars smashing into other don’t have the impact they should. That said, the audio succeeds even with minor ambience, such as the bar scene early in the film.

Nothing is worse than a set of extras that exist purely for promotional reasons, or to try and strengthen the concept. That’s what everything here tries to do. Asymmetrical Warfare is the longest piece, a making-of that deals more with the technology than anything else. On Location is a short featurette detailing the D.C. filming, Is My Cell Phone Spying on Me? exists purely to help people who wear tinfoil believe themselves, and Road Trip has the actors discussing the constant moving around to film on different locations.

Shall We Play a Game is a face-to-face meeting between director D.J. Caruso and John Badham, who met filming Wargames back in the ‘80s. A gag reel follows of some funny clips from the set, and four deleted scenes include a wisely cut alternate ending. A photo gallery and trailer end this weak set of extras.