A movie that is entirely from the “and now for something completely different” category, 1988’s Beetlejuice is bizarre even by Tim Burton standards. It’s also original, funny, and dark. While it may seem to be the norm from Burton after Corpse Bride and Nightmare Before Christmas, in ’88 there was nothing even close to the insanity of BeetleJuice.

Despite the title, Beetlejuice is a secondary character, and that’s the films biggest flaw. This one actually belongs to Alec Baldwin and Geena Davis. They’ve recently died, and quickly come to the realization in some of the film’s best dark humor. Instead of worrying about their deaths, they’re far more concerned with their home and the uptight couple moving in.

The rules are established quickly for the afterlife, including how Davis and Baldwin can scare the people out of their house. When that doesn’t work after 45 minutes of movie time, in steps Michael Keaton who seems to relish the role of Beetlejuice. His charisma brings to life every scene he’s in, and his surprisingly raunchy one-liners (for a PG) are priceless.

As one should expect, Beetlejuice is completely unpredictable, not to mention zany to the nth degree. The fantasy setting is used to create vivid images, partially thanks to Burton’s love for stop motion and another partial thanks to the Oscar winning make-up effects. None of the creature effects would be terribly frightening for a young child, although they may leave a small mark on someone under 10. Oh, and nothing (absolutely nothing) will ever beat the comedy factor of seeing shrunken head man for the first time. Nothing.

As inventive as it is insane, looking back on Beetlejuice shows how little Burton has changed over the years. That’s not a bad thing. No one could have handled this film in the same way, and it wouldn’t be a near classic without his touch. Still a shame Keaton has so little screen time. 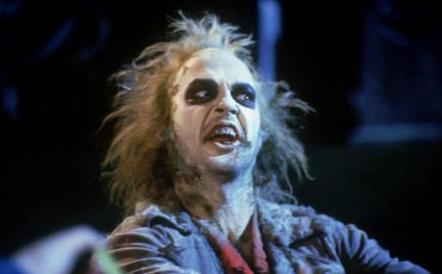 Beetlejuice is meant to be dark, though it’s hard to believe it should be this dark. Black crush is evident everywhere, masking detail or even important parts of the picture. It’s better in the second half of the film, but in the early going, it’s flat out terrible. If you can get past that, you’ll find a decent looking transfer, bursting with color. It’s somewhat soft, though for its age this is more than reasonable. The print doesn’t have a speck on it, and close-ups can deliver some excellent fine detail. A hint of artifacting is noticeable in the reds, though thankfully not the result of DNR.

It should also be noted this is slightly opened up from the film’s original 1.85:1 aspect ratio. It’s been formatted to fit the standard 1.78:1 shape of your TV. The difference is negligible, and likely not even noticeable to purists.

The film sounds dated despite an uncompressed TrueHD mix. Elfman’s score fills the stage, but never quite reaches a point where it sounds clear. Dialogue is likewise flat and lacking clarity. Surround effects sound forced, although there are a number of excellent uses of the stereo channels. There’s not much to be excited about here.

A soundtrack CD comes in the case, likely to make up for the non-existent extras on the Blu-ray itself. Three episodes of the cartoon series (lacking any of the raunch or fun of the film in awful SD quality) are included along with an isolated 5.1 music track and trailer.